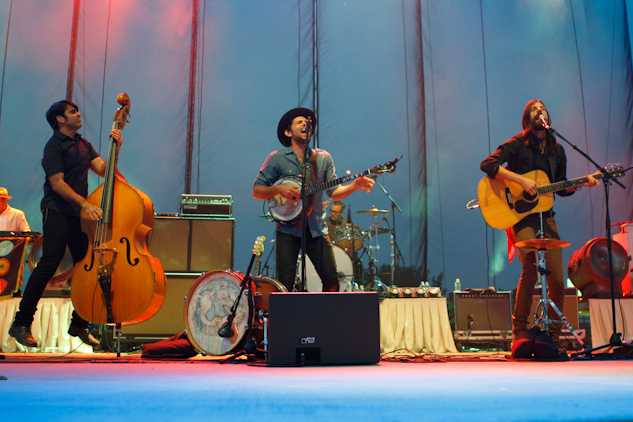 Thousands of loyal fans made the short trek beyond the Twin Cities Metro for the much anticipated Avett Brothers at Somerset show on Saturday, June 29. With three great supporting acts before the main event, the crowd took in hours of great music that was really suited to being played outdoors. Like every other day so far this summer, dark clouds passed by at times, but it remained dry and eventually ended up a perfect night to be outside with a whole bunch of fellow music lovers.

Austin, TX band the Wheeler Brothers opened up the show with an upbeat, energetic set. Their sound is easily likable driven by nice vocal tone and good harmonies. This group is consistently selling out shows in their hometown and will be one to watch.

With their unique sound, Dr. Dog speaks to a more select group of fans. Having six band members, they produced a big sound with no two songs sounding the same. At times, the vocals were Dylan like and their 60’s influence gave hints at some stylings of the Beatles.

The crowd was delighted when Brandi Carlile took the stage. She and her band seemed very much in their element and were first rate entertainers. Their dynamic set ranged from the upbeat “Hard Way Home” to acoustic standouts like “Keep Your Heart Young.” Carlile’s voice sounded strong as ever as she got everyone to their feet for their version of “Folsum Prison Blues” a fan favorite.

The Avett Brothers are possibly the best example of how the live music experience can be far beyond what you might expect from listening to the recorded material. Although their music certainly deserves the increased critical acclaim they’ve been enjoying with the release of I and Love and You and The Carpenter, their ambitious live performances have certainly played a role in their success. The audience was supercharged as the band began their performance with one of the best songs off the new album, “Live and Die.” Their set proved to be entertaining as expected with standouts like “I and Love and You.”

With updated facilities and the recent addition of a nice wooden saloon, the Somerset Amphitheater is able to nicely accommodate a good size crowd for a big name music event like this. Beautiful trees make up the natural backdrop for the giant stage with a nice open feel and plenty of space for the sound to travel. Plus, you can take your concert experience to the next level with camping facilities and the added thrill of tubing down the Apple River.

The four bands music fit well together as a show, but individually they have attracted different fans, which resulted in a nice mixed crowd. The college crowd and Cities 97 listeners were clearly out in force for The Avett Brothers with some having familiarity of Dr. Dog’s material. Brandi Carlile has her own established fan base that covers all ages and includes a favorable presence from LGBT community. Although the Wheeler Brothers were unknown to most, they proved to be a band that anyone can enjoy as this audience did.