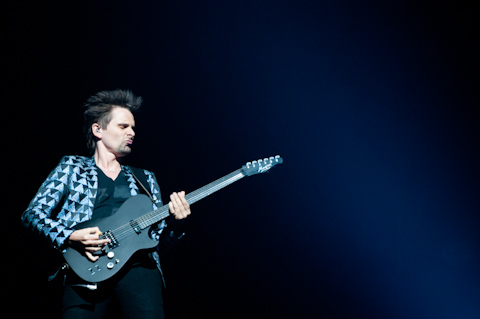 Whether or not you know me, before you read this review you should know just one thing: I used to be a die-hard Muse fan. I knew everything. If you wanted to talk to me about something simple, I would probably throw Muse in there somewhere somehow. It was my young adolescent way of coping with the world around me. Over the past, oh, year and a half or so, my love for Muse has been increasingly fading. I won’t list off reasons why the “honeymoon period” ended, just know that by now we have gone our separate ways. That being said, I think I have a really unique point of view from which to give this review. With my shameful knowledge of the band plus my newfound distance, I’ll be able to give a review that is intimately informed but distanced as well. Okay so now that I’ve put the bar up so high, let’s see what I can do…

The experience of waiting is definitely something that needs to be discussed. Yes, I said I don’t really like Muse anymore, but I did wait 10 hours to see them on March 7. Maybe I was looking for a last hurrah to my many-years love affair with the band. It was boring. That can be assumed, but you should know that being there at 8 a.m. does not mean you are in the front of the line. Oh no, I was 13th. One Australian woman named Catherine whom I’ve seen at all of the three Muse shows I’ve been to was first in line and she’d been there since 6. She has attended almost 50 Muse gigs in her lifetime. She’s crazy and I don’t understand how that lifestyle can be lived. The lesson is: Muse fans are crazy dedicated.

Okay so, Dead Sara. Previous to the show I’d heard little about the band, just bits from what I’d looked up and from The Current’s occasional playing of the band’s “hit” track, “Weatherman”. Overall, their music struck me as half country rock and half smoky bar rock. The show started with a slower, sentimental rock tune that pushed hard on the country side of things, and then they switched to a harder rock track. That was kind of the process throughout the short show; slow it down and speed it up. Despite the Musers I talked to earlier in the day about Dead Sara giving them a thumbs up, I didn’t really enjoy the band. For me, it was a little too much show and not enough dough. Most of the time the guitar and bass parts were simplistic and banging, with the only intricacy really coming from Sean Friday on the drums. It is really great to see a female-fronted band in the male-dominated rock world, but that fact alone doesn’t make a show good. Yeah, Emily Armstrong (vox, guitar) and Siouxie Medley (guitar) had boundless energy, but it just didn’t click for me. But hey, make the call for yourself. There were tons of other people around me who thought they were phenomenal.

On to the band that I—now regrettably—waited 12 and a half hours in total to see Muse. The English rock band have been mega hits ever since their Black Holes & Revelations album released in 2006, and even earned a spot to coin the official song for the 2012 Olympics (more on that later). Also you’ll be happy to know that yes, my waiting did pay off. I got barrier for the show. Muse may not seem like that big of a deal in the U.S., but look the world over and you will find rabid Muse fans everywhere. Going into this show, I had no idea what to expect. I hadn’t peeked at a setlist or watched a single interview in over a year, so it was all largely a surprise to me. Like always, Matt Bellamy’s (vox, guitar) fascination with technology doesn’t stop at his tricked-out guitars. The stage was set with tons of video screens, both in an arc behind the band, and in a giant, moving pyramid above them. Please don’t go to a Muse show expecting something simple. The intricate visuals displayed on the screens are half comprised of pieces made by Dan Wise Creatives, and the other half is live video shots of the band, the crowd, and everything else in between.

The show really is something of a visual treat. Matt (quite obviously) takes on the frontman role of the band. He constantly shimmied, stomped, and danced his skinny self around the massive stage. His hyperactive movements are countered by the cool and calm demeanor which Chris Wolstenholme, the bassist and backup vocals, wears on stage. Matt, Chris, and Dom (drums) are all extremely technically talented musicians. Their fast-paced finger work is not just a show, there’s real challenge and drive behind the music they play. Morgan Nicholls I think also deserves a mention. The band’s honorary fourth member, he has been supporting them in live shows for a long time. He does a great job as well supplementing backup keys, guitar, cabasa, or whatever else is needed. He’s actually played in a variety of bands including The Streets and Gorrilaz (ever wonder who Murdoc Niccals was inspired by?). I personally don’t like The 2nd Law, but Muse quite expectedly used it to pull a lot of their show literature. “Madness,” “Isolated System,” “Supremacy,” “Panic Station,” “Follow Me,” “Animals,” “Survival,” “Liquid State,” and “Unsustainable” all made appearances during the set. On this newest album, Wolstenholme—for the first time—took the role of lead vocals on a few songs. It was really interesting for me to see Chris in the spotlight, as he evokes a lot more powerful and booming presence as opposed to Bellamy’s erratic and jumpy one. During “Undisclosed Desires”, Matt decided to take a little trip out on to the barrier in order to shake a few frantic, quivering hands. And you guys, guess what??? MATT BELLAMY LIKE TOTALLY TOUCHED MY HAND. I’LL NEVER WASH IT. One friend I was with touched the hand of the Bellamy god and literally was shaking and crying. I’m telling you guys. Muse fans are nuts.

Despite my cooled feelings for the band, I did enjoy myself at the show. It was kind of like momentarily becoming a ninth grader again. Some ridiculous things I couldn’t help but just laugh at: Matt has a pair of sunglasses that read off the lyrics to “Madness” when they play it. During “Uprising,” the giant pyramid lowers over Dom and then shows videos of Dom himself beating up bad guys in black suits with nothing but his drumsticks and spandex suit, and, surprise! When the pyramid lifts again, Dom is actually wearing that red spandex suit. Muse just don’t care if things are camp, bombastic, or over-the-top. One especially cool moment, though not by the band, was during the encore break. Everyone with their flashlight-equipped smart phones (not me) decided to shine ‘em out into the dark stadium, creating a really cool star-like effect. And guess what? “Starlight” was the first song Muse played after the encore. How kawaii. The best part of the show though was when they busted out a rarity from their first album “Sunburn.” Although Showbiz is musically a lot rawer than anything they do now, it’s also a lot more emotionally charged. Now most of the band have kids and solid relationships and are happy, but back then they were dealing with drugs, teenage turmoil, and depression. Maybe not the most enjoyable stuff for some people, but I prefer that sound over the newer one.

This show was closure for me. I realized that my obsessive feelings for Muse were really and truly gone. I don’t need to wait hours and hours to see them again, and I could die happy even if I never end up meeting them. For my new, casual viewer-self, the show was highly enjoyable and a spectacle for sure. My old self has died off. Last time I saw Muse I was depressed for days because it was over. This time, I’m pretty, well, apathetic. Definitely a show worth seeing, but here’s my word of advice: don’t hold musicians on pedestals. It’ll be bad for you, the band, and everyone involved. And then if you ever really meet them, you’re only going to be disappointed or disillusioned.