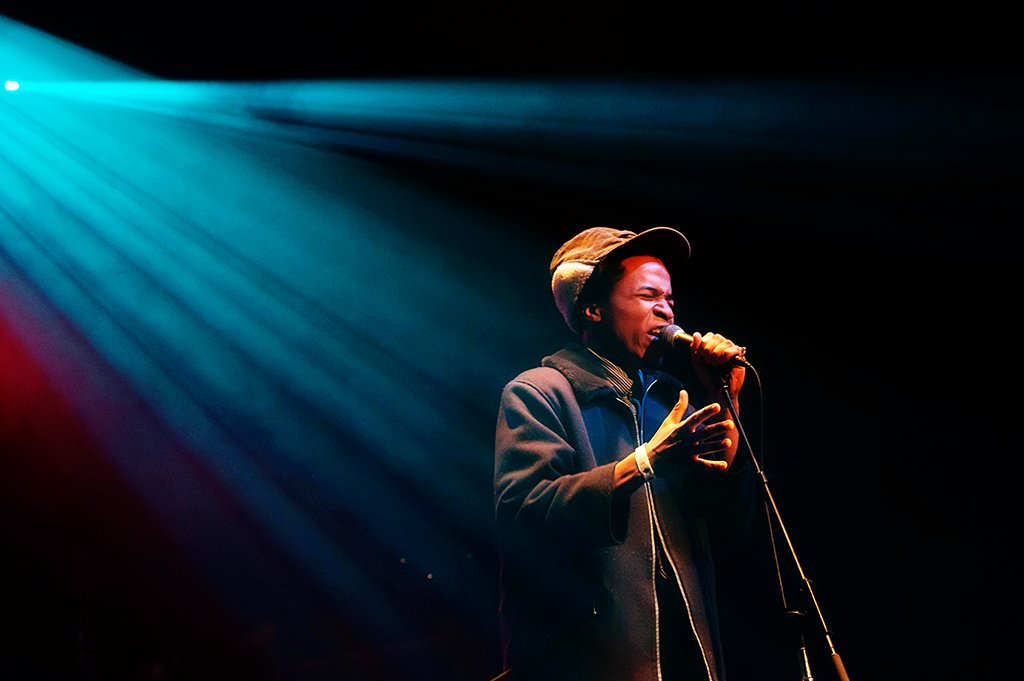 As I was crunching my way through the thick and fresh snow, I was thinking about what it means to be a “best new band.” Fans of indie music, or even local music which is indie by default, often find satisfaction with the discovery of a new band which reaches them in some way. Trite as it the cliche is, there is a something special about spotting an artist in their nascent stage and watching them develop audiences, styles and an identity. Of course, different fans drop out at different stages in this growth; the tolerance for mass popularity and definitions of “selling-out” vary from person to person. Some people think a band has gotten too big when it can play the First Ave mainroom. Some people think a band has gotten too big when they can book a decent size bar show,  basement parties or gallery shows are the trademark of integrity and commitment. I won’t say these people are right or wrong, I mention this to merely put “Best New Bands” in context. Getting on a bill like this implies a certain kind of anointment by musical cognescenti, most of whom do know a good thing when they hear it, but it does put a kind of music industry gloss to the event which in some ways takes the thrill out of seeing new bands. A desired sense of discovery can be missing from the show. Maybe “Best New Bands” is too much of a misnomer, maybe it should be “Picked to Click Redux” or “Bands on the Verge.” Are these bands really new? Anyway, this is all a bit of navel-gazey and yes it is awesome to celebrate some of the more interesting talents that are active in the state. Whatver the name, it does something important for the local arts.

Let me say this before I get too far into the review. I’m going to go out on a limb and be honest. Events conspired to make me miss the bulk of this show. Something I am not happy about. While I could fudge my way through a fake review, that wouldn’t be fair to the artists or anyone who might be reading this. I was really looking forward to seeing Fury Things, maybe it’s my age, but I love it when someone can do noise rock well. I bet their sound could really blossom in the full size sound system of the main room. I was intrigued by BBGUN, their recorded music is a smart combination of rock sounds new and old, kind of a primer in alt-rock and and alt-country all at once. There’s a hipster vibe about them which sounds more vibrant than their brothers-in-management Bon Iver. They may be a new band, but BBGUN looks to be on the cusp of something. Southwire gets my attention everytime they play on The Current, they are something of an enigma, sounding from somewhere else but also evocative of Duluth’s low clouds and Seattle phantoms. I have to wonder how well they’d be received for such a diverse crowd a distance away from Duluth, I don’t mean this as a slight to the band, but they are one of those bands that might be too well-crafted for a general audience. They’re a band you kind of want to listen to, right?

Black Diet is fascinating in their ambition. They’ve got a big, disciplined sound that is steeped in classic soul. Modern updates of canon musical styles don’t always have staying power, sometimes they are too easily shelved as trendy or faddish updates. Black Diet feels too sincere for that to happen, and I would have really liked to see how the live show animated the warm tones of their studio material. Allan Kingdom inverts genre in a different way. The most interesting hip hop is the music that challenges and escapes the cliched motifs which much of the mainstream practitioners self-parodies. Allan Kingdom brings an experimental, somewhat noisey, approach to the form. There’s way too much casual talk of poetry in hip hop; Allan Kingdom brings poetry back to a style which too often feigns poetics. I wanted to see how this airy approach reverberated throughout First Ave, how the music filled the spaces left abandoned by the ambient drunken chatter. I can only imagine how this was.

I’ve heard Grrrl Party on the radio ( pretty awesome to say that) and was excited to see some of the new energy they are bringing to the hip hop world. The initial onslaught of beats delivered by DJ Shannon Blowtorch got my attention. As Sophia Eris, Manchita, and Lizzo took the stage I was impressed with the instant energy they brought. Nothing about this show was going to be static, and that was awesome. They had the power and were happy to show it. They lost me a bit after that, as I tried to listen to the lyrics as delivered, I felt my enthusiasm cool a bit. The delivery was great, but much of the phrasing was taken stock from the hip hop phrase book. Some people really get with the genre fetishes of posture, slang and callbacks; they leave me cold and disengaged. The power of hip hop is wasted on recycled ideas which are bordering on cliche. Rap and hip hop, at its best, delivers original insights into situations which most people might assume are easy to understand. With the fatigues and the driving beats, you can see Chuck D. and Terminator X hovering over the stage, but at first blush the critical point-of-view of Public Enemy is not quite there yet. Of course, Grrrl Party are not Public Enemy: in some ways they are a response to Public Enemy style machismo. As the set rolled on, the lyrical variety and imagination that I needed to hear emerged in varying rhymes, often times matching the power and passion of the soundscape behind them. I was thrilled and relieved. Grrrl Party are doing their own thing and doing it very well. For my part, I would like them to lose as much of the hip hop conventions as they can and push further ahead with what they’ve really got to say. I know this is a balancing act for a young band, but I would hope the scene would support more creativity and not less.

So, Frankie Teardrop. I didn’t know what to expect from this act, especially after a sizable amount of the crowd left after Grrrl Party. All the press had me prepped to enjoy them, but I remember many of the same things said about The Goondas, a band which did not win me over. Usually the weakest part of a young band is their awkward attempts at clever banter. Frankie’s initial comments, delivered in a classic New York punk mimic, struck me as hopelessly off the mark. Then the guitars started, Frankie exploded and the next half-hour or so was a whirlwind of energy, power and a synthesis of forty or so years of punk, heavy metal and new wave. While some of the riffs sound a little familiar, some of the pleasure is the juxtaposition of these references from one measure to the next. This is a little too thinky, of course, there is something potent and ceiling shaking in what Frankie Teardrop brought to the main room. This was great, this was awesome, and this was exactly what I came there to hear. Certainly the woman who was drumming on my snow boots like they were an ice cream bucket felt the same way. As Frankie delivered more of his schtick throughout the set, I got that it was a weird sort of self-referential joke. Or comment. Or some sort of irony. I don’t know what it was and that’s the problem. Frankie Teardrop’s music is unmistakable and direct. Undercutting this with ambigous neo-art school posturing isn’t doing the band any favors. A persona is essential for front men, but it’s confusing when you try to act two different acts at once.

Then it was time to bundle up, cut through the sidewalk after-party and crunch my way back to the parking ramp. Walking past the shell of Block E, seeing the ghost of Shinder’s, remembering the short walk to Foxfire; this all reminded me of a different kind of new band night. Earlier in time, the amazing thing about going to shows like this in Minneapolis was the discovery that this kind of music could happen here. Now, the scene has matured and in some ways we’ve become a frozen kind of Nashville. There’s a self-awareness that was missing before, the environment is very different; but the charged energy of something undeniably “happening” is the same as it ever was. Here’s to 2014.