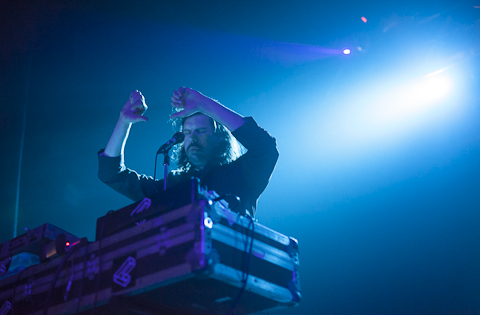 Toward the end of May I stumbled across an article from NPR stating that their newest album WIXIW was “possibly the best Radiohead album since Kid A.” As playfully prodding as that statement is, after giving the album a couple listens it’s tough to disagree with the sentiment. Although genre-less, I was shocked to see this being written about the Liars.

As contingent of their faithful fans filed into First Avenue’s main room on July 17th I was curious what the make up of the crowd was going to be. Would be diehards that are fans of the bands noisier post-punk sound from their early albums or would it be a new listeners inspired to come because of WIXIW ambient electronics? How would the band meld their genre-crossing sounds into a cohesive set?

From the opening ambient synth chords mixed with bubbling claps of the opener “The Exact Colour of Doubt” it had the feeling of a moody set. Lead singer Angus Andrew almost sighing through the opening lines “I wonder / I wonder where you go.” The trio taking the stage dressed in black and white suits only added to moody feeling.

The set continued to pulse along bleeding into “Ill Valley Prodigies” another song off WIXIW. The song ended with a blood-curdling scream from Angus that launched the set into a frenetic blend of tribal beats and dissonant broken chords. The show really began to take shape once they expanded into their older albums.

I don’t know if it was just First Ave’s new beefed-up sound system or Liars thrashing noise rock but it was almost uncomfortably loud. The performance reaching decibels that made me think that I need to start bringing earplugs to concerts.

As the set opened up into a collection of older songs, namely “Holding Hands and It Will Happen Anyway” I felt a sense of nostalgia for the mid 2000’s post punk scene. Multi-instrumentalist Aaron Hemphill on the guitar, standing with his back to turned to the audience in front of his amp, creating ear splitting squeals of feedback and molding the squeals around raucous guitars riffs to create a head banger of a melody reminiscent of the Yeah Yeah Yeahs. At times the performance was dancy at other times just unbelievably loud and rocking, which is pretty much how I want to feel at every concert.

Yet I was impressed with how easily they were able to smooth the edges of their performance and dive back into the atmospheric electronic songs off of the newest album. The first single off the album “No. 1 Against the Rush” was another stand out of the evening, played with an urgency that bled into the rest of the performance.

Songs are written as a way for musicians to express their struggle of trying to find “something” as an audience we translate those songs and experiences and apply them to our own lives. For a band as expansive and fearless as Liars, insinuating that they keep trying different genres trying to find themselves is a ridiculous statement. After seeing them mesh their entire catalog together live, they are a band that is at its best when they are exploring new boundaries and creating a sound all of their own.