The live hip-hop band Heiruspecs have never shied away from acknowledging their roots at St. Paul Central High School. Now they’re officially paying tribute to their alma mater by founding a new scholarship to provide opportunities for future students involved in the arts to go to college.

“It was very much that we met through this program,” Heiruspecs bassist Sean McPherson told me, referring to Red Freeberg’s Recording Arts program. “We didn’t start after school, we started during school. We owe a lot to that place.”

“I remember looking at and applying for a lot of the scholarships there. They were a lot of names of folks that were long since out of the high school age or corporate names. And I was like, ‘It would be so cool to have a Heiruspecs scholarship.’ It’s loyalty to the high school, the desire to do something that would make a lasting impact.”

The scholarship is for an arts student to attend an accredited university. For McPherson, “the ideal scholarship recipient would be somebody who had really gotten some career experience under their belt at Central, because that’s what Central taught us.” McPherson points to the number of practicing professionals who teach students the value of practical, real-world experience as part of their training. “The sooner you can start building your career while you still don’t have to pay rent,” he says, “the better.”

The initial money for the scholarship will come from a concert this coming Thursday, February 25, which will feature Heiruspecs and a few of their closest musical friends and collaborators. This includes many Central alums (Martin Devaney, Lucy Michelle, Aaron Rice, Mastermind of Guardians of Balance, Booka B, Mayda, and the Abstract Pack), as well as artists who support the cause despite having attended high school elsewhere (Sims of Doomtree, Desdamona, Carnage, Kristoff Krane, Adam Levy, and Eric Blair of No Bird Sing). The night will even feature an appearance from St. Paul mayor Chris Coleman (Cretin ’79). 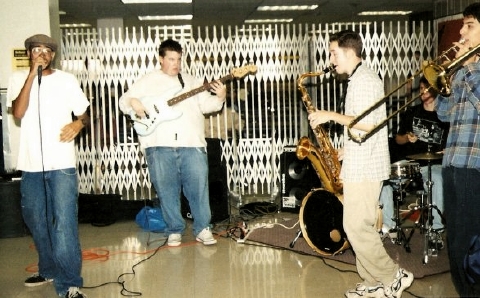 Many of the performers share similar memories from their days at Central, as well as the importance of the scholarship. For Mayda, she “got to develop my own sense of direction towards the music I wanted to make as an artist. I have gained so much from Central not only as a musician, but as a citizen, a young adult in this community.”

Lucy Michelle feels much the same way. “The music program helped me learn to perform, how to be comfortable on stage,” she says. “I want other kids to get what I got out of the program, or at least for them to figure out a way to apply all the wonderful teachings and experiences they were lucky enough to receive at Central.”

For Martin Devaney, who has known many of the Heiruspecs crew since the beginning, “it’s great to be able to give something back to the school through music. But I think it’s also a great gathering of musicians who can come back to the school and show a younger generation what we’ve done over the years and hopefully inspire them to continue their interest in the arts.”

In addition to the packed bill, one of the highlights of Thursday’s show will be the conclusion of Heiruspecs’ 90-minute set, a massive freestyle session with all of the MCs who perform over the course of the night participating. It will feature hip-hop beats recreated live by Heiruspecs for MCs to rap over. While the band has done this through most of the career, they have a “no-repeat” rule that forces them, on this occasion, to dig a little deeper into hip-hop’s past. “We’re mining basically the last 10 years of hip-hop history, maybe even the last 20 years of hip-hop history,” said McPherson.

Ending on a note of looking backwards to move forwards, the concert on Thursday night is just the first step to what McPherson hopes will be many years of support for deserving students. “Ultimately,” McPherson says, “this thing will work longer than the band itself.”