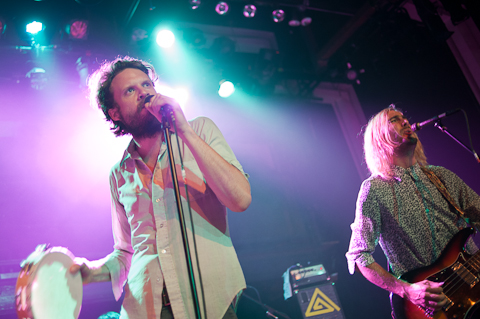 Father John Misty started his show last week trying to explain a Twitter comment and photo chronicling his previous wild night in Chicago and apologizing for not really knowing if we were really all there or merely a figment of his imagination. He swept back his curls, sauntered across the stage and launched into “Funtimes in Babylon.”

“I would like to abuse my lungs/smoke everything in sight with every girl I’ve ever loved and ride around the wreckage on a horse knee deep in blood. Lookout Hollywood, here I come.”

It’s true that he did not write Fleet Foxes’ “Helplessness Blues,” but with each verse from his new solo album, I began to wonder just what he might have been dreaming about in the back of their tour bus last year.

His creative arc from the four part harmony, love and peace vibe of the Crosby, Stills, Nash and Young inspired music of Fleet Foxes to the darker William S Burroughs tinged lyrics of “I’m Writing a Novel” has got me mesmerized:

“I ran down the road, pants down to my knees screaming, please come help me, that Canadian shaman gave a little too much to me!”

He may have played through the whole album during the concert on July 15 at the Varsity Theater (I was only familiar with three songs at the time) but his set was over too quickly. He rocked hard on his most well known tune, “Hollywood Forever Cemetery Sings.” Strobe lights, rippin’  guitar solo and at one point I couldn’t see all of him but I think he was writhing around on the stage. Apparently he used up all his energy by then and did not have it in him for an encore. He apologized and waved goodnight. He was the second opening act for a group I was unfamiliar with called Youth Lagoon.  My trusty concert companion (daughter) and I decided to stay for the headliner, watch the crowd, talk about electronic drone music and frat bros, and wait for the merch guy to return to the table so we could buy a copy of “Fear Fun.”

I am curious about J. Tillman’s journey and wonder what direction he will take his music and writing next. The mom in me wants to make sure he’ll be alright after he travels down this darker road.

I’m looking forward to next July.