Joel Zimmerman, who is better known as Deadmau5 (pronounced dead mouse), is arguably the most popular actively touring electronic dance music act in the world right now. His popularity has skyrocketed over the past few years behind headlining slots at festivals like Coachella, as well as a recent gig as the house DJ for MTV’s Video Music Awards. Of course both of those pale in comparison to the Snooki factor; the Jersey Shore “star” is a big fan. Still, despite Deadmau5’s recent success, I was surprised that his Wednesday night show presented by Sound in Motion at Epic sold out in advance and that people were offering $75-100 for a ticket after it sold out.

I arrived at Epic in time to catch some of Deadmau5’s tour opener, Skrillex. As a friend pointed out, he looked sort of like a more hip Tommy Wiseau (creator and lead actor of the cult classic movie The Room). He played a very energetic and entertaining opening dubstep-heavy opening set. Personally I’m not much of a fan of dubstep (I prefer the dad-based genre, dadstep, to be honest), but the songs he was playing were good even to a Scrooge like me. It was a funny sight to see him on stage, as Deadmau5’s elaborate set up took up most of the stage and was covered with a tarp, leaving Skrillex pushed off to the right and barely visible.

The place was beyond packed. I have seen plenty of shows at this venue, as both Epic and its earlier incarnation Quest, and none of them were anywhere near as crowded as this show. There were hordes of people in each direction no matter where I went. The venue’s website claims the capacity is 2,400. According to a tweet from the Mau5 himself, the capacity was 3,000 and there were 3,600 people there. Regardless of what the capacity actually is, the audience certainly exceeded it, and a thick line of people waiting outside in hopes that the venue would release more tickets ran clear to the end of the block. It was very hard to get around inside—at one point it took me about five minutes just to get down a staircase, and it was hot and uncomfortable. It got to the point that the star, via Twitter, urged everyone to tone it down a little and stay safe.

The crowd was an interesting mix of people. There were the hardcore Deadmou5 fans, with homemade mouse helmets—some with elaborate illumination systems—much in evidence. There were plenty of people confirming that the Snooki factor was alive and well, wearing short skirts, Ed Hardy shirts, and sunglasses. There were also plenty of ravers with even shorter skirts, furry boots and hats, and of course their glowing hula hoops. There were also a lot of “normal” looking people who didn’t fit into either of these two categories. I ran into a few acquaintances whom I never would have imagined would have been fans. I was very impressed by Deadmau5’s drawing power, and as a big fan of electronic dance music, this show gave me hope that the future of the genre is as bright as ever.

That said, whenever a crowd is that big, there are bound to be some problems. I saw three people getting escorted out by security just while I was waiting in line to get in, and saw a few more getting booted once I was inside. Some people on the VIP balcony near the right side of the stage were throwing things on to Deadmau5’s gear. Eventually he looked up at them and gave them the international hand signal for “WTF, bro?” Also, as it was an electronic dance music concert, many audience members were certainly under the influence of controlled substances; I encountered a few audience members who had gone a bit too hard. I didn’t have the heart to break it to the kid next to me with X’s on his hands that the cell phone video he was shooting of himself holding a glow stick wouldn’t look as cool when the stuff he was on wore off.

The curtains were removed from Deadmau5’s stage set up, which looked like a giant space pod in the shape of an inverted pyramid, and the DJ popped up shortly after midnight wearing his trademark mouse helmet. The structure he was standing on was essentially a giant video board, and every inch of it was used during the show. The visuals started out very minimal, but by the end of the show his entire structure as well as a few panels on the wall behind Deadmau5 were completely illuminated with visuals that were perfectly synced with the music. At one point, words appeared on the structure informing the audience that Deadmau5 had died but that they could rebuild him, and that he would be “way moar better” when he returned. This was not a lie, as he switched out his mouse helmet for a new one that had LED lights in it, adding another digital canvas that sometimes went along with the visuals on his structure and at other times displayed a smiley face that would sing along with the songs he played. This was the best part of the show and very fun to watch. His stage set up can’t match the ridiculously high bar set by Daft Punk, but he’s not far behind.

Unlike the light show, the music left something to be desired. I’ll probably be deadm3at for saying this, but I’ve never been a huge fan of Deadmau5 as a music act. I saw him once before at an electronic music festival in Los Angeles, and he could not keep up with the other acts such as Basement Jaxx and Justice. I certainly enjoyed his music much more this time around, but I think that’s because there was no one around to upstage him. Peaks and valleys in tempo are a very important part of electronic dance music, and I think Deadmau5 spent a few too many days in the valley. I’ve always been more of a peaker myself. What can I say, that’s just the way I was raised: my mother was a peaker, and my father was a peaker, too. Obviously my tastes are not commonly held based on the size of the audience, and the crowd seemed to be loving every minute of the show.

Zimmerman was very playful and entertaining throughout the show as his alter ego Deadmau5, constantly whipping the crowd into a frenzy with well-timed arm movements. He wore his mouse helmet for almost the entire show, taking it off for a minute at about the one-hour mark to finally take a drink, and then again for the last few songs of his 100+ minute set. At about 1:45 AM he left the stage and then came back dressed as a ghost and proceeded to play several dubstep songs in a row. I guess this was his way of saying it was time to go home, and it also provided further evidence to support my theory that the undead love wobbly bass lines.

All in all, despite the fact that the music was not up my alley, I still had a great time and left the venue very impressed. Even if electronic dance music is not your thing, Deadmau5 is certainly worth checking out for the mind-blowing visuals alone, not to mention the prime people watching opportunities—even if Snooki isn’t there. 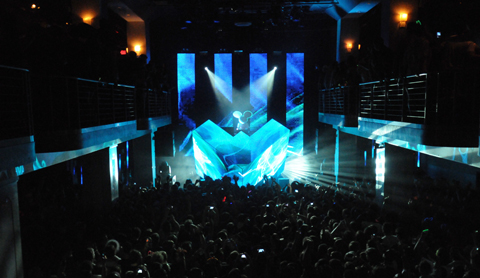 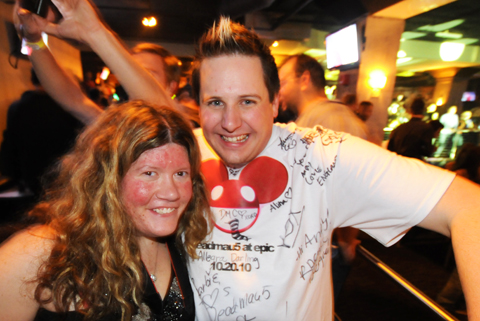 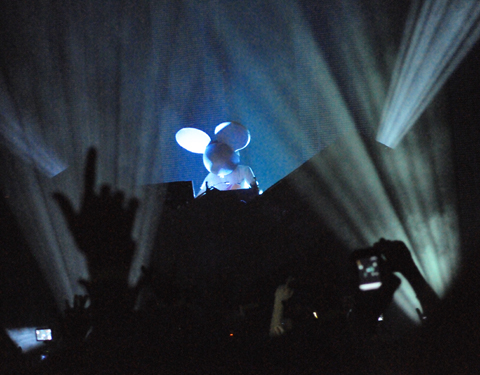 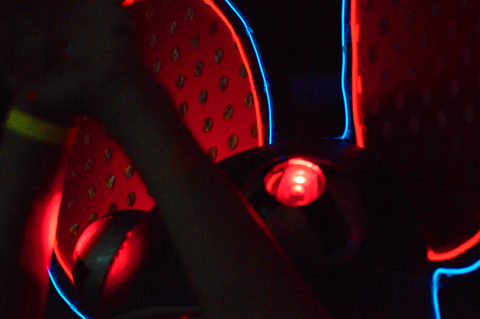 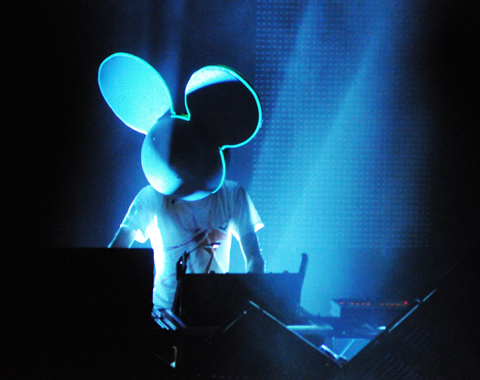 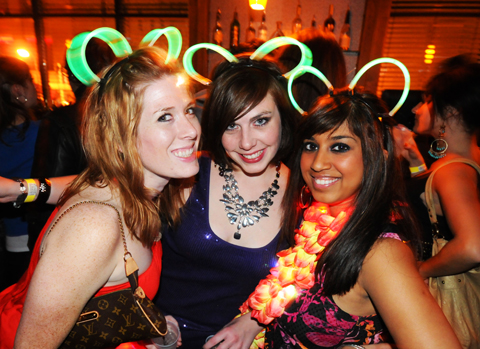 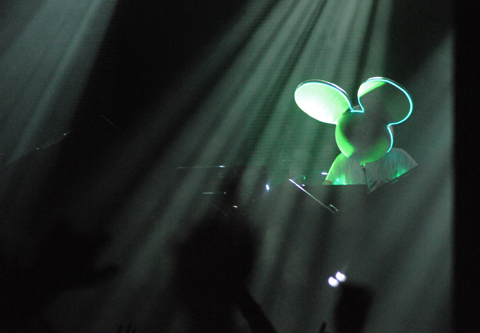 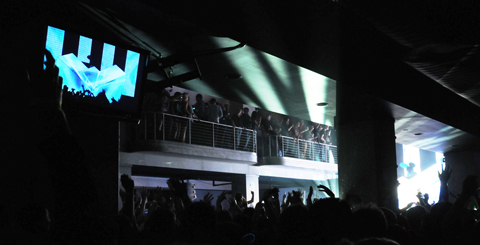 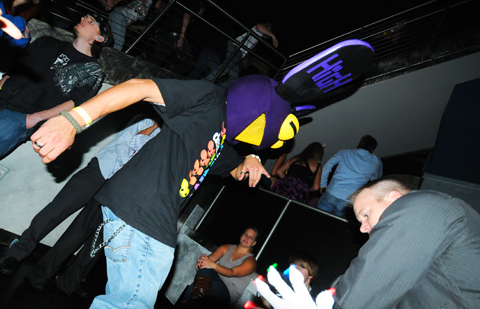 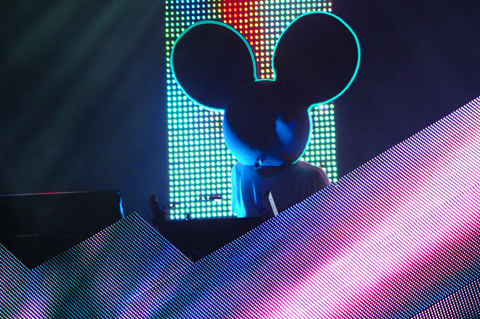 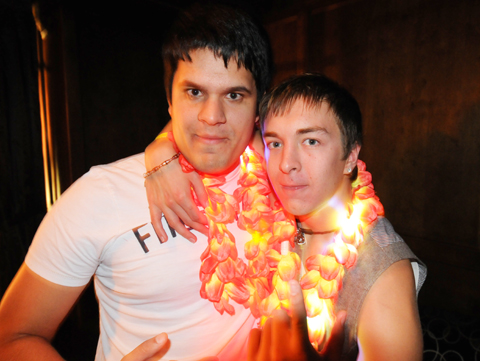 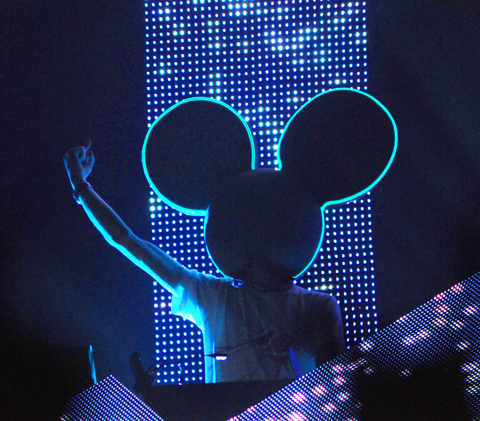 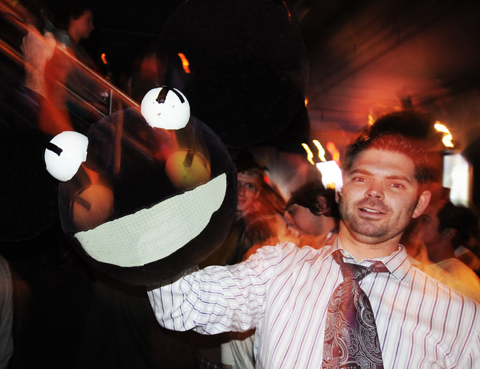 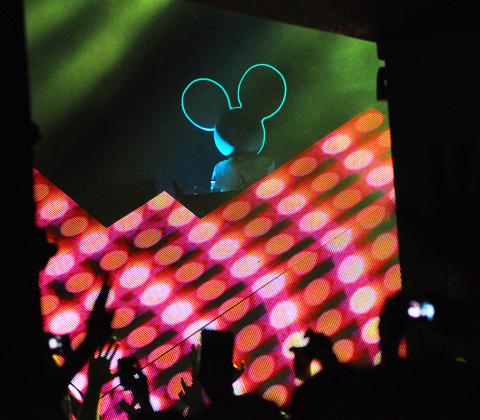 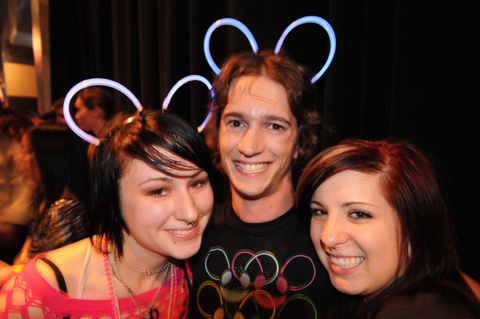 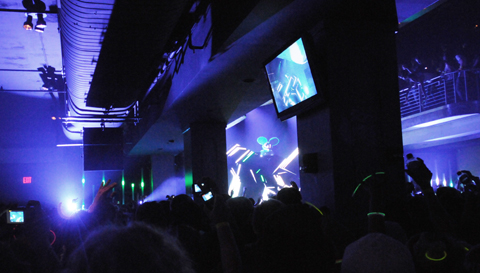 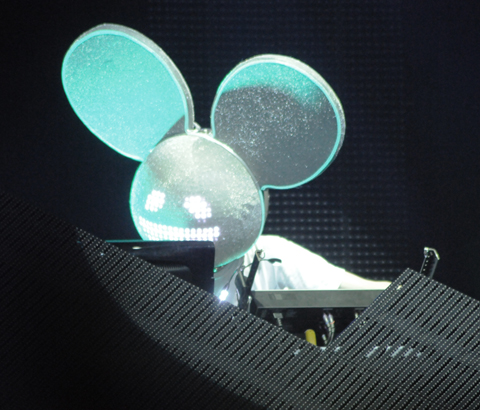 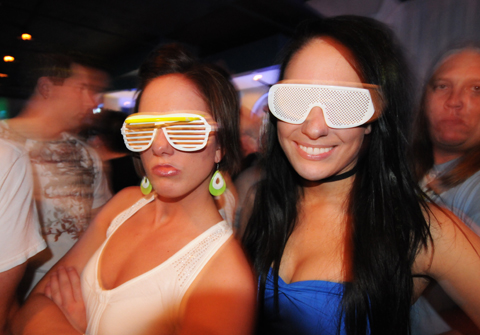 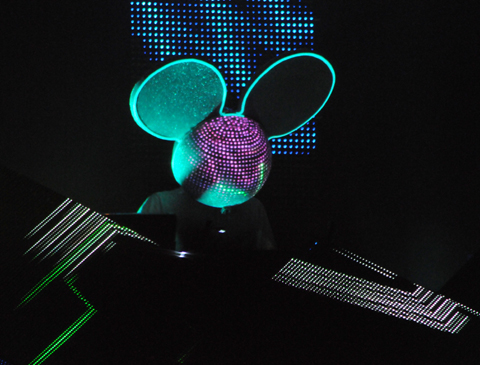 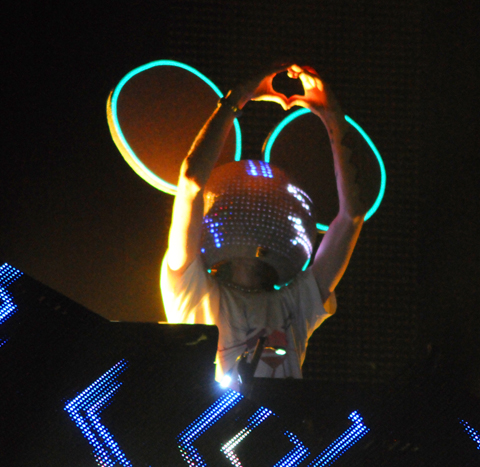 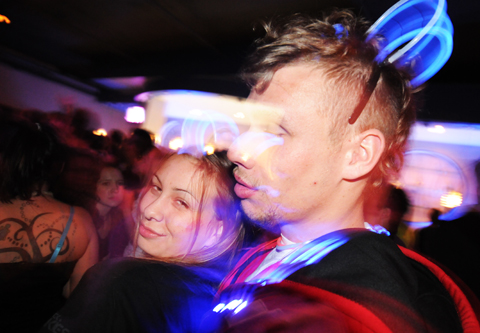 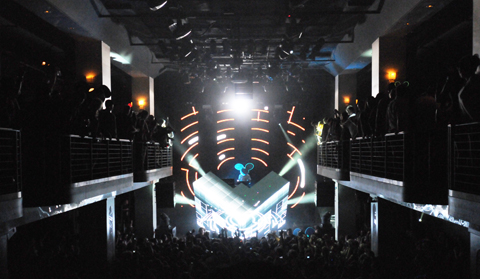 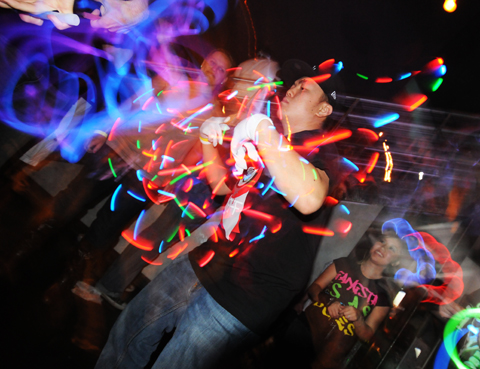 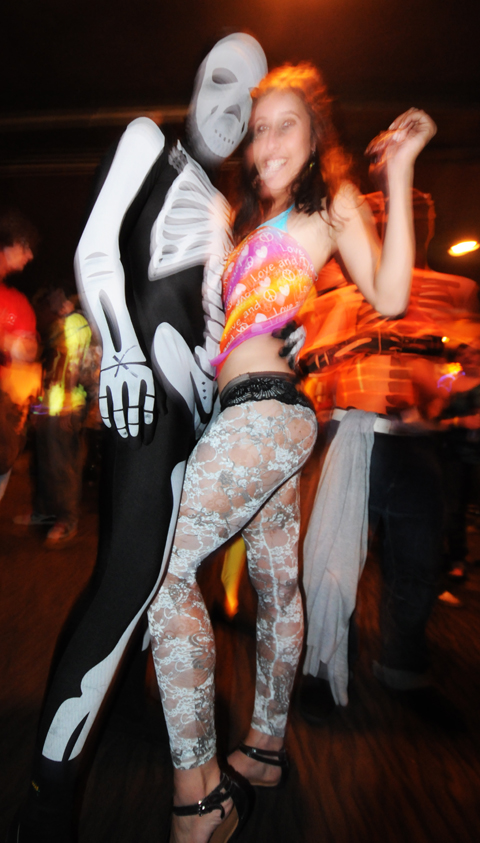 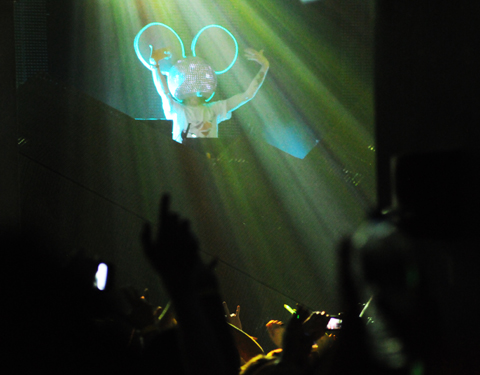 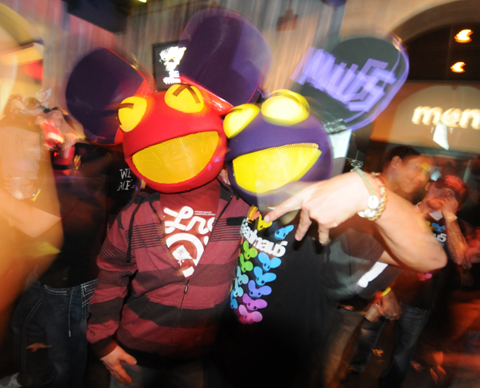 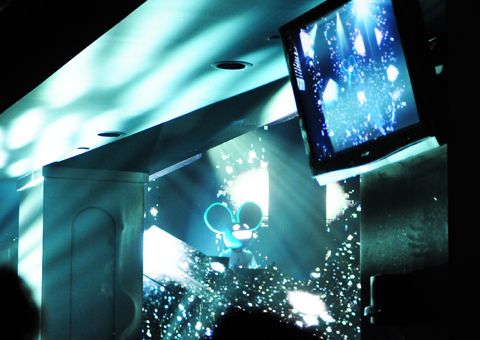 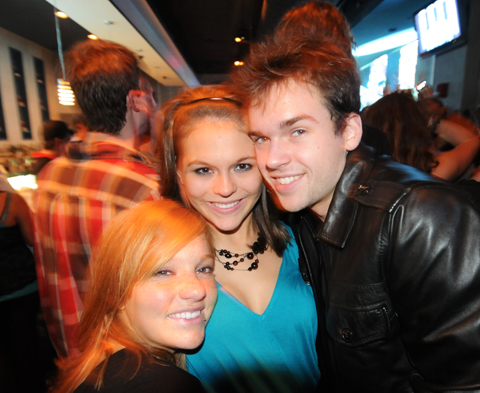 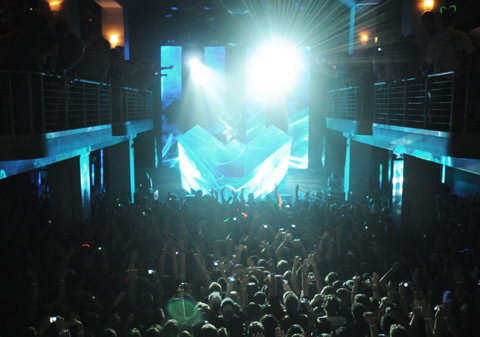 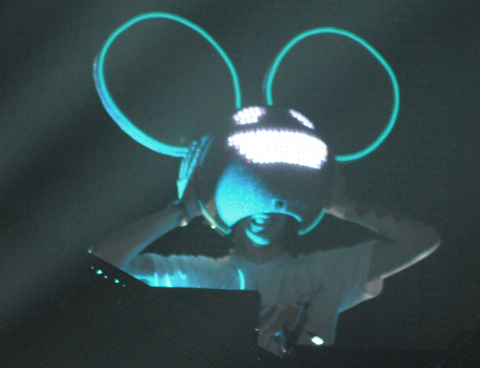