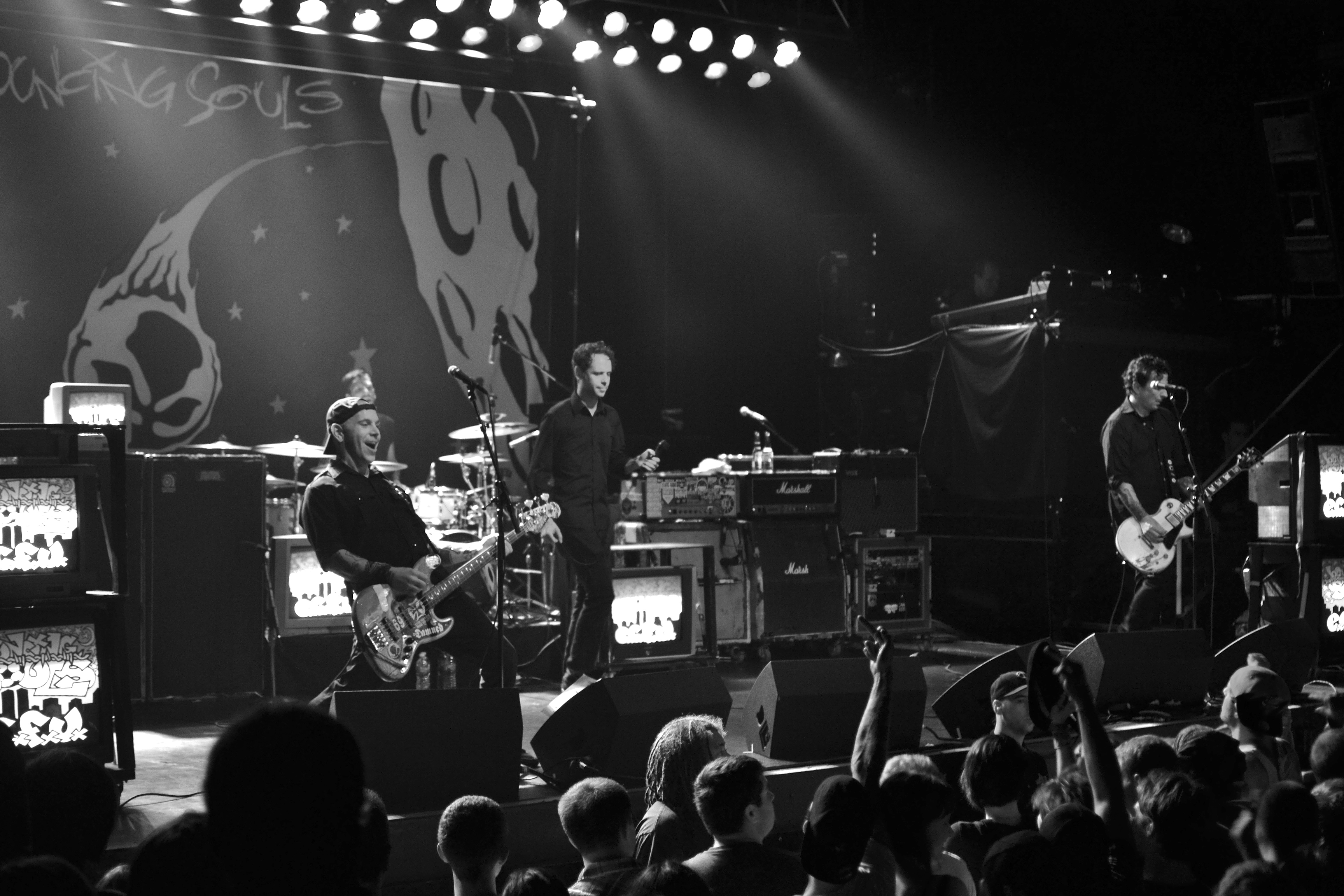 For 25 years The Bouncing Souls’ sound has exemplified energy and a celebratory spirit in punk rock. See: “East Side Mags.” It’s music for those with spring in their step or whatever joie de vivre is called in their native New Brunswick, New Jersey. It’s a long time to keep it up, especially when many of their punk peers have slowed or stopped altogether. But the circle pit in First Avenue’s main room on July 28 betrayed very little about The Bouncing Souls’ age.

Through fan favorites like “Cracked,” “East Coast! Fuck You!” and “Argyle,” the center of the crowd turned cyclonic and churned counter-clockwise as those leaning against the railings and stairs sang on. Certainly, it helped that the show was 18+, but I recognized a few veterans of the scene, noticeably sweatier and hairier, dancing with the kids. But most of those old enough to drink—the ones who stayed on the 21+ second floor through openers Luther, the Menzingers, and the Smoking Popes and drank beer—came down for The Bouncing Souls, but watched from the back or sides, perhaps thinking themselves a little older and wiser than to be slamming bodies.

On stage, singer Greg Attonito has never been one for grand theatrics or much movement for that matter, instead relying on a distinct voice. It vibrates at one of those frequencies that, no matter the guitars’ gain or cymbals crashing, cuts through like some fixie lunatic barreling into a Brooklyn intersection. It’s been that voice and loud guitars with which The Bouncing Souls have built a career writing songs from the fast lane—love (“Hopeless Romantic”), tours (“Here We Go!”), and drinking (if you haven’t clicked through the “East Side Mags” link, pause and do so now). At First Avenue Attonito and the other Bouncing Souls ripped through 25 songs with the tightness of a studio record. They made it look effortless.

But often in rock it’s the visual effort—the dripping sweat and bulging tendons of a band barely holding the hurtling rig together—that makes the show memorable. I’ve noted that hallmark in other reviews, but if I commented as such to the guy on the balcony in a dress shirt and khakis who’d seemingly just got off work or the woman beside the pit wearing the silver maxi or the large man with the upturned bill swinging arms in the pit, I think they would have looked at me with disdain.

The reflection on my computer screen is doing something similar.

My first Bouncing Souls record was their live EP Tie One On! My brother and I listened to it over and over because like their show at First Avenue, the album sounded like a celebration. We weren’t drinking yet or heading out on long road trips or falling in love, but the feelings coming through our parents’ stereo were familiar and unmistakable. Sure, my brother and I were young, but for all us fans at First Avenue nearly or already through our twenties, The Bouncing Souls again brought out that energy from somewhere in our overworked and flabbier chests. It might have looked differently than it once did, but it’s still there. And it’s still the best of feelings.