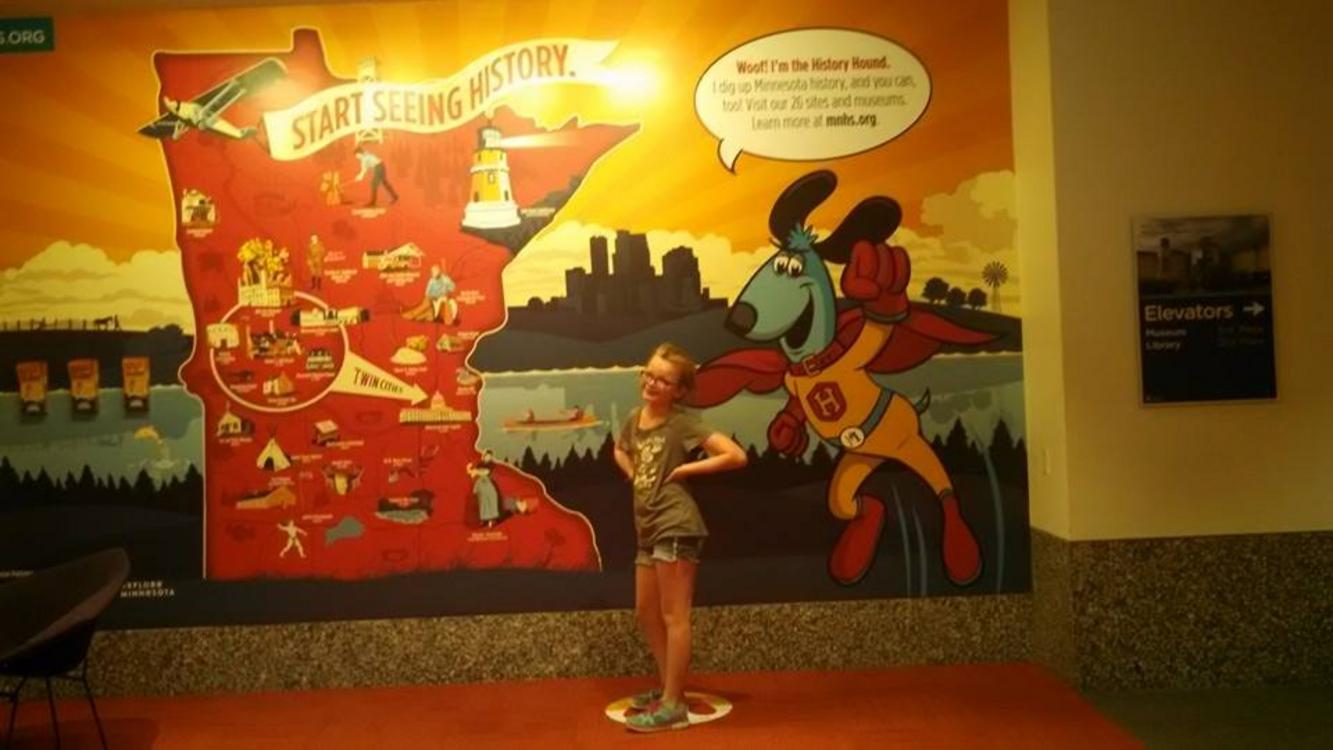 Saturday, September 27 was Museum Day, or at least according to Smithsonian Magazine it was. Five museums in the Twin Cities participated; we visited four. The fun part was that they were museums that we don’t visit often – two were entirely new to me. Celebrating Museum Day really just means you can get access to free tickets but it’s also a good excuse to get out.

Stop number one was the American Swedish Institute; this was one of the new-to-me museums. The best part of museum is FIKA, the restaurant. I would go there again in a heartbeat. We had several small plates of fancy foods, including pork belly, rock shrimp and meatballs. The desserts were pretty good too. The museum itself is an old mansion so part of the art is the architecture and interior decorations (which are amazing!) and part is rotating exhibits.

The architecture is wooden and clean lines. The chandeliers and fireplaces are the outliers being ornate and gorgeous with surprising color and fringe. The top floor is like a child’s playroom in an attic – in other words just like the setting for Flower in the Attic but not as creepy.

We enjoyed the show of Finnish rungs and their makers but it was the Love Norway exhibit that really struck me; especially a work by Ian Ward Garlant called The Construction of Love. It was very modern with an industrial feel backed up with disco-like music. Fun to see the modern art in the old mansion – although the Swedish lines are so clean that there always seems to be a modern feel, no matter how old the work is.

One odd fact from the exhibit – the first recorded Swedish resident of Minnesota (or land that would later be called Minnesota) was Jacon Fahlstorm in 1819. He married an African-Annishinaabe woman named Marguerite Bonga. A nice reminder that Minnesota has a history of embracing diversity.

Stop number two was the Minnesota Center for Book Arts. The MCBA offers some great classes. In fact, I think we’re inspired to visit again when they have one of their Friday night taster specials. As it was described to me, you pay a little bit, try a lot of things and go home with something you made. Fun!

The MCBA is not really a stop and peruse sort of library but we had fun poking around. The building itself, especially the basement, is worth the trip. We were also allowed to wander through the printing presses and even better yet the letter blocks. There must be thousands of tiny letters. I am awed by the people who take the time to handcraft works of words!

Stop number three was Gibbs Farm; this was another new stop for me. Apparently I am the only graduate of a Twin Cities grade school that did not take a field trip to Gibbs Farm.

The farm is the homestead of Jane DeBow and Herman Gibbs who moved there in 1849. You can visit a replica of their original sod home and their serious upgraded second home, which is he much larger cabin.

The farm has animals, a small apple orchard and a number of Dakota artifacts from a Dakota style teepee (tipi) to a medicine garden. It’s a great place to spend a sunny Saturday. To be fair, it’s probably more interesting for kids younger than 10 and my date was exactly 10 years old. That being said she really enjoyed exploring the different areas of the farm and trying to get the animals to pose with her.

Our final stop was the History Center. I forget just how good the History Center is as an interactive interpretive center. Their permanent collection includes a recreated house that showcases more than 100 years of inhabitants in a way that both personalizes and broadens the experience of welcoming immigrants to the community and watching them move on to make space for the next wave.

One of the best parts of the permanent colelction in the cornerstone of the Weather Permitting section. It’s a reenactment of a tornado touchdown from 1965. You sit in the “basement” listenting to WCCO as they report what’s happening through the voices of the survivors of the tornado. It’s scary and moving. They do a wonderful job evoking feelings through touchstones and elegantly simple special effects.

We also visited the Toys exhibit. I spent my time trying to explain to my 10 year old date how Cootie could be a fun game. I sang the commercials as they appeared on the TV and totally beat her in a quiz about toys produced years before she was born. (But I’ll take a win where I can get it!) One odd and interesting fact – Barrel of Monkeys was developed in Minneapolis originally as a promotional gimmick for Anheuser-Busch Brewery. (Making drinking beer while playing makes Barrel of Moneys more fun!)

I won’t pretend like there were long lines, t-shirts or balloons out for Museum Day, but again we enjoyed the excuse to go to new places and appreciated the opportunity to do it for free. Maybe when the snow falls we’ll return to spend more time at our favorite new museums. I’ll definitely be adding FIKA to my lunch place rotation.