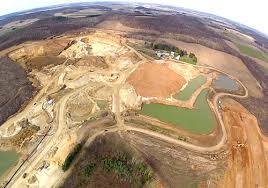 The Rochester Post Bulletin reports in Dayton not ready to impose statewide ban on silica sand mining that the governor isn’t siding with citizen demands for a one-year moratorium while a statewide Generic Environmental Impact Statement (GEIS) is conducted.

Instead, he murmurs sweet sentiments about grassroots citizen opposition to the mammoth St. Charles project. Rural Minnesotans are so cute when we’re mad.

FL Gov. Mark Dayton said Tuesday he does not support a statewide moratorium on silica sand mining at this time but does back tougher regulations.

“If the industry starts to spiral out of control, then I wouldn’t hesitate to call for a moratorium. But I don’t think we’ve reached that point,” he said.

The governor also praised St. Charles officials for their recent decision not to move ahead with a silica-sand processing and transportation project.

“The actions the citizens of St. Charles took are really courageous and compelling,” he said, “and it says to the Legislature that there are a lot of people in that area affected by this who are very concerned.”

Courageous, compelling–and not on the legislative priority lists of most of the state’s NGO environmental groups, regardless of how many people mobilize regionally on this issue. That should help out the industry dismiss those grassroots citizens’ concerns.

Perhaps Dayton could signal which “tougher regulations” he wants–after all, he was able to write a new sand tax into his budget.

Meanwhile, the industrial sand corporations were crying poor mouth at the hearing for the proposed tax. Carlson reports:

The silica sand mining industry is fiercely opposed to a moratorium, arguing that companies already spend millions of dollars on required environmental reviews. Mine owners are also upset at the idea of additional taxes. On Tuesday, the House Taxes Committee held a hearing on a bill sponsored by Hansen to impose a $1 per ton tax on the extraction of silica sand. The bill would also allow counties to impose an aggregate tax of up to 30 cents per ton of material and add a tax on the processing of silica sand equal to 3 percent of the sand’s market value. Money raised from the tax would be used to help cover transportation costs related to mining, acquire land to protect environmentally sensitive areas from mining and acquire permanent easements to protect drinking water.

. . . House Taxes Committee member Greg Davids, R-Preston, said this level of taxation would serve as a de facto moratorium by “pricing folks out of the market.”

Hansen emphasized that the bill is not aimed at stopping silica sand mining in the state. Instead, it is geared towards protecting residents.

“I don’t want to have something happen where we have a mine and all of a sudden we have a town that has run out of drinking water because we have impacted the wellhead drinking area,” he said.

Hansen’s not aiming for a stealth moratorium–and he doesn’t support a statewide GEIS. We’d talked one-on-one about the issue last November at the Minnesota Farmers Union convention, and he’d shared the concepts that have worked their way into his bills.

The bill was laid on the table for future consideration as part of a larger tax bill.

What lesson from Wisconsin and Minnesota rules?

A Minnesota Public Radio report from Elizabeth Dunbar, How Minnesota and Wisconsin’s frac sand mining rules differ, is likely to be cited by pro-Walker and pro-industry sources as proof that we need to leave this poor little profitable industry alone, but the details suggest that the concerns of the courageous peasants of St. Charles are well-grounded:

Reclamation: Reclamation is the plan a mining company makes with the government to shut down the mine and reclaim the land for another use. Wisconsin state law requires all mining companies to have a plan ahead of time and to provide financial assurance in case the company goes belly up. Minnesota has no state law requiring reclamation plans, but many local governments require it.

State Resources: Wisconsin’s Department of Natural Resources has had a designated point-person for frac sand mining since August 2011. Sand mining companies can field questions and permit requests through that staff person. Minnesota has no designated sand mining staff, and companies must fulfill permit requirements through two different state agencies: the Minnesota Department of Natural Resources and the Minnesota Pollution Control Agency.

Inspections: Neither state has designated inspectors to monitor the silica sand mining industry. State inspections of air, water and other permits are done periodically across industries.

Reclamation, state resources and inspection are issues citizens have raised locally and at the state capitol–while mining companies push the notion that they can monitor themselves.

Dunbar notes that the two states have much different use levels for triggering a water use permit:

Water Appropriation: Silica sand processing uses a lot of water. Mines in both states must have water appropriation permits if they plan on pumping more than a certain number of gallons. The volume of water that triggers the permit requirement is different in each state: Minnesota requires the permit for pumping more than 10,000 gallons/day, and Wisconsin requires it for pumping 70 gallons/minute. (If you pump water at 70 gallons/minute over a 24-hour period it calculates out to about 100,800 gallons.

Readers are left to connect another dot on their own with that one. Minnesota’s water use has been much in the news of late–and those water permit inspections frequently show that users exceed permit levels.

At a time when drought threatens state water supplies, scores of water permit holders in Minnesota are illegally using billions of gallons more water then they’re entitled to.

Over the last six years, hundreds of individuals, businesses and even state government agencies have pumped more than their permit allows, according to state Department of Natural Resources records. But violators face few consequences for these misdemeanor violations. Even in a two-year drought, DNR officials admit they don’t spend much time enforcing permit limits.

Steil points out that the DNR’s resources are focused on processing new permits and discovering unpermited wells, rather than enforcement.

In the world of bureaucracy, inspection and enforcement are two different creatures, and so a cautionary lesson emerges from recent coverage of the industry in Wisconsin, Frac sand industry faces DNR violations, warnings.

Usually, [Air Program officer Marty] Sellers said, the DNR expects 90 percent of companies in a regulated industry to comply with rules on their own. But in his visits to a dozen frac sand facilities, Sellers encountered the opposite pattern, and he sent letters of noncompliance to 80 to 90 percent of the sites.

DNR compliance officials acknowledged they have been stretched thin monitoring the sand industry, which has grown from a handful of sites five years ago to more than 100 permitted mining, processing or transport facilities today.

. . . Gov. Scott Walker has proposed two new DNR positions in his budget to monitor the sand industry, by shifting $223,000 from other parts of the budget.

Bluestem was pretty curious about that anecdote and we’ve put in a public documents request for Sellers’ letters of noncompliance. In talking to Sellers and his supervisors, we’ve learned that since the state of Wisconsin assigns Air Program staff by region rather than industry–and all of the frac industry is in Sellers’ region, he’s the only staffer visiting the industry.

The two new positions will help with permitting and compliance–while (if we read Walker’s budget correctly) the “other parts of the budget” seem to two enforcement positions.

As the lackadaisical enforcement of the state’s water permits suggest, Minnesota must think through not only permitting and compliance issues, but enforcement as well. Hansen’s silica tax provides for funding to repair roads and to fund preventative measures to protect wellheads and acquire sensitive natural areas.

All are laudable goals–and given the return on this industry (all poor mouthing aside), it’s not unreasonable to ask an extractive industry to pay for the consequences of its activity. What the silica sand tax bill doesn’t fund are inspections and enforcement.

Photo: Aerial view of a Wisconsin silica sand mine. (Photo by Jim Tittle; used with permission)