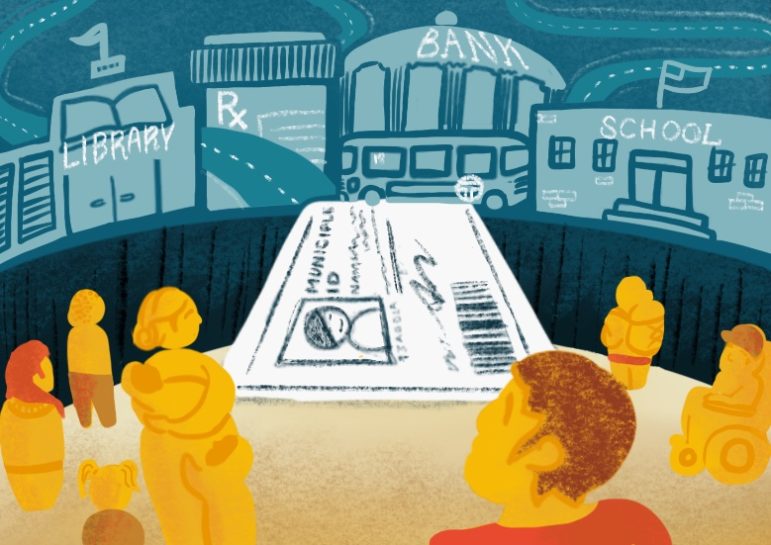 Municipal identification is not a nascent thing, but rather a local, albeit legal identification that’s taken hold in large and small cities across the country, from Los Angeles to New York City and even to Northfield, Minnesota.

On just a single page on the city of Minneapolis’ website, municipal IDs have certainly become part of the political lexicon, after nearly a decade of grassroots advocacy. The page begins with the declaration that, in order to show we are “One Minneapolis,” municipal IDs will “further advance the City’s racial equity goals.” The IDs, the page explains, “will connect Minneapolis residents to services, programs and benefits, regardless of immigration status, homelessness or gender identity.”

That the use of IDs now stand to be codified into law comes on the heels of years of hard work by a broad coalition of immigrant activist groups and community organizations collaborating with the city’s Neighborhood and Community Relations. This coalition includes the Minnesota Immigrant Rights Action Committee, Minnesota Immigrant Movement, Jewish Community Action, labor unions, faith organizations and community organizations. Erika Zurawski, a volunteer activist with the Minnesota Immigrant Rights Action Committee, who is familiar with the relevant legal issues, said that the broad support for the measure had been in the making for many years, related to the work to position Minneapolis as a sanctuary city,“[We have] just been pulling out those same forces that are already working with us … and [they] have been supportive.”

Municipal IDs – and why they matter
According to the American Immigration Council, there were 100,000 people without documentation in Minnesota in 2014, about 1.9 percent of the total state population. For this already vulnerable population, not having any form of identification poses a great deal of additional problems. Struggles of seeking naturalization, accessing education and the imminence of deportation, these all will become so much more acute.

IDs are the guarantees of secured access to almost everything, to every service. Without an ID, getting a library card, and gaining the accompanying civic benefits, is off the table. Even some food shelves in Minneapolis ask for IDs in order to provide their services. Without an ID, activities such as picking up prescription medication, opening a bank account, or getting a child from school become harder or even virtually impossible.

The founder of Minnesota Immigrant Movement, who asked to remain unnamed, first raised the issue of municipal IDs in 2009, recalled, “When the 35W bridge collapsed, I remembered that many parents went to pick up their kids, including myself, and [school officials] were asking [for ID].” Schools must safeguard the welfare of students, of course. But for sure, this should not come at the cost of having stringent practices of identification and unfairly targeting parents without any form of government-issued ID. All of this crystallizes the need for non-traditional, less inaccessible forms of identification, such as municipal IDs.

In the current form of the Minneapolis ordinance, municipal IDs will be very different from Real IDs. For one, there is no guarantee that IDs will be valid in other cities or regions of the state, although the city of St. Paul has expressed interest in honoring their validity. And there are also no plans for allowing people with municipal IDs to register to vote. How the ordinance will be implemented has certainly become a piecemeal development, a thing yet to be fully determined and seen.

Activists will have to place a lot of trust in the city’s lawmakers and in the “memorandums of understanding,” previously established with businesses and organizations. Campaigns to get agreements for incentives have also already taken place at businesses on Lake Street, the Walker Art Center and more.

Minneapolis, at a crossroads
While things seemed in motion, it might take even longer before municipal IDs come to Minneapolis. A main issue is the budget – to name a few, more money is needed to buy new machines for printing municipal IDs and to pay people to process applications. “We’ve received estimates that the machine alone to print the cards could be up to $150,000, and that a staff person plus benefits could be at $100,000. So it’s one thing to support the municipal ID verbally and it’s another thing to set it up for success,” said Zurawski.

In his first budget proposal as mayor, Jacob Frey allotted $200,000 toward municipal IDs. MIRAC supports doubling that funding, but they need Minneapolis residents behind this move. As of now, there aren’t any city council members that support raising the budget line.

While Minneapolis activists have worked with Northfield’s municipal ID organizers, both parties admit that the challenges for municipal IDs in Minneapolis are different. Northfield’s 2017 municipal program circumvented their budget issue by asking for donations, an option admittedly harder for a larger city like Minneapolis. “The program has been very well received – it was a community effort. People are little by little getting acquainted with the program,” said Mar Valdecantos, chair of the Human Rights Commission and co-chair of Neighbors United. Valdecantos brought municipal IDs to Northfield.

The city implemented the municipal IDs program with relatively little cost, charging $15 for the card and offering assistance if people couldn’t pay. They have become a successful, self-sustaining working model.

Northfield has a donation fund, now holding over $1000 in reserve, to cover fees for applicants without the financial resources. Even many of Northfield’s businesses have been incentivized to contribute to this fund. Many of Northfield’s recruitment efforts have also centered around issuing IDs to college students in town and producing local business incentives to continue. Turnout for IDs was not as high as they initially expected, partly because the program was rolled out over the summer when many college students weren’t in town. Because of the lower than expected number of requests, the city’s library, which administers the IDs, reduced the number of the hours during which IDs are issued.

Data protection for undocumented immigrants extends to ID
With the prospect of municipal IDs becoming a primary source of documentation for many, privacy concerns will become paramount. The data on undocumented people, for example, could be at risk and easily co-opted by measures that target undocumented people.

While there is no one hard and fast rule about what constitutes a “sanctuary city,” Minneapolis does have a separation ordinance in place to protect undocumented people. Police and other city officials are not tasked with finding who is an immigrant or not. They also cannot inquire about a person’s citizenship status unless they are legally detained for a crime. Only in this instance, when someone is in custody, are undocumented people federally mandated to be reported. Given this, and according to MIRAC activists, the Minneapolis Police Department, as well as the city, were “100 percent on board” with honoring municipal IDs. The city’s Clerk page confirms this too, that the municipal IDs will be “recognized by the Minneapolis Police Department, providing enhanced public safety.”

Activists, and the city alike, want the best possible outcome around data privacy. When asked if community members have privacy concerns, Giselda, a Minnesota Immigrant Rights Action Committee volunteer said, “There has been hesitation. But whatever we deal with, even if it were driver’s licenses, we’d be dealing with the exact same thing, which is people’s names and date of birth. This is already on everybody’s mind.”

Many undocumented people give their private information to the government, whether it’s signing children up for school or paying federal taxes. As of right now, the Minnesota Immigrant Rights Action Committee said they do not know of any instances at all of anyone being apprehended by ICE for signing up for a municipal ID. They are striving to be transparent and upfront about the risks and benefits of sharing their privacy. Giselda added, “With no ID at all you risk an interaction that takes you straight to jail.”

The Minnesota Immigrant Movement’s founder also said, “There is nothing to lose.” And, perhaps most importantly, undocumented people have continually said they too want municipal IDs. The push to implement them has not appeared out of thin air or from the side of the city or law enforcement.

Because they know that privacy concerns are unavoidable, the coalition has taken great steps to keep the privacy of Minneapolis residents who would use the ID safe. Since immigration is a federal issue and Minnesota has relaxed data privacy laws, municipal ID protection can get dicey. But one way the coalition is attempting to ensure privacy for those who apply for an ID is using the mechanism of how those IDs would be given out: enter your local library. “Library data is protected – all of it,” said Zurawski.

IDs could have a barcode that could also be used as a library card or even a metro card. Metro Transit has also shown enthusiasm for the idea that IDs could be used as a Go-To card, which hold stored value for transit systems around the city, something which activists are also elated about because Metro Transit data is also explicitly protected under data privacy laws.

A silver lining in the current ordinance is that it already includes language explicitly stating that home addresses are private data. “By adding extra protections, we are doing everything we can to keep that data private,” said Zurawski.

Not only will they benefit undocumented persons in Minneapolis, municipal IDs will streamline life for U.S.-born residents in Minneapolis. People who don’t drive or who wish to self-elect their listed gender can do so now, because of municipal IDs. Minnesota Immigrant Rights Action Committee is adamant that they want people of all different statuses to apply for IDs, speaking about a “campaign for inclusiveness.”

Back in 2017, IDs for undocumented people seemed a sure win. Even then-Governor Mark Dayton publicly supported allowing undocumented residents to get driver’s licenses. But as recent as April 5, 2019, a Democratic-led Minnesota House was joined by the Freedom to Drive coalition and passed a proposal to allow all and any Minnesotan residents to get driver’s licenses. This move, hopefully, will portend just what awaits municipal IDs this year. Indeed, what will ensure the future of municipal IDs in 2019 is the involvement of all Minneapolis residents, regardless of their documented status.

As for what will happen if the measure doesn’t pass, Giselda said, “This has been a ten-year campaign. It started way before I got here. We’re not just going to back off.”

One thing is clear: The push for municipal IDs have become a community effort, and one that could change the sentiment of community goodwill in Minneapolis for the long term.