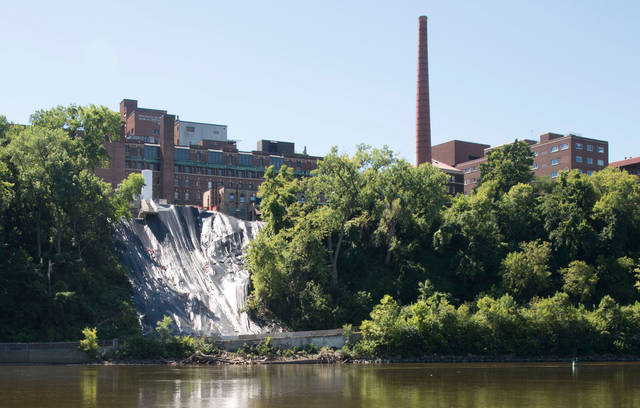 (Photo by Juliet Farmer) The mudslide on West Bank remains a work in progress on Monday. The mudslide, which occurred at the base of the University of Minnesota's Fairview Medical Center in June, now blocks bicyclists and pedestrians from using the West Bank trail.

A mudslide that occurred on the University of Minnesota’s West Bank in late June will keep a stretch of West River Parkway closed until 2015.

The Minneapolis Park and Recreation Board announced last month that a one-mile portion of the road will remain closed to all commuters because of safety concerns. On Wednesday, the board will vote to enter an agreement with a local engineering consulting firm that would oversee permanent fixes to the hillside.

If approved, Barr Engineering will oversee the hill’s reconstruction, which is set to begin in the spring. The resolution says Minneapolis has allocated up to $640,000 for the project.

Justin Long, the city board’s assistant superintendent for environmental stewardship, said a definitive solution to secure the area has yet to be decided, but engineers are still reviewing options.

He said each scenario would include adding clean, engineered soil and walls along the hillside, but the engineers are still determining the best location for the walls.

The remaining soil is currently being protected by a geotechnical fabric that prevents rain from further deteriorating the soil and minimizes erosion, Long said.

The area where the mudslide occurred is located just below the University of Minnesota Medical Center, Fairview, on the West Bank.

Fairview spokeswoman Jennifer Amundson said that on the night of the mudslide, the building was carefully assessed and “determined to be structurally sound.” Since that night, she said, “it’s been business as usual.”

Though Amundson said the Park Board owns most of the land where the mudslide occurred, the hospital is working closely with the board to determine a permanent fix.

West River Parkway was one of many places in Minnesota that received heavy rain this summer.

In late July, President Barack Obama declared a state of disaster in Minnesota because of severe storms and flooding, according to a Federal Emergency Management Agency press release. The state will receive an estimated $9.4 million in aid from FEMA, some of which Long said will help finance the mudslide area reconstruction project.

While the incident occurred near a busy area on the West Bank, Long said the road closure shouldn’t affect University students’ commute to campus.