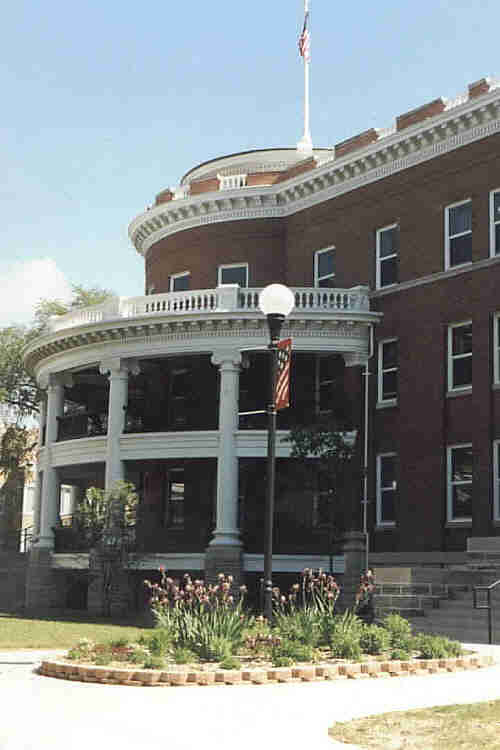 According to the MnVeteransHomes.org website: "Minnesota Veterans Home - Minneapolis, once called the Old Soldier’s Home, was established in 1887 for indigent Veterans of the Civil War. The Home is located on a 51 acre wooded campus overlooking the Mississippi River near Minnehaha Falls. The original intent was to create a beautiful, comfortable community for Veterans in need of care in their later years.  That spirit of caring continues today as staff follow a “WE CARE” philosophy .  “WE CARE” means a “willingness to serve in an environment of person-centered care with compassion, accountability, respect and dignity with excellence as our standard.”  The Home provides skilled nursing care, which includes Alzheimer’s/dementia care, domiciliary care and adult day care will be available in the near future.  Currently the Home cares for 291 Residents requiring skilled care and 50 Residents in the domiciliary." (Photo courtesy of MnVeteransHomes.org)

Last year in August a state of the art 100-room skilled nursing facility opened and replaced a condemned Depression-era building. That was Phase 1 of a 2009 Master Plan. Phase 2 called for the demolition and rebuilding of Building 17’s north wing. This was funded in 2010 but the Phase 2 is contingent upon funding Phase 3, the demolition and rebuilding of that building’s South Wing.

On April 23rd, Dayton spokesperson Katharine Tinucci reiterated support for the project, stating, “Governor Dayton has committed to funding the next phase of the Minneapolis Veterans Home in his last two bonding proposals.”

FULL DISCLOSURE: Tommy Johnson is a veteran and advocates for veterans’ righs.

Although the House bonding bill does not contain funding for the Home, on the same day House Speaker Paul Thissen said, “The Minneapolis Veterans Home project will be part of the discussion this session as we work to pass a bonding bill that can be signed into law.”

A request for comment to the DFL Senate Caucus was not returned. The 2010 DFL Ongoing Platform (amended 2012) states the party supports “Providing timely and sufficient funding to appropriate government agencies to honor all our obligations to active duty military and military veterans.” A request for comment on the DFL’s position on funding for Phase 3 of the Master Plan for the Minneapolis Veterans Home possibly being delayed for the 2nd session in a row was not returned.

Reached for comment on May 6, Lee Ulferts, chair of a group of veterans organizations called The Commander’s Task Force, said, “The unfortunate thing is if we go ahead with Phase 2 without the assurance that Phase 3 will be completed the whole design of Phase 2 will have to be revisited, as it will mean dead ending electrical, sewer, gas and water. The cost to do this is not insignificant. To the Task Force, it just seems incomprehensible that proper funding for this home is not provided. And now it seems that we can dig into tax dollars to restore the State Capitol for $100 million plus but we still can’t find the money to provide beds for 100 veterans. When did our priorities get so screwed up?”