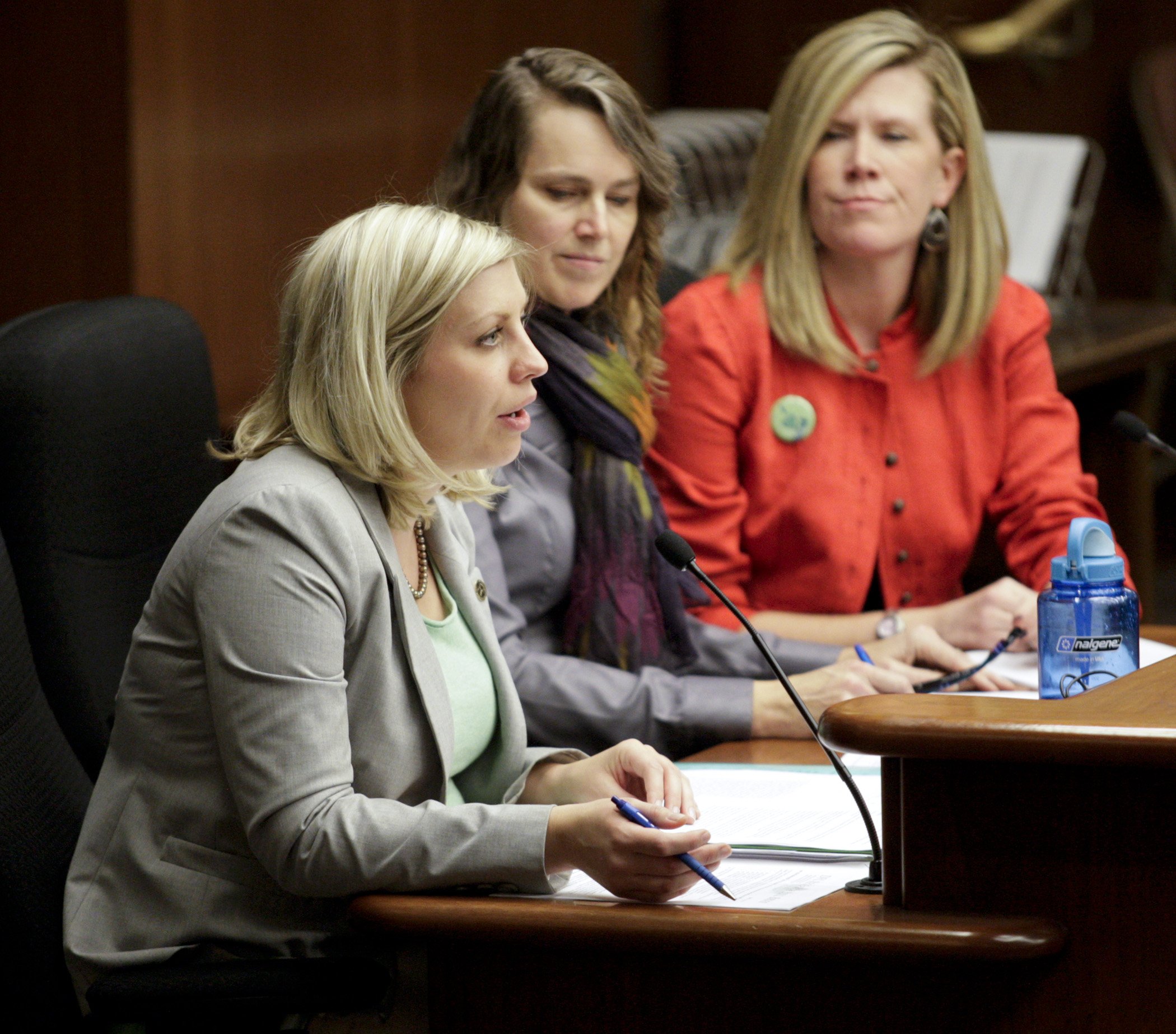 Rep. Carly Melin presents her bill, HF2536, the Women’s Economic Security Act, to the House Jobs and Economic Development Finance and Policy Committee March 20. With her are Debra Fitzpatrick, center, director of the Center on Women and Public Policy at the Humphrey School of Public Affairs, and Kim Borton, director of programs for the Women’s Foundation of Minnesota. (Photos by Paul Battaglia)

When little girls fantasize about what they want to grow up to be, some might imagine becoming an astronaut or archeologist while others might want to become lawyers or doctors. Others still might want to own a business. Yet, in the end, many don’t follow through with those dreams, thus creating a cycle of women going into lower wage jobs that are considered more traditionally female.

This session, representatives have heard many bills regarding the economic status of women and ways to bring women into higher wage, higher-impact careers, or jobs that are dubbed “traditionally male.” If you think of the movie “North Country,” that starred Charlize Theron and was based on the true story of sexual harassment at a mine on the Iron Range, a woman might not want to pursue that traditionally male profession.

But times continue to change.

“This goes back more than 100 years,” said Rep. John Persell (DFL-Bemidji) of women and work. “My mother was a women’s liberation person. To all the men out there who have a problem with this: You need to put your big boy pants on and deal with this. Our mothers and daughters and sisters need this.”

This is why House Speaker Paul Thissen (DFL-Mpls) recruited women’s organizations after the 2013 legislative session to research ways to improve the lives of working women and to create the Women’s Economic Security Act.

“A big part of what we’ve been trying to do is growing the middle class,” Thissen said in a recent interview. “As we dug deeper into it after last session we saw that the people who are struggling the most are women. So, we looked at the obstacles, ‘OK, why is that?’ That was the genesis of the discussion.”

Women make up more than 51 percent of the state’s workforce. Thissen said their well-being clearly has an impact on the state’s economy. With many families headed by women today, the welfare of their children is very much dependent on a woman’s economic status. And that’s where the room for growth is as well. More than 60 percent of low-wage workers are women who make the minimum wage or less.

“The way that the economy is changing, and the way the job market is changing, the things that we think of that are helping women are actually helping men as well,” Thissen said. “It used to be an issue of a glass ceiling, and that’s still the truth, but now we have the issue of a collapsing floor as well. What we’re trying to do with this act is put some supports into that floor.”

During last session, the Legislature decided to reappoint the Office on the Economic Status of Women, a nonpartisan legislative commission that examines just that, the economic status of women. The office sat empty starting in 2011. Barbara Battiste was appointed as the director in January.

“What we’re doing is looking at where the disparity is when it comes to pay equity,” she said. “Women cluster themselves in health care, administration and the service industry. These careers don’t generate enough income to support their families.” 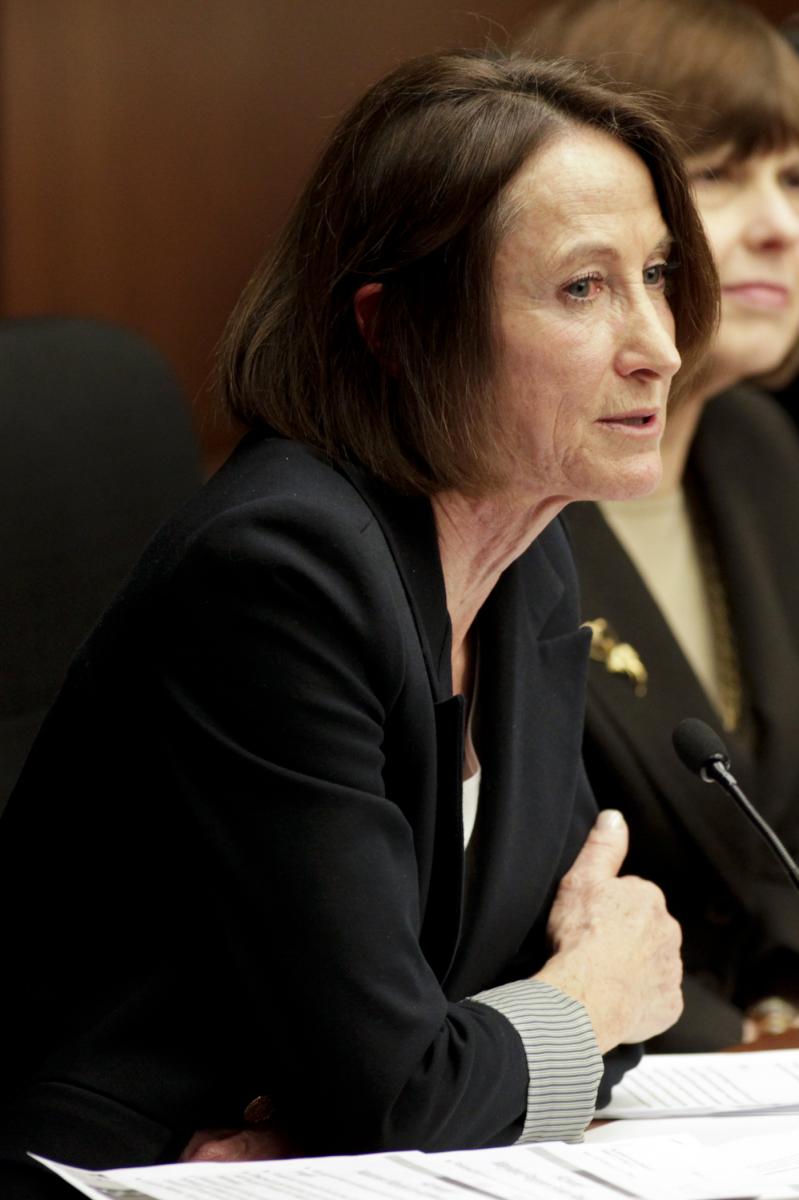 Left: Barbara Battiste, director of the Minnesota Office on the Economic Status of Women, testifies March 6 before the House Jobs and Economic Development Finance and Policy Committee HF2243.

In Minnesota, women own one in four businesses and women in hourly wage jobs still make only 80 cents for every $1 men earn. Female entrepreneurs make 60 cents for every $1. Battiste said this is because women start businesses that don’t have high economic impact. For instance, a woman’s business could be a virtual assistant company, where she does everything an on-site assistant would do like scheduling appointments or helping with administrative work. This would be considered a part of the service industry. While it’s a worthwhile service, by comparison a man is more likely to create a technology startup that would be much more likely to generate high-impact income. The man might be creating the next “Angry Birds,” while the woman is booking a plane ticket for someone else.

Research done by the University of Minnesota Humphrey School’s Center on Women and Public Policy and the Women’s Foundation of Minnesota found that the state continues to be a national leader in women’s workforce participation, with women earning a majority of all college degrees. However, this fact has still not translated into economic equality.

“Forty percent of the pay gap is women doing different work than men,” said Debra Fitzpatrick, the center’s director. “Desegregation in the workforce stalled out and is now increasing.”

In the 2011-2012 school year, construction programs saw just 3 percent of program graduates that were women. The reason? “Women lack an awareness of these jobs and lack the preparatory skills to be accepted into apprenticeship programs,” Fitzpatrick said.

And this fact points to girls and boys being treated differently, a topic that rubbed one representative the wrong way.

Rep. Andrea Kieffer (R-Woodbury) was outspoken during hearings on the various bills included in the Women’s Economic Security Act. During one hearing, she said that women asking for so much special treatment make them look like “whiners.”

“I’m amazed at the push back and assumptions from people,” she said of reaction to her comment. “I knew that as soon as that came out of my mouth everyone would jump on it. But people have no idea when I left my parents’ home, how much debt I had when I left college or how many jobs I’ve had. They don’t know where I’m coming from.”

She said it frustrates her when any group asks for special treatment. “It sends an opposite message of, ‘I want to be treated equally.’ In some ways, I find the bills condescending towards women by acting like women can’t figure out how to do this on their own.”

Though the world is changing and more women are holding executive positions within companies, Kieffer said it’s sometimes more about instinct and that women and girls move more naturally to verbal professions and the arts.

“My dad was an engineer and I was a math whiz from when I was very little,” she said. “He tried to encourage me to be excited about science fairs. I’d win ribbons, but it’s just not what I was interested in. Kids today have so many more choices and opportunities that I think this will eventually correct itself.”

The Women’s Economic Security Act, also known as HF2536, is sponsored by Rep. Carly Melin (DFL-Hibbing), and encompasses seven bills heard this session on creating a better future for women. The provisions include: