When the economy isn’t showing any signs of movement, you might think that economists don’t have a lot to talk about.  However, that point of view neglects one very important part of the ol’ dismal science –economists always have to make work for themselves in order to remain employed.  That gets us to some arcane debates over things most people I know think are pretty obvious.

Paul Krugman often gives us a good popular entry point into these debates, and his last column is no different.  Longtime readers will note that I have never been a fan of Krugman (putting it kindly), but I want to note that in this article he is actively promoting the handle “Depression” for our economic state.  But I want to take issue with him over three main topics:  The length of this Depression, the nature of Keynsianism, and the simple fact that my term “Managed Depression” is way cooler than his “Lesser Depression”.

I believe that the length of this Depression is critical to understanding its context, and thus how we get out of it.  Krugman refers to the “prolonged era of high unemployment that began with the Great Recession of 2007-2009”, a reference that can only be made to the headline unemployment rate, which is so full of fudge that it should never be taken seriously.  Take a look instead at this data on median term of unemployment in weeks, from the St Louis Federal Reserve: 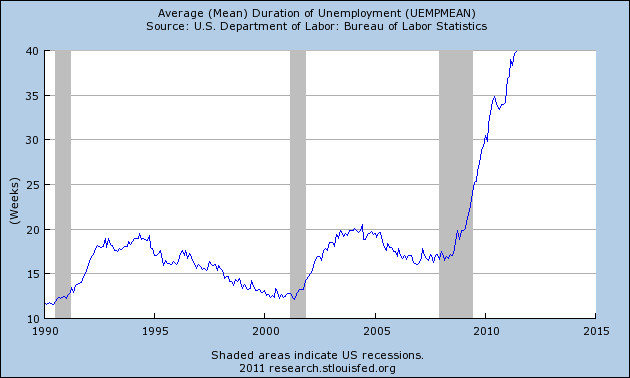 Note that after the recession of 1990 the duration of unemployment slowly dropped back below the 60 year average of about 14 weeks, a typical response to a recession.  After 2001 we see a drop in unemployment duration, but never even close to the mean before leveling off.  That is unique in postwar recoveries, underlying a significant restructuring.  Note that the major flaw in the headline unemployment rate is that it removes “discouraged workers”, or those unemployed so long they have supposedly given up looking.

That may sound like a quibble, but it isn’t.  The real debate is what we should do about this situation, and Krugman is an old-fashioned Keynesian.  His belief is that government spending, nearly any kind, will help raise demand and thus get people spending.  It’s a minority view contrasted to the majority Friedmanite belief that increasing the money supply will boost economic activity generally (ie, “supply side”).  Both of these are being met with another view increasingly being called “Fisherian” after economist Irving Fisher.

The Fisherian view is that credit bubbles cause economic downturns, and that the most important thing that government can do is to have a steady hand at the tiller without running up a large deficit or injecting money into the economy through Fed policy.  Variations of this are taking hold across the world, particularly in the US, which explains some of the call to reduce deficit spending immediately.

For my own taste, all of this is far too academic to be taken completely at face value.  I think that Krugman and his followers need to seriously think what a Keynesian stimulus looks like after more than a generation of incredible debt has been run up constantly goosing the economy.  The Friedmanites have to explain their more recently lousy track record of expanding the money supply only to see bank reserve bloat out beyond reason – with almost no increase in economic activity.  But the Fisherians pose the biggest threat of all by essentially saying that backing government out of the economy is essential just as the duration of unemployment is reaching historic peaks.

It is true that overall national debt is reaching a crisis stage that gives us little room to operate.  Caution about deficits is at least reasonable.

A more practical view is that we have experienced one big credit bubble, washing first over the stock market in the 1990s and then seeking a stable return by plunging into the once conservative real estate sector.  That implies that Fisherians are right, but people still need to eat and move forward into the developing new economy, and the sooner we can get everyone thinking beyond the next meal the sooner we’ll have opportunities in the private sector that are worth investing in.

In short, it’s not the absolute level of how much the government spends to “prime the pump” and get the economy moving, it’s what it does to move forward that counts.

Some of this may sound like a quibble when I take on Krugman.  It isn’t.  This debate, a bit subtle at times, is between the old left that has been looking awfully tired lately and a new, more engaged progressive left.  I’m happy that Krugman is using the term “Depression”, but it’s a Managed Depression that has an intelligent role for government built into it.  The nature of that role is the heart of it all.