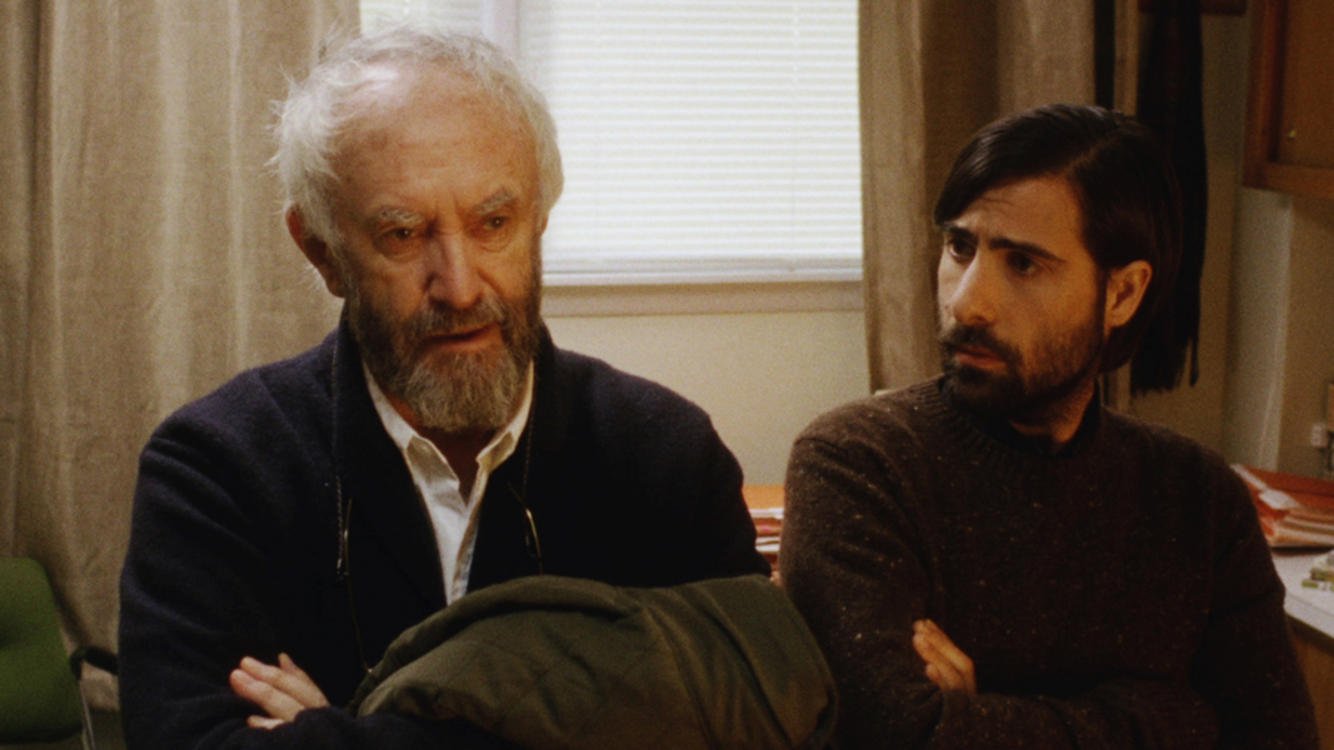 As I was preparing my thoughts for this consideration of Listen Up Phillip I scribbled down something about how DP Sean Price Williams emulated the look of 16mm very well with his DSLR photography. Turns out that this was filmed in Super 16mm and just happens to look like low-budget DSLR cinema. Budding cinematographers can fuss and debate over whether or not this technical choice paid off, but the end result is the same for me. This film uses many elements to achieve a look comparable to early ’70s faux verite filmmaking. Director Alex Ross Perry quotes Cassavetes as an inspiration in the press kit. The shaky, constantly searching for focus camera style certainly gets that aspect of Cassavetes down pat.

Listen Up Philip is the story of a relatively successful novelist (of the literary variety) who is a pretty unbearable human being. The film presents Philip Lewis Friedman (Jason Schwartzman) as an artist whose difficult nature eclipses the actual scale of his talent. Schwartzman plays this character as if he were the dark shadow of Jonathan Ames, the struggling writer he plays in “Bored to Death”. Jonathan Ames searches for success of any kind, Philip Friedman seeks to cram his success down everyone’s throat. Finding sympathy for Philip Friedman is difficult, and the film makes no great effort to illicit it. In the quietest moments of Schwartzman’s performance, we can see a bitter and angry artist, but never one who is able to see himself as others do. He is tormented in equal parts by Joshua Fawn (Keith Poulson), a contemporary who shares many traits with David Foster Wallace, and Ike Zimmerman (Jonathan Pryce) an older author who offers both advice and cautionary tales of literary fame.

Elizabeth Moss brings his transitional girlfriend Ashley to the screen. Ashley is a talented photographer in her own right, and there is no lack of creative jealousy flowing from Philip to her. The tension in their relationship is pretty well rendered and this conflict colors every decision Philip makes throughout the film. She is allowed to shine as a movie actress, sometimes transcending limited dialogue to offer a more subtle visual communication. This is a saving grace for the film, as the director is clearly counting on letting most of his film occur in the geography of the human face. Honestly, I think he’s going for some kind of record for most extreme close-ups in one film.

The parts of Listen Up Philip that work seem to do so in spite of the rest of it. There’s an ambitious literary approach to plot that lets the film’s point-of-view slide away from Philip for long stretches of time. This is offset by an “authorial” voice-over, delivered by Eric Bogosian, which more often than not feels like a narrative cheat rather than a clever commentary on the screen events. The voice seldom says anything that isn’t obvious in context or performance. Removing this would do little damage with the exception of suffering a little less fidelity to Cassavetes-era filmmaking.

Schwartzman, Moss and Pryce deliver very solid cinematic performances. Unfortunately, this is often despite dialogue and framing that felt like student films I’ve worked on in the distant past (the 16mm look didn’t help this either). Maybe the supporting characters were too star-struck to really act around the leads, or maybe Perry was too focused on the leads to offer the supporting players guidance, but many of these parts felt incomplete and rushed. Similar to what happens when you ask a friend to just play a part in your film because they are available. Likewise, as well as the actors make use of the many close-ups in the film, every scene inevitably wound down to two dueling close-ups and that created monotony in a film that had little room to spare in the “eventful” category.

I know in the world of literature, the world that this film takes as its subject, there is some discontent with the many young writers who are writing lots of words about things not all that important and people who are not all that interesting. Some call it the “Curse of the MFA.” Philip is right at the center of this scene, which unfortunately brings this film into it with him. There’s a strange kind of integrity to this, showing this sort of literature for the shallowness it requires, but the film doesn’t do much beyond that. I would say that a good use for this film would be to screen it during orientation at almost any MFA Writing Program.

Everything about Listen Up Philip indicates that Perry set out to make a film that would be quite a gamble. Not just the usual box office gamble, but also the risk one takes in creating a limited release indie film that makes no real effort at being “likable.” I have to give the filmmakers credit for creating both a character and a film that are resolutely difficult. This is a brave choice and many worse sins are on display in nearby theaters. However, someone that enjoys a film like this also hopes for a feeling that is greater than the sum of the onscreen misery. I didn’t feel anything like this as the credits rolled, a feeling I expect Philip himself shares.

Inversely, this film shows that there is something more to either cinema or literature than the thoughtful arrangement of elements. Whatever this is, it is something that people like Philip, Ike or Joshua can spend their entire lives looking for. That doesn’t mean we all need to watch them do it.

Elisabeth Moss in Listen Up Philip distributed by Tribeca Film.

Jonathan Pryce in Listen Up Philip distributed by Tribeca Film.

Jonathan Pryce and Jason Schwartzman in Listen Up Philip distributed by Tribeca Film.