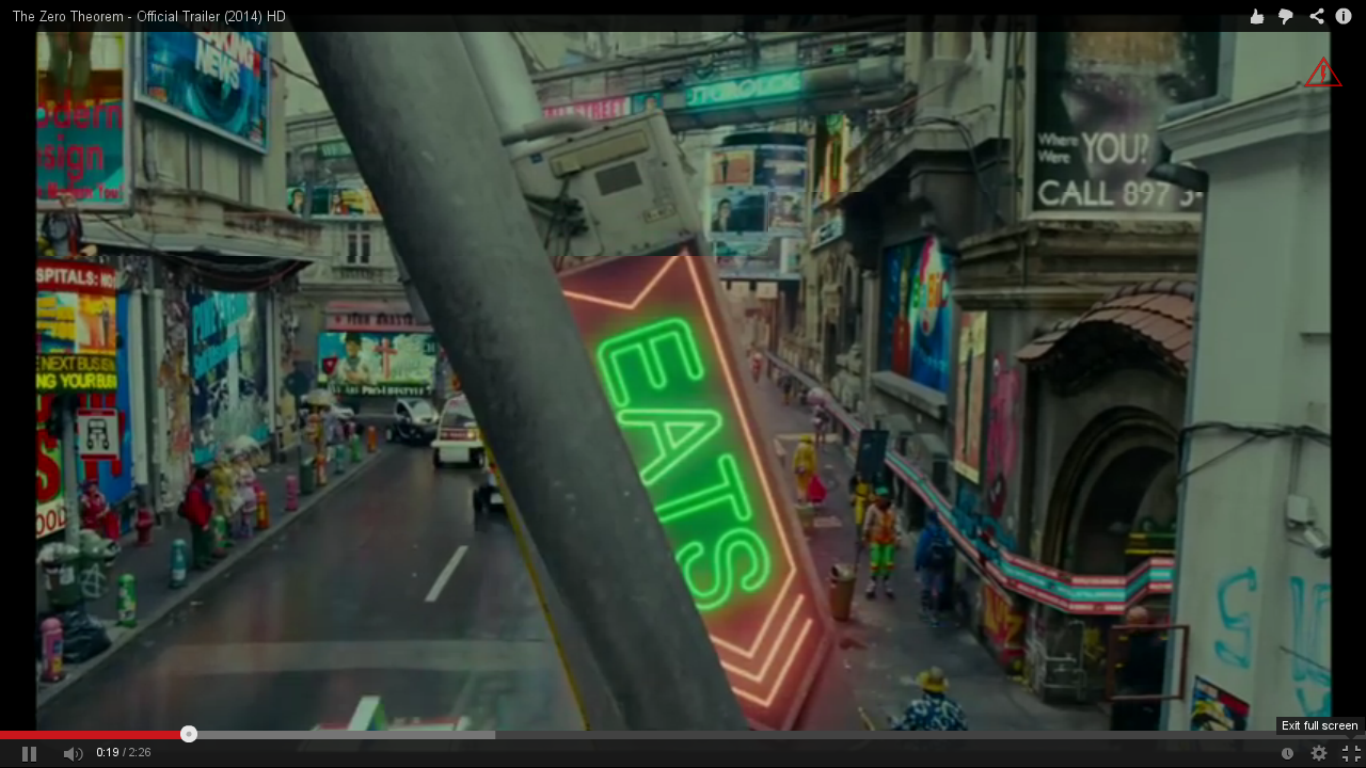 (Screenshot from 'The Zero Theorem' trailer)

A famous Monty Python sketch depicts an archbishop and a humanist philosopher wrestling to determine whether God exists. The British comedy team’s comic spirit exposed the ludicrous attempt to definitively answer imponderable questions while insisting that it was equally silly to fight over such issues. Their deep silliness could almost constitute the mythology of the comic that Monty Python symbolized. It took on the Big Questions and found a deeper silliness beneath philosophy and theology. It embodied a mythic trickster silliness that was more ultimate – and ultimately healing – than abstractions. It salved the suppurating wounds of history and religious hatred with a balm of cosmic nonsense. This mythic silliness Gilliam has largely jettisoned in his visually discombobulating and wonderfully flawed, The Zero Theorem. It offers a doggedly monk-like parable from the Church of New Atheism whose highest truth is delusion, delusion, all is delusion. The wrestling match has been restaged, but it is mythic silliness that has been thrown mercilessly out of the ring. It is a shock to realize that Gilliam, a luminously erratic firework of creativity, offers up a dogmatic anti-sermon.

His protagonist is the bald and eyebrow-deprived Christoph Waltz as Qohen Leth, a computer programmer given the task of calculating the zero theorem in a dystopian futuristic London. Something of a human zero himself, Qohen is so alienated that he fills his isolation by referring to himself in plural pronouns. His encounters with Management (Matt Damon as a chameleon-like paternalistic bureaucrat) give him permission to work at home in an increasingly stressful quest to solve this theorem which proves the universe is ultimately devoid of meaning. The Management–an Orwellian corporation with a pervasive panoply of surveillance devices–acts as if the zero theorem is the core assumption of its corporate identity. Chaos triggers money making rather than profound inquiry. In a significant visual detail, a decapitated crucifix is topped with a prying security camera monitoring Qohen’s progress incessantly. The central image is a swirling vortex, a Black Hole of nothingness that seems to mysteriously reside in the heart of Management’s main frame and is an obsessive feature of Leth’s imagination.

Waltz gives an astounding performance as he swirls into his own vortex of alienation and despair. Qohen Leth has faith in one possibility: that someone will call back on his phone to explain his life’s meaning. Instead into his life comes Bainsley (Melissa Thierry), a call girl, whose virtual reality suits connect them in idyllic tropical island landscapes of desire. But can true love be so easily plugged and pixilated? This is a fable with both Joycean and Beckettian dimensions. The phone call that Qohen Leth longs for recalls Stephen Dedalus in the ‘Proteus’ episode of Ulysses longing for a call to Edenville. This call is Qohen’s Godot. Is it a delusion or will it occur?

However, Gilliam’s quest is to disprove the meaning of quests. His imagination negates vision. If, as the scholar, Lewis Hyde, suggests in Trickster Makes This World, the trickster is amoral and a culture-bearing mischief maker, then Gilliam is the Hieronymous Bosch-like trickster of the post-modern cinema. His philosophy is not quite nihilism–it is instead the philosophy of the vanishing point: the blip that flickers out towards nothing but that provides and guarantees perspective. Qohen is caught in the vanishing point that organizes the visual florabundance of Gilliam’s London–a pageant of invasively overwhelming screen ads and high gloss plastic fashion.

Gilliam offers a double negation of both medievalism and post-modernism. Qohen Leth’s home is a former monastery and Bosch-like Gilliam offers up a simultaneity – medievalism and postmodernism flow and interdigitate like the swirling psychedelic graffiti that varnishes Leth’s ecclesiastical home’s architecture. The God-saturated epoch with its hierarchies and organization was simply an earlier form of the corporation-dominated dystopic future. Neither can escape the zero theorem. The one resolutely denied it; the other presumes and thrives on it. Thus the dogma of the zero theorem, this anti-God of post-modernist corporate consumerism, is mockingly conjoined with the medieval suggesting an Age of Faith and an Age of Faithlessness are co-equal and absurdly identical under the bright heaven of Delusion. This is Gilliam’s anarchic and self-defeating mirage. It collapses because it is dogmatic. The parody has forgotten its original. Gilliam can’t escape his own vortex of nothingness which pulls the movie into itself. Here spectacle, like in Cameron’s Avatar, drowns out narrative. Character is flattened. Possibility equals negation. Thought is muddied with dogmatic atheism.

The film has a Bosch-like brilliance; an excess; and, a gladdening immensity. It offers not what Beckett called a stain on the silence, but more of a broken stained glass window over the void. When it catches the light, Gilliam’s questing anti-quest, his dogmatic anti-sermon, can provoke profound wonder at our human power to create such absolute negations. The Black Hole is Qohen Lentz’s soul–into it he vanishes. The universe vanishes and leaves only Terry Gilliam’s floating imp grin which will in turn burp out into a vanishing point. Still, as fables of gorgeously orchestrated negation go, it is well worth a look!