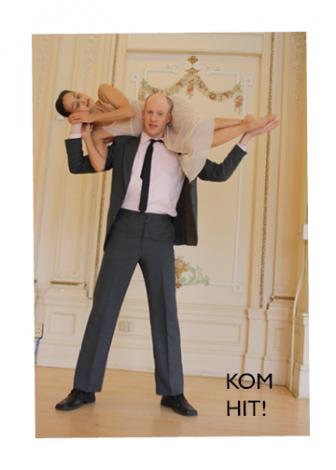 Johan August Strindberg is known mostly as a prolific author of plays, novels, poetry and essays; he also painted, married around four times and was mentally unstable. His most produced play is likely Miss Julie (1888), a naturalistic and class-criticizing piece. He dabbled in philosophy and the occult and wrote novels considered to be Sweden’s first modern literature. He was also fond of photographing himself (see ASI’s exhibit ” The Image of Strindberg“). The American Swedish Institute is presenting an array of events to acquaint us with the work of this enigmatic figure.

You are given a mustache to wear upon arriving to see Sally Rousse and Noah Bremer’s Kom Hit! (which translates to Come Here!). As the mustachioed collect in the foyer, you can judge who is up for the ruse by who actually decides to stick the mustache on their face. A lithe, floating dancer gets the action started and leads us to the castle entrance. The mustache, she explains, allows us to be Strindberg being confronted by the ghosts of his life. The performance proceeds through the building and the audience has to decide which way to go, which performer to follow and which version of the show to experience. Since you are unable to be in multiple rooms at once, you have to resign yourself to enjoy whatever it is you end up seeing. Musical moments happen no matter which way you turn, from piped classical to an accordion and electric guitar, men moving in the rounded turret space, and women in lacey overdresses (a choice connected to a display on the third floor).

Pieces fall into place and make more or less sense as you absorb movement, sound and the elaborate beauty of the ornate castle in constant flow. You are just there, occasionally they will usher you in a direction, but generally you can just follow the crowd. Some of the characters speak monologues, but mostly it is dance, and we are sung on our way out the door at the end (which should have been in Swedish, not English, if you ask me). Rousse has been exploring the Strindberg character Eleanora, but she has also been exposing the process during her three-week residency as she installed herself in the castle and allowed visitors to observe her demonstrating the creative process, including costume making and rehearsing. The end result is a sweet mixture of beauty and place. Where it lacks in emotional punch, it makes up for in the unusually intriguing delivery–a moving experience, even if more physically than emotionally.

But this is only one part of exploring Strindberg at the ASI this month. If are looking for more concrete information and theatrical examples of the playwright, Peter Beard will be presenting a series of scenes from Strindberg’s plays followed by discussions on Wednesdays in July, free with museum admission. Expand your knowledge and your experience of the castle with (or as) Strindberg.