Last week I wrote a column about Move MN, the transportation bill at the legislature, calling it a “litmus test for pragmatism.” Here was the punchline:

If I were a legislator representing Saint Paul, at this point I’d remain on the fence about the Move MN legislation. I’d work hard to get MNDOT to commit to using revenue to maintain what we already have. I’d want them to promise to fix the thousand deficient bridges through the state before building any fancy fractal interchanges, freeway expansions past Maple Grove, or bypasses on the Iron Range. I’d try to get Metro Transit to commit to transit in places that already support walkable density before spending millions promoting development in roadside parking lots.

While I stand by the points I made in that piece, since then I’ve had a bunch of conversations with folks here at streets.mn and who work with the legislature. I guess I’ve kinda sorta changed my mind. The Move MN proposal seems like a good idea to me. In the abstract, it’s not perfect. But within the Kafkaesque world of US transit policy, this is a good deal.

Transit Funding is Always a Mess

The first reason why Move MN is a good deal is that US transit policy is a complete mish-mash. For roads, we’ve developed a massive Robert Moses ”lock box” of dedicated funds where top-down bureaucracies wield money and regulations with impunity. I hardly need to remind you of the million problems with the asphalt-industrial complex, but the key point is that DOTs don’t have to scrape together road money from the corners of governmental couch cushions. (At least not yet…)

Transit money, on the other hand, is crude legislative sausage. The course of true transit never did run smooth, and each metro area runs into a few intractable problems. The first is a constant struggle between jurisdictions. Big metros that cross state lines have particular difficulty (See Christie, Chris). Imagine having to compromise with Scott Walker every time you wanted to fund a new line! Luckily in Met Council Minnesota, county shenanigans aside, jurisdictions aren’t much of an issue.

The second big problem is the state vs. metro political divide. All cities deal with state legislatures that rarely give them power to raise taxes to pay for transit. New York and Chicago both struggle to pay for their aging (and effective) transit systems, and plans to raise money through tolling or taxes are routinely shot down by state lawmakers.

And those are the “good, urban, blue” states. Atlanta built its transit system with zero state money and little regional cooperation (and MARTA is half-assed as a result). The same is true for Arizona, Seattle, and Denver. LA is a mess. I could go on…

I suppose we’ve been lucky here in Minnesota that some state general fund money has gone to build our two light rail lines. I don’t know all the hairy details, but in general, our Metropolitan government system seems to get some statewide support when it needs it (e.g. the MVST money). That said, at the rate of one line per decade Minnesotans will be stuck it their cars for a long time.

Metro Taxing Autonomy is the Key

So how have all these places paid for their transit investments? In almost all cases, state legislatures have given metro areas some autonomy to raise their own taxes. Places like Denver, Indianapolis, and even the Carolinas have received “permission” by states to have hold transit referendums. Most of them pass, and these cities use area sales taxes to pay for transit investments.

I’m sure that the architects of the Move MN proposal have thought of this. Would the state legislature give the 5- or 7- county Metro permission to have a referendum for the .75¢ transit sales tax? If it did, would it pass?

One of the differences is that most of those cities are in the west or the sunbelt, where referendum politics is the norm. I’m guessing that Minnesota policymakers don’t want to go down that messy road, which can lead to all kinds of problematic outcomes. (Though we did reject the odious Voter ID law…) Instead, the “Minnesota way” is to have legislators make the decisions. And despite last minute back-room deals, I can live with that. We have the highest voter turnout in the country (though still too low), and Minnesotans should be proud of our (relatively) well-functioning government. (Just don’t get me started on the Vikings stadium.)

So we have compromise. The metro area gets to pass its regional transit sales tax without a referendum. And the bill raises a whole bunch of money for transit, biking, and walking while throwing a chunk of “gas” money into the pot for roads .

I haven’t shed my previous qualms about the bill. It’d be nice if the metro area could have taxing autonomy without having to compromise with unrelated road interests. (And I agree with Chuck that we need more regional and municipal control over our transportation decisions.) It’d be nice if MN-DOT stood by a “fix it first” policy instead of building new exurban freeways to nowhere. It’d be nice if our transit planners put light rail stops where the people are, and invested only in places that commit to density and walkability. It’d be nice if the lower-case ‘e’s on the Move MN website were shaped differently…

But I’ve spent a few days reading about transit funding in every other city in America, and I’ve yet to find my utopia. Relatively speaking, and despite the SWLRT fiasco, Minnesota has a decent institutional structure for transit investments. All we need now is a bit of freedom to fund our plans, and a smarter conversation about where to invest. The Move MN proposal is a good idea that would do a lot for Twin Cities’ transit. Lobby day is next week. Let’s make this happen. 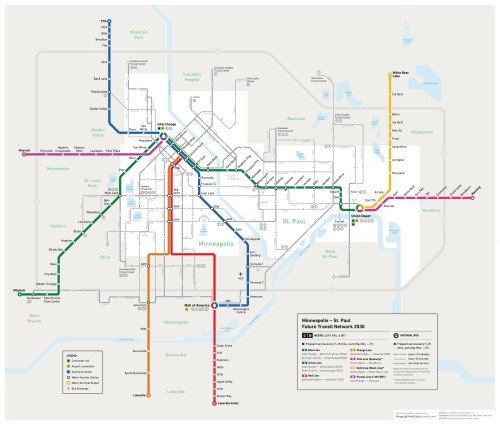