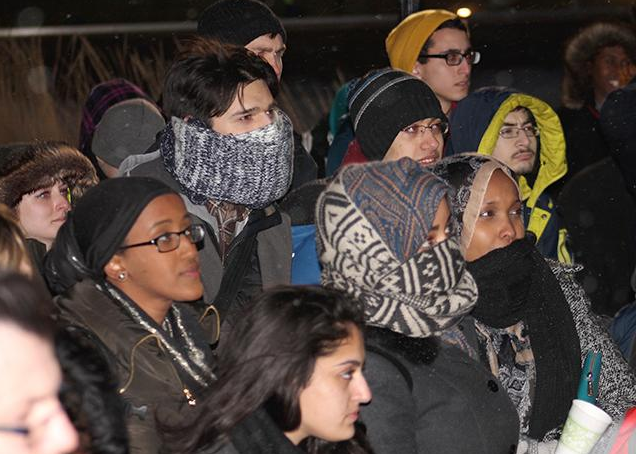 With tears of grief streaming down her cheeks, Nora Nashawaty stood before more than 100 people gathered at the University of Minnesota Wednesday night to commemorate the death of three Muslim students killed earlier this week in North Carolina.

As the evening darkness descended, and the wind blew out their candles, mourners huddled outside the university’s Coffman Memorial Union for prayers and a candlelight vigil in honor of Deah Barakat, Yusor Abu-Salha and Razan Abu-Salha — all high-achieving students at the University of North Carolina.

Craig Stephen Hicks, 46-year-old suspect, has been charged with the shooting, which has shaken the Muslim community in Minnesota and elsewhere in the country.

“It matters that we speak out because mass media seems to think that our voices don’t matter,” Nashawaty, president of Al-Madinah Cultural Center, told the crowd.

One by one, Nashawaty shared accounts of the students, who were shot dead Tuesday evening in an apartment near the university’s Chapel Hill campus, according to various news reports.

Barakat, 23, and Abu-Salha, 21, who got married just six weeks ago, were studying dentistry at the university. Abu-Salha, 19, was an architecture and environmental design student. “Razan’s eye for creativity was unique and unmatched,” Nashawaty said of Abu-Salha. “She often shared her pieces on her various social media accounts and had a blog dedicated to showcasing her phenomenal work.”

“She was humorous, witty,” Nashawaty continued. “She was a free spirit. She had a heart for organizational work and volunteered often in her community. Razan, the world has lost such a bright and remarkable, innovative one in you.”

Yusor Abu-Salha recently returned from a trip to Turkey, where she provided free dental care for Syrian refugees. “Your work, your ethics and everything you stood for is not unnoticed,” Nashawaty said. “You’re a phenomenal human, and the world has lost such a wonderful soul in you.”

Deah Barakat was a passionate sports fan and a basketball player, Nashawaty said. “He was outstanding, kind and giving community leader.”

Conflicting news reports about the motive of the killings have been surfacing on social media, with some people linking the murders with a hate crime and others citing a parking dispute.

A statement released by the Chapel Hill police, for example, states that the “preliminary investigation indicates that the crime was motivated by an ongoing neighbor dispute over parking.”

But like many Muslims around the world, those at the vigil on Wednesday night are calling the attack a hate crime.  “The tragedy, and this is my personal opinion, is a terror attack,” CAIR-MN Executive Director Jaylani Hussein told the crowd. “When you get attacked like that, in execution style, whether ISIS is doing it or some guy here is doing it, that’s a terror attack.”

Hussein added: “The media does not want to talk about it because it’s not the ISIS. It’s not Al-Qaeda. If those names and roles were reversed, we would have a complete difference.”

Millions around the world took their grievance and outrage to social media, with the hashtags #MuslimLivesMatter and #ChipelHillSchooling trending on Facebook and Twitter.

Activist Abrar Rageh encouraged those at the vigil, Muslims and non-Muslims, to promote understanding and tolerance. “Let’s channel this in a positive direction,” she said. “Let’s get to know the people around us. Don’t isolate yourselves.”

Marcus Carrigan, a journalism senior at the University of Minnesota, was one of many non-Muslim students who stood in solidarity with the Muslim community.

“It’s a tragedy,” Carrigan said in an interview. “I’m devastated that violence is continuing to be perpetuated. And I believe that we can make change through conversation and coming together like this.”