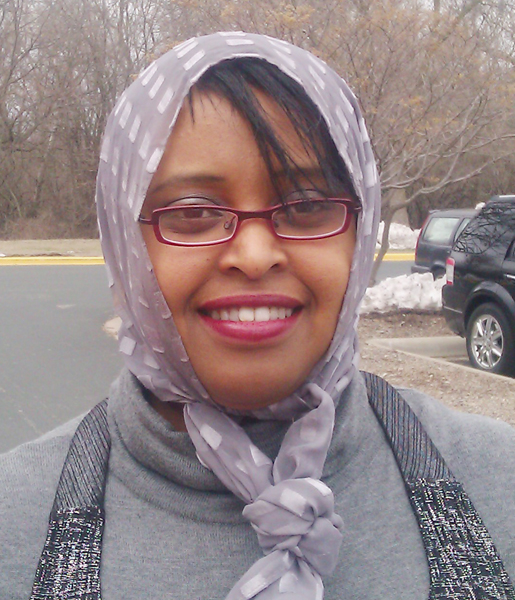 “State legislators want to create two different healthcare policies for kids with autism: one that generously covers the privately insured, and the other that gives minimal coverage to the poor and publicly insured, but both using state funds,” says Idil Abdull of Burnsville and mother of a 10-year-old son with autism.

At age 11, when Abdull came to the United States from her native country of Somalia, she knew very little English and very little about American politics. “The only thing I knew about America was Superman and Rocky [the movie], she says.”

Some 20 years plus since arriving on North American shores, Abdull is now very fluent in both English and the parlance of American politics. “If nothing else, I know how to be loud,” she says.

Like many other families, Abdull says she went through a period of denial about autism. “I couldn’t say the word for many years, because in Africa there is shame around having a disability like autism. But fortunately, I was able to get the help I needed for my son, and he has made great strides in meeting developmental milestones.

“At age two, he walked on his toes, and by age three he still couldn’t talk. All he did was cry. No speech. Applied Behavioral Analysis has helped him greatly, but it’s a treatment that is under-covered by public-health insurance programs.”

According to Autism Speaks, a national advocacy group dedicated to families and children affected by autism, Applied Behavior Analysis (ABA) is widely recognized as a safe and effective treatment for autism and has been endorsed by a number of state and federal agencies, including the U.S. Surgeon General and the New York State Department of Health.

“Over the last decade,” according to the advocate group’s website, “the nation has seen a particularly dramatic increase in the use of ABA to help persons with autism live happy and productive lives. In particular, ABA principles and techniques can foster basic skills such as looking, listening and imitating, as well as complex skills such as reading, conversing and understanding another person’s perspective.”

Called by experts “one of the most divisive issues in the history of pediatrics,” scientists are split over the causes of autism — but most say a combination of genetic and environmental factors are at play.

Autism is referred to by advocates as “the fastest growing developmental disability among children in the U.S,” because it is now more common than Down syndrome, cerebral palsy, and mental retardation combined. Recent estimates given by the federal Centers for Disease Control and Prevention (CDC) are that one in 88 children are affected — health officials say this represents a rise of 10 percent in less than a decade.

The largest increases in autism have been among Hispanic and Black children.

An incurable disorder which affects four times as many boys as girls, autism is characterized by mild to severe impairments in speech, language, communication, and behavior. It is known as a spectrum disorder because it affects each person differently — but persons affected are often described as detached from the social world. Mental retardation is present in almost 75 percent of all children affected by the disorder, which can be diagnosed only by a physician.

Though the bill was not passed, and though the Senate refused all proposals on ABA coverage for now, Abdull says that it is important to continue to fight for resource-poor families, specifically families of African and African American heritage, so that they may equally receive access to ABA treatment.

“If you’re going to mandate private companies, then the very least you can do is to create bills that are responsive to resource-poor families and disabled children. They are just as American and need access to autism coverage just as those with private insurance and financial means.”

Applied Behavioral Analysis (ABA) can require 40 hours a week of in-home treatment, which means that an immense amount of trust and comfort between providers and families be present. Differences in race, socioeconomic status and culture can create a barrier between families on public health insurance and their providers.

“The other part of the problem is that Black children are more likely than other children to be labeled or diagnosed with behavioral disorders like EBD (emotional behavioral disorder) than autism; it’s the diagnoses and the label of autism that opens the door to treatments like ABA,” she says.

“If kids are not properly diagnosed, how can they be properly treated and rehabilitated? How can they get access to proper and effective treatments? There many layers to this problem: from diagnoses, to policy, to access to treatment, Black children are at a disadvantage,” she says.

Abdull says she was able to gain access to ABA therapy for her son because she didn’t take no for an answer. “I kept asking questions. I kept fighting and refusing to give up,” she says, “but many other families grow tired and don’t know their options.

“I’m at the legislature every opportunity I get to fight for families, but it’s a fight that needs more voices, and it needs them urgently!”

As it turns out, learning about Superman and Rocky might have helped to prepare the young Abdull for entry into American politics, where she is quickly becoming a recognized champion for resource-poor families affected by autism.

Michelle Lawrence, MA, MPH, specializes in cooking African-based dishes and relationship-enhancing dining experiences for families and couples. She can be reached at 612-251-9516.