Another sign you’re getting older: every time you walk into a new restaurant, you get a twinge of nostalgia. The new restaurant in this case is the Mosaic Cafe, which opened a couple of weeks ago in the space that previously housed the Glaciers Cafe. The new name pays tribute to the enormous mural, Mosaic of the Americas: Many Strengths Many Struggles, that covers the south wall of the building. 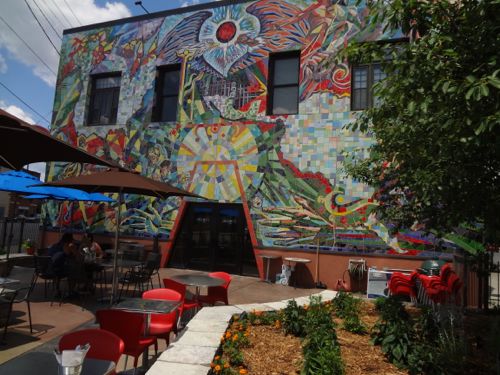 I’m not at all nostalgic about Glaciers, which was transplanted from Wayzata and never seemed to me to fit into the Longfellow neighborhood that well. My nostalgia was for the restaurant that preceded Glaciers, the old Cafe of the Americas, which operated in that space back in the era when the building was home to the Resource Center of the Americas, a non-profit that operated with a mission of educating and organizing people around issues of globalization and justice.

In those days, the Cafe of the Americas offered a menu that reflected its values and audience: Peace Coffee’s fair trade coffee, and a vegetarian-friendly menu that featured burritos and other Latin American dishes. When the Resource Center of the Americas closed its doors in 2007 the Cafe closed as well, and Glaciers moved into the space a year later. (The Resource Center later resumed operations on a much smaller scale, then merged with La Conexion last year to become La Conexion de las Americas, and finally ceased operations earlier this year.)

At any rate, the new Mosaic Cafe has the same owner, Ben Smith. The basic format is the same — salads, sandwiches and burgers, and they still serve their signature frozen custard. But the changes are pretty substantial, with a major remodeling, a new chef-manager, Bill Ruff, and many new menu items.

The new look is more contemporary and very attractive, with bright orange walls, a curved drop ceiling and lots of sunlight. The fenced-in patio that faces the mural has some new seating and shade umbrellas. 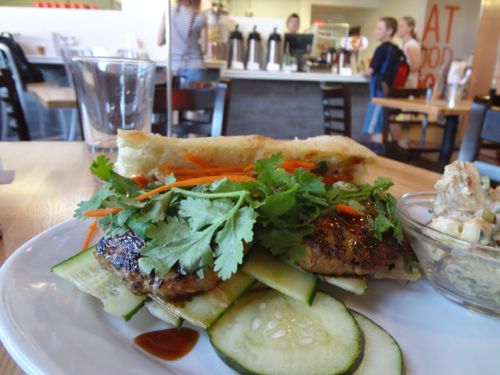 Mosaic opens for breakfast at 8 a.m. Monday through Thursday, 9 a.m. on Friday and Saturday, and 10 a.m. Sunday. At the moment, the breakfast offerings are limited to baked goods (made by pastry chef Christy Gigerich), but starting next week, they’ll be offering hot breakfast items as well. Currently they offer an all-day menu with counter service at lunch and table service at dinner, but there are plans to add nightly dinner specials. Wine and beer are available.

There are still quite a few vegetarian offerings on the menu, including a daily nosh plate of house-made spreads, olives, veggies and cheeses, served with a warm baguette ($8), and a tempeh sloppy Joe ($8.50). Two vegetarian burgers are offered — a Moonburger made with roatsed veggies, black beans and brown rice; and a walnut lentil burger, ($8.95), both topped with lots of stuff, and served with kettle chips.

Most of the dishes I have tried so far have ranged from “pretty good” to “about what you would expect.” Notable highlights include the terrific (and low-fat) oven baked rosemary garlic fries ($6.50, or available as a $3 upgrate to any sandwich or burger order), and the frozen custard. I ordered a Berry Crunchy ($5.50), which consisted of frozen custard topped with strawberries, raspberries, berry crunch and whipped cream ($5.50). I felt very virtuous ordering the walnut lentil burger, which was about what you would expect but deep in my heart I wished I had gotten a California beef burger, or the pastrami reuben ($9.95) instead. I liked the bahn mi’t loaf sandwich, too, stuffed with patties of hoisin and ginger glazed ground pork; cucumbers, and the traditional pickled carrots, cilantro and jalapeno peppers ($8.50), though I am not sure it’s really an improvement over what the Vietnamese places on Eat Street offer (for half the price). 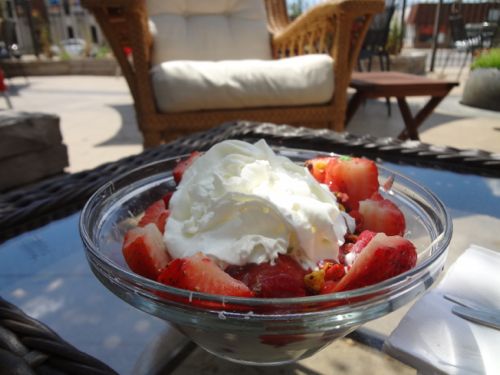 Back in the Glaciers era, I had this uncomfortable feeling that they were talking the local/organic/sustainable talk, but not really committed to it. This time around, the talk feels more convincing. They get their grassfed beef from Thousand Hills, their chickens from Kadejan, and their turkey from Ferndale market in Cannon Falls. They also have links to a bunch of nearby Longfellow businesses and community organizations, including other nearby restaurants. The beer comes from the Harriet Brewing Company, just across the street. (You can’t get any more local than that.)  And impressively, they are co-sponsoring a Roots, Rock & Deep Blues Festival this Saturday (July 14) with Harriet Brewing and Patrick’s Cabaret.

The one odd note is that Peace Coffee, which Glaciers used to serve a couple of years ago, has been replaced by coffee from Brooklyn Center-based Roastery 7, which they bill as “one of the most environmentally and socially responsible cups of coffee possible.” Peace Coffee would be a more obvious choice – they really are local, with their headquarters a few blocks away; their coffee is 100% organic, and they make a lot of their deliveries by bicycle. Comparing the information on the two websites, it sounds like Peace Coffee has a pretty comprehensive vision of what sustainability means, while Roastery 7 has hit on carbon offsets as a smart marketing strategy.