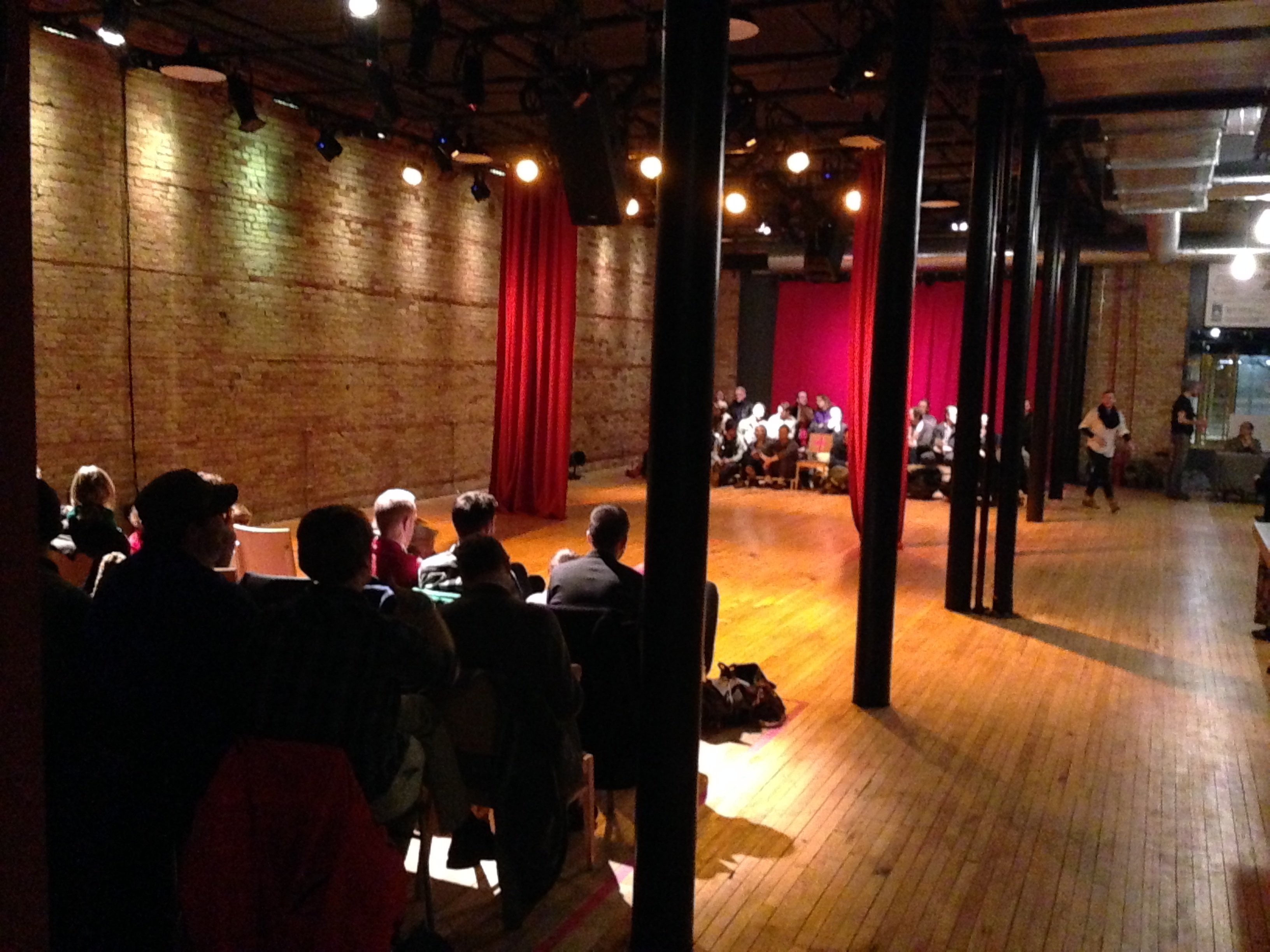 The new space with one possible seating arrangement.

As Sheila Regan reported at the beginning of this month, Bedlam has had access to the space in Lowertown Saint Paul directly across from the Union Depot for almost two years. The slow renovation process she describes is ostensibly almost finished (to wit, the paint and floor were off-gassing this evening, as part of the festive atmosphere). With Morgan Thorsonn’s dance production YOU, the space is officially open for business and there will be more soft openings as they add a bar and full kitchen to complement the performance space.

Bedlam’s offerings always embody the independent spirit of their mission. The theater space is extremely flexible with all variations of seating available to fill the wide-open space – seating plan on demand. For this show, the seating was layered with the front row of low slatted, just-off-the floor seating supplied the beach-chair feeling. Front row seating was separated from the performance area simply with a line of bright pink tape.

Pumping 80s music burst on the scene throughout the show, including Beach Boys, the Bee Gee’s, Michael Jackson and others. The dancers pulse through the space, weaving and briefly encountering or touching each other, short communication, but ultimately uncommitted interactions. Thorson wanted the piece to be about two things, primarily: 1. Audience engagement (a buzz word with funders and generally in the arts at the moment) and 2. Physical conversation – the audience watches the dancers talking and connecting, having a conversation with their bodies. The finest part of the performance, and what lingers, is the sweet intimacy pulling them out of the frenzy as they pump and race by each other. They connect briefly with mirroring movement, and then take off in another direction.

The dancers’ interactions go through various iterations. At times together in powerful pulsing group, but mostly in small partnerings, like conversations at a party. They move around frenetically, stop to chat then settle in smaller constellations before moving on again to the next. Thorson said her process involves setting up the concept – in this case “the physical conversation and the dancers in an ensemble getting to know each other,” and then she lets the dancers show her examples of how they might express that concept. Picking and choosing from their ideas, she pieces together her work.

The dance space is divided by two full-length velvet curtains, opened and retied at different moments. When closed, they separate the space between the audience and the dancers. A few walked through the curtain, changing that relationship to backstage. They also departed in a prancing trot off stage, through the kitchen, light on, out of the kitchen, light out and back on to the dance floor.

Thorson said there were actual conversations that ultimately were lost under the loud music sequences. The ensemble worked through their conversation but never had an outright conflict. Maybe that was ultimately missing, a bit of an emotional kick in some direction, like a trip or a fall that could spice it up. Maybe she chose to depict a company that gets along all the time. Ultimately, the emotional arc falls a little flat, although the performance is still dotted with enjoyable tidbits, like a perfectly pleasant party conversation.

The second goal was well met while charming physical conversations abounded, but the first one, audience engagement, happened if you count a smile or two. Thorson said the hope was that the audience would want to jump up and join the party energy of the opening music. There is such tremendous respect for the audience/viewer barrier, that that wouldn’t happen without an invitation. Based on the description of the piece, I went expecting participation. With the exception of a look or two at the audience, there was minimal meaningful engagement with the audience. Without invitation, even the Bedlam audience was too timid to go on stage. Bedlam’s mission is, “to produce radical works of theatre with a focus on collaboration and a unique blend of professional and community art. Fun, wild, anything-is-possible theater is our passion.” So dare to participate and see what happens. Tell them I told you to. Also, you should just go so that you can say you were at the opening show of the new Bedlam Lowertown space.