Just using this space to share some coverage after the Nomi tornado event of May 22. I’ve already posted a bunch of tornado photos at my Nomi Passenger blog, so gawk there, too. I’ll actually share more news and thoughts here. And lots of “thank yous”!

In the photo above, a massive swarm of volunteers descended upon my yard and the adjacent vacant lot to help remove the trees. They were part of the Urban Homeworks army of helpers and I just can’t express how helpful they were and how much I appreciate their hard work. Thank you Urban Homeworks and volunteers! In this photo, two MPD Mounted Patrol officers can be seen trotting towards 29th and Logan. They started at the pond opening near 27th and were moving so fast that by the time I grabbed my camera and *tried* to focus, they were already all the way across the pond. I loved seeing these officers along with others in squads, trucks and bikes patroling the streets of Nomi. I felt like almost every third or fourth car I saw was a patrol squad either from MPD or a surrounding agency who came to help. I stayed in my house every night, refusing to leave it vulnerable to trespassers, and I was completely comfortable and did not hear a single disruption anywhere. I have a dog who gladly lets me know of anything and everything going on outside, and not a single night did he have anything to bark at. Major props to Chief Dolan, the MPD officers and their helpers from other departments who went above and beyond to keep Nomi residents and businesses safe. Thank you! This volunteer helper, Scott, came down to Nomi with his chainsaw and sought out folks who needed help with downed trees.  Scott’s son Anthony lives in the Victory neighborhood and their family business is the beautiful composters and rain barrels at By The Barrel – you can see Scott and Anthony and the rest of the family right there on their website.  Scott’s volunteer chainsaw mastery made it possible for the Urban Homeworks crew to move the downed trees. Thank you Scott! The Yin family quickly uses my living room as a sorting place to put together what I’ve called “grocery kits” and we passed them out to neighbors on my block. Ann put out the word on her Local D’lish facebook page that she was taking food donations. Her customers came through with bags and bags of food. Some she dropped off to Northpoint and some she brought to Newton Avenue, where she knew neighbors were in need. Having my friends going above and beyond to take care of me and my neighbors whom they don’t even know was so heart warming. Delivering the groceries with them was definitely a highlight of this experience. Thank you Yins and Local D’lish customers! Today I went to Lowry Cafe for dinner. I snapped the photo above of the wait staff on duty tonight. Left to right we have Jiggity Jake, Jazzy Jon, Amy and Tanya.  It was good to sit in a clean, quiet place and have a nice glass of wine with the pork chop special.  I got to hear wonderful stories from the staff about post tornado experiences.  It sounds like Lowry Cafe has been doing their best to support the cops on duty who are patrolling the Nomi streets. Free coffee and pastries for the cops in the mornings.  And from what I’m told, our own Chief Dolan had quite the experience at The Lowry Cafe while he was in there for breakfast on Monday morning.  He noticed a mom and her three kids sitting on the curb, crying.  They’d lost their apartment and just about everything in it.  He approached them and talked for a bit and invited them in for a good meal before getting them the connections they needed.  Thanks Lowry Cafe and Chief Dolan!

Here below are a few more photos exhibiting the massive devastation throughout Nomi. A mansion on 29th and Newton really took it hard from trees in front and back, but looks like it held up well. 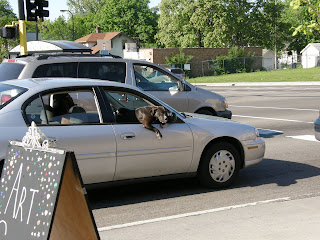 He doesn’t look storm damaged, but he was pretty darn cute.