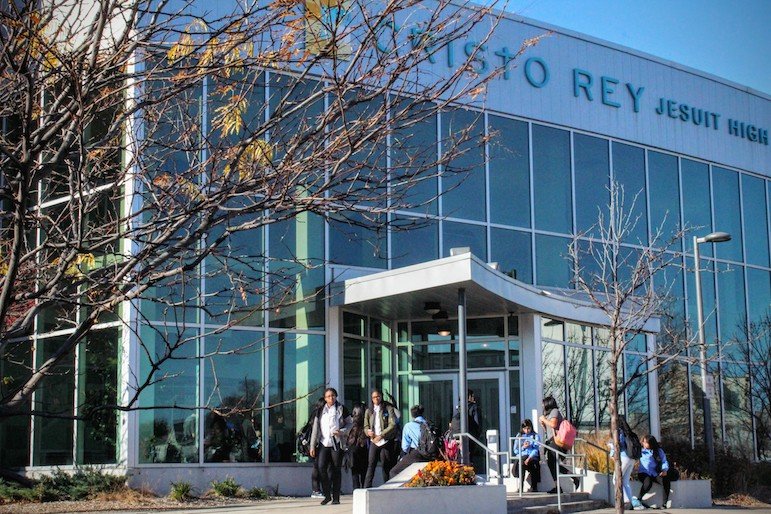 Cristo Rey Jesuit High School in South Minneapolis was one of 274 high schools that participated in a statewide mock election. Cristo Rey voted for Hillary Clinton. Photo by Cristeta Boarini.

Long before most registered voters went to the polls on Nov. 8, Minnesota high schools held a mock election to determine their own outcome of this year’s presidential race. Conducted by the Secretary of State’s office, the mock election’s first round of results – released on Nov. 2, six days before Election Day – had Donald Trump winning by a margin of 2 percent among more than 77,000 Minnesota high school students. Two days after Election Day, Hillary Clinton ended up winning the mock election by 319 votes, or a slim 0.33 percentage points – within the margin eligible for an official recount.

At first glance, the too-close-to-call results seem to contradict exit polling data, as young voters nationwide ages 18 to 29 voted for Clinton by a wide margin in the real election. The mock election was even closer than Minnesota’s presidential election results, where Clinton won by 1.52 percentage points. However, the mock election results belie a more complex level of youth engagement within the world of politics, in not only who youth say they support but also in how they choose to participate.

In a statement about the mock election, Secretary Steve Simon said, “The Students Vote 2016 initiative is about getting good habits started early and this year tens of thousands of young and soon-to-be voters had the opportunity to get invaluable, hands-on experience with the electoral process.” 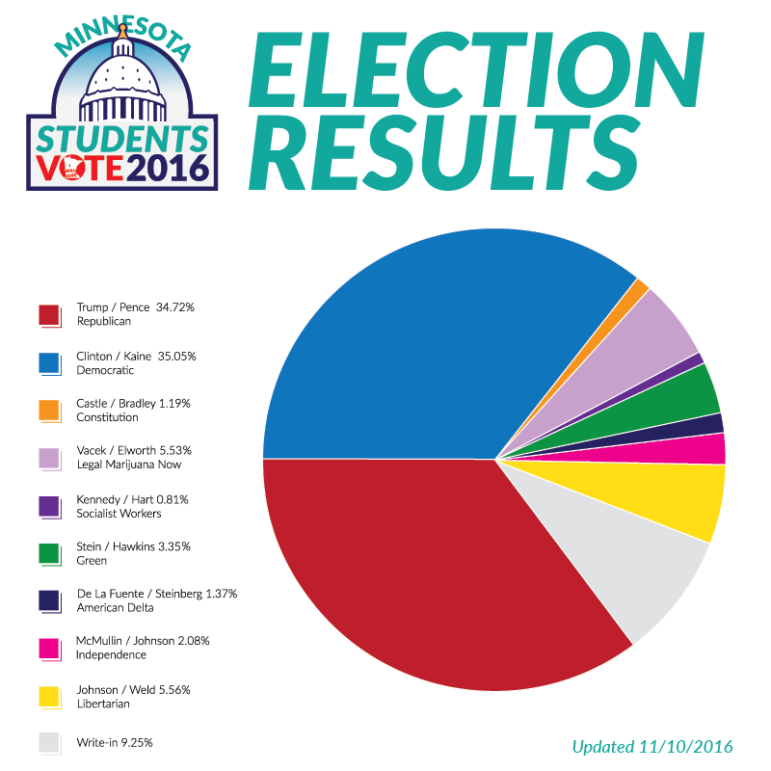 Graphic courtesy of the Minnesota Secretary of State.

But some students have expressed wanting to learn more than just good habits and hands-on voter booth experience when it comes to civic engagement. As tensions erupt and students come face-to-face with the bigotry fanned by the Republican campaign, they don’t want to just know how to vote. They want to know how to advocate for themselves – outside the voting booth.

“In a way I was glad that Hillary lost because if she became president America would go back to normal and nothing would change,” said Amanda Moreno a senior at St. Paul Central. “Whereas with Trump being president we can start the revolution that can help change America for the better. Trump has exposed all the racism and bigotry that’s been hidden under the carpet, and with that coming to light once again the people can fight against it and rid it for the upcoming generations.”

Far from a commitment to the ballot box young people are increasingly turning to protest and direct action. They care less about candidates and more about issues and they are ready to make themselves heard on those issues.

“I’m more upset that so many people agreed with him. That so many people voted for him,” said Angelica Bello, a sophomore at Southwest High School. Students across the metro echoed that sentiment and on Friday, Nov. 11, 250 South High School students organized a walkout and marched to downtown Minneapolis in protest of Trump’s election win.

Breaking down American myths in education leads to stronger engagement

Despite the charged school environment, not every student felt compelled to vote or protest. For many students, the “mock” election was just that – something to be mocked. And even though they are highly engaged with the issues, there was a disconnect between what they cared about and who the people representing them on the mock ballot were.

“Honestly, I paid no attention to them,” Moreno said of Clinton and Trump. “I think both of them were unfit for the job and it was all just about picking the lesser evil. So, it barely made a difference who won.”

When I asked Bello what subjects she thought would activate more young people like her, she immediately responded, “Teachers need to start talking about the actual world. We’re the future. There should be more communication.”

I asked Minneapolis resident and youth community health worker Kristina Sanchez-Standingcloud if she thought this type of education would make a difference.

“Ethnic studies needs to be mandatory – at all levels,” Sanchez-Standingcloud said. “Kids aren’t taught the truth about this country and they’re living a lie. That’s why they can’t handle it at older ages, because it messes with their identity. When you learn that the Constitution was influenced by the Iroquois Confederation, right down to ‘We, the People,’ and then about the attempted genocide of the Indigenous here, it’s devastating. Knowing that black folks were considered three-fifths of a human, so that quote doesn’t apply to them, is maddening. How many wars have Mexicans helped win, just to be deported after? If I would have known these things earlier, it definitely would have made a difference in my thoughts and actions.”

That connection between thoughts and actions is what young people say motivates them. They want people to understand what is at stake and not in a hypothetical way. Reports of attacks on POC, queer and Muslim youth in Minnesota are flooding in and the students know who the victims are, if it doesn’t happen to be themselves.

A former student of mine, now a freshman at the College of St. Benedict’s in Collegeville, Lupita Rubio Robles, posted on social media about an experience she had on campus. One of her white male counterparts at St. John’s University told her she wouldn’t be there next year because “people like her don’t deserve to be in such a prestigious university as St. Ben’s.” He called her an illegal alien (Rubio Robles is an American citizen), and those kinds of remarks are more and more hurled at marginalized students, a signal of who isn’t welcome in Trump’s great America.

One surprise with the mock election results is that 5.56 percent of the vote went to Libertarian Gary Johnson and 5.53 percent went to Dan Vacek of the Legalize Marijuana Now party. Both of these candidates – had this been the actual election – would have been eligible for state campaign funding based on these margins, as minor parties only need to gain 5 percent of the vote to qualify in Minnesota. Adding two more major parties to future elections would have drastically changed the face of the political landscape if the mock election reflected the real results.

As we look toward the future and the next generation of voters, these students wonder if household influence will sway young voters’ opinions, and the data seems to point to yes. Eighty-seven of the schools that participated in the mock election had eighth graders and younger participating – students who are arguably more influenced by parents and guardians than their older peers. Trump won by massive margins among the younger students, garnering 50.93 percent of the vote compared to Clinton’s 26.91 percent.

Truth is, at school and at home we force-feed youth the mythology about our country’s moral fiber, we tell them America is great and Americans are exceptional. Most importantly, we never discuss or acknowledge the divisive nature of our government and political systems, or the prejudice and bigotry they are based on. If this is the education our children receive, no amount of school will effectively combat Trump-like bigotry.

Voting is important, there’s no doubt about that. But it is not the only way to produce change. As the country’s demographics shift and more and more folks wake up to the truth of our institutions, we can turn to more direct action and education to holding our country accountable to its ideals. And like always, the young people are leading the way.