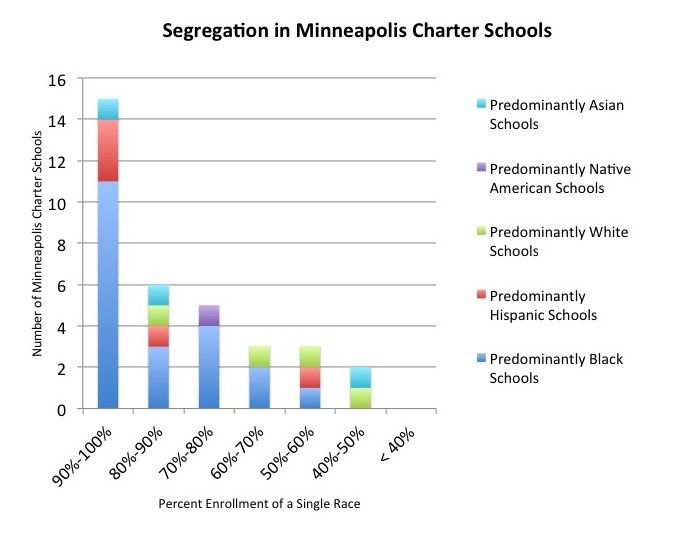 According to data released by the Office of Civil Rights, all 44 Minneapolis charter schools have a student body that consists of over 40% students of a single race or ethnicity. Of these schools, two are completely racially segregated, meaning there are only students of one race enrolled in the schools, and 13 others have over 90% students of one race or ethnicity. A total of 10,949 students were enrolled in Minneapolis charter schools during the 2011-2012 school year.

The chart above shows the number of Minneapolis charter schools by the predominant race of their student body. The colors on each bar represent the dominant race in each school. Placement on the chart shows the percent of the student body made up of a single race. For example, the red chunk of the far left bar shows that there are three Minneapolis charter schools that have an enrollment of 90-100 percent Hispanic students.

All of the data used to make this chart comes from the Office of Civil Rights (OCR) data for the 2011-2012 school year.

Why are charter schools so segregated?

New Millennium Academy’s (98% Asian) mission is  “to build a better life for our students by creating an environment of high academic achievement while preserving Hmong culture and literacy.”  Harvest Prep School/Seed Academy’s (98% Black) mission is “to instruct, empower, enable and guide African American Children to achieve superior academic, social and moral development.” Aurora Charter School’s (98% Hispanic) mission is “to operate a center of learning that embraces academic excellence and celebrates the gift of Latino culture.”

The OCR data also show that the majority of charter schools and students are Black. Out of the 37 schools with demographic data (excluding the seven Minnesota Transitions schools with only district-wide data), 22 of them have predominantly black student bodies. And of the 8,131students who attend these schools, 4,466 are black. The pie charts below compare the racial demographics of Minneapolis charter schools to Minneapolis Public School (MPS) district schools and show that many Black students have left the MPS system in favor of charter schools. 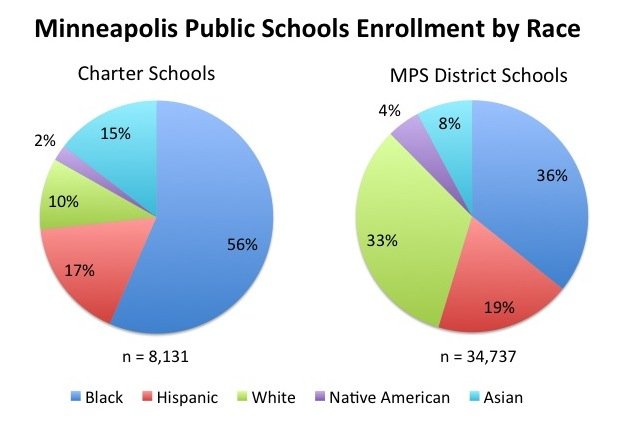 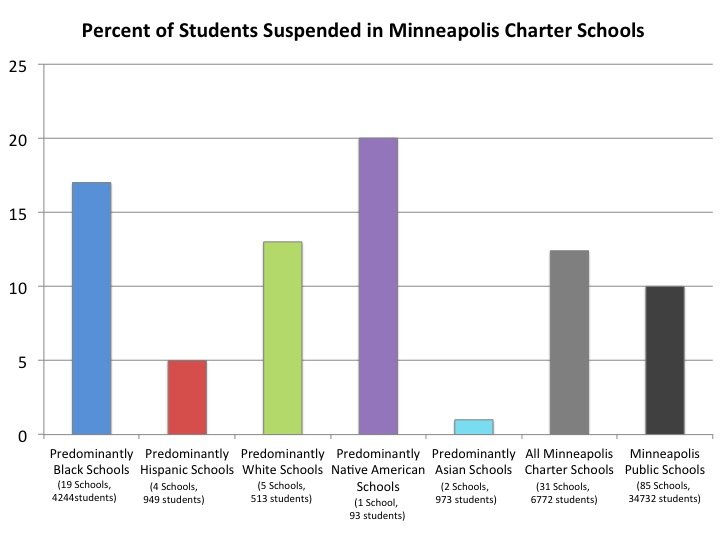 This chart does not include the Minneapolis Transitions Charter School District.

For two of these schools, Bright Water Elementary and Harvest Prep School/Seed Academy, information about disciplinary actions for the 2011-2012 school year was available on the Minnesota Department of Education website. These schools were included in the chart, however their numbers include expulsions and exclusions as well as out-of-school suspensions, which may lead to some slightly skewed data. Bright Water, a predominantly White school with an enrollment of 123 students had zero disciplinary actions and Harvest Prep, a predominantly Black school with an enrollment of 429 had 128.

Two schools, Minnesota School of Science, which closed in 2013, and Friendship Academy of Fine Arts, had no data from OCR or MDE on out-of-school suspensions or disciplinary actions, respectively. These two schools are not included in the chart.

Two other schools, New Millenium Academy and Minneapolis Academy, are also not included in the chart because they provided no information on out-of-school suspensions to OCR and their discipline data on MDE was ambiguous. Each of these schools had an asterisk for their discipline data which means there are anywhere from one to 19 disciplinary actions for their school. MDE says it replaces cells with numbers between one and 19 to protect student privacy.

What other effects do segregated charter schools have?

It is clear that many Minneapolis charter school students are not learning alongside students of diverse races. Data also shows that these segregated schools suspend their students at different rates from each other and mostly at higher rates than MPS district schools.

What other questions about race in charter schools are worth asking? And, what other implications may racially segregated schools have on students?

The spreadsheets used to analyze the data in this article can be found here.

This is one of a number of articles produced by students at Macalester as part of a New Media class.
CORRECTION: The segregation chart at the top of the article was omitted in error – it has now been published.