There are some hopeful signs for education policy coming out of the new federal spending bill, and not just for the programs that got big wins. In addition to restoring most of the federal money cut during the sequester, the bill also includes some tweaks to school turnaround that suggest a rewrite of No Child Left Behind (NCLB) might actually be possible at some point.

One of the big winners is Head Start, which received a $1 billion funding boost, roughly half of which will go to Early Head Start. While Head Start serves kids closer to entering kindergarten, Early Head Start helps those between birth and three years of age. It’s a sign that early childhood education is continuing to accrue strength as a political issue.

Dramatically boosting Head Start enrollment (including going beyond the funding this will allow) would set us up to have a much higher percentage of students from under-resourced families ready to go when they show up to kindergarten. When most students show up ready to go, teachers can focus on helping everybody move forward on time instead of playing catch up with many students.

Other big changes affect the School Improvement Grants program, aimed at schools identified for turnaround. Under NCLB, and perpetuated under the Obama administration, such schools only had four options, ranging from firing the principal and instituting schoolwide changes to outright closure. (It should be noted that all the options involved losing at least the principal.) 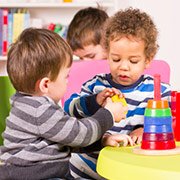 The new spending bill would allow partnerships with outside organizations to institute “whole school reform.” Importantly, it also gives states the freedom to design their own turnaround options, subject to approval from the federal Secretary of Education. Another change pays the grants out over five years, instead of the three currently allowed. If Congress can hang together on this, it suggests that they might finally be able to rewrite NCLB and move us out of the current arrangement, which either inaccurately identifies and punishes schools as failures or leaves states subject to waiver conditions set by the federal Department of Education.

Other programs getting funding increases include Child Care and Development Block Grants, career/technical education funding, Title I, and special education (although neither Title I nor special education are back to their pre-sequestration levels).

This bill is a sign of progress, although there’s still a lot to do. As with Minnesota building its way out of the hole Pawlenty dug, undoing the sequester’s damage will take many steps. It’s also worth remembering that federal funding only makes up about 10% of the typical district’s budget, so ensuring strong state support for education must remain a priority. Still, at least some important programs didn’t get cut further.