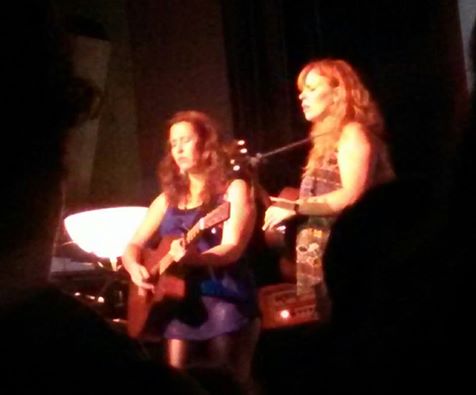 Friday, October 3 The Erickson’s released their latest album at the Cedar Cultural Center. It was clearly a very emotional experience for them and half of the fun was seeing how excited and grateful they were for the support of fans and colleagues. I don’t know them and I left a little drained!

The Ericksons are two sisters, Bethany Valentini and Jenny Kapernick. As sisters I suspect they’ve been singing together forever, but during the show they alluded to an eight year career together. Their interaction together on the stage is fun to watch. They appear very connected when they play together; they stand close together facing each and there’s a whole unspoken language happening. You can hear it in them music as their voices harmonize, then complement, then is a nice way compete. It’s like listening to pairs ice skating. There are time they sing together, there are times they do figure eights around each other and there are times that each voice shines alone.

I think of The Ericksons as being pretty folksy and they played a few older songs that were folk songs but the newer stuff is different. It’s move synthesized with reverberations and recorded tracks upon tracks even for the live show. They both have very pretty voices–reminding me a little of Cloud Cult. Although that may also reflect the deep, sometimes dark sometimes uplifting themes both bands present.

It was an added treat to have Mike Lewis and Molly Maher accompany the women for a few songs. Lewis played several instruments–but the saxophone was especially welcome. Maher is such an accomplished guitarist; she added a depth to the music. I caught the tail end of BBGUN, who opened the show. I always enjoy their music. And it was nice to have The Current host; they are able to elevate local music and local musicians. It’s rising tide that we can all support.

Borderline, a song off the new album, seemed to be a nice mix of folk and electro-pop. There’s a ticking on the guitar (presumably) that measures through the song that I think adds a dimension of timeliness to the lyrics as well as a strong beat to the tune. If you want a sneak preview of the album you can check out My Love online. It showcases the softens of their voices and shift from folk to pop.

I have to add that one of the best parts of the show for me was watching two sisters on stage–because I am half of a sister duo. I’ve already mentioned their apparent close connection but there was also a sisterly eye roll there too–in a loving, I’ve-got-your-back-but-you-are-goofball way! Although I may be projecting.