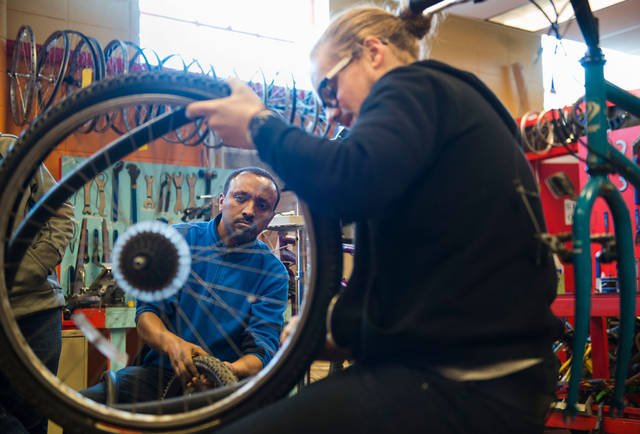 Earn-a-Bike student Wondey Geta observes as mechanic Ben Swanson demonstrates how to remove a bike tube at SPOKES on Saturday morning. Photo by James Healy, via the Minnesota Daily.

After a month of studying and repairing bicycles, two people will ride away from a small shop near the Cedar-Riverside neighborhood on free bikes.

A mile south of the West Bank, the nonprofit SPOKES Bike Walk Connect center began its Earn-A-Bike program on Saturday. The program, now in its third year, consists of a four-week course aimed at getting community members who might not otherwise be able to afford a bike on two wheels.

SPOKES attracts participants from around the Twin Cities area, including Cedar-Riverside residents and students from the University of Minnesota and Augsburg College.

Brad Carlson, a volunteer with the group, punched a hole into a tire tube on Saturday so that Augsburg chemistry senior and fellow volunteer Ben Swanson could teach two students to repair it.

Swanson said volunteering at SPOKES has helped him learn and dive into something outside of his area of expertise.

“It opened up a world outside of chemistry for me,” he said.

Swanson said he had planned to apply for graduate school and search for a job after he graduates this summer but now wants to ride a bike to Maine.

Carlson said he tries spending as much time as he can in the little workspace, which is filled with hundreds of broken bikes.

Before he was a volunteer, the program gave Carlson a mode of transportation after he overcame homelessness.

With grease-covered hands, Carlson described the different parts of a bicycle and what function each serves.

One of the two students at Saturday’s program was Wondey Geta, 40, who traveled from Columbia Heights, Minn., to begin the monthslong process of earning his first bike in more than a decade, he said.

“These guys are doing something that I’m drawn to,” he said, adding that he plans to volunteer with the center after he completes the four volunteer hours the program requires.

University of Minnesota graduate Joshua Weichsel sat in the storefront of the Hub Bike Co-op Mini-Store, which rents space in the SPOKES building, to sell the organization’s repaired bikes on Saturday afternoon.

Each bike sold at the Hub Mini-Store was repaired just a few feet away by SPOKES volunteers.

Funds from the bike sales are split between the two organizations, Weichsel said. SPOKES gets 70 percent of each sale, while 30 percent goes to the Hub.

“Our goal isn’t to make money. It’s to serve an underserved area,” Weichsel said. “The more people on bikes, the better.”