Back in 2009, there was a lot of talk about the “moral hazard” of bailing out big financial institutions.  The concern was that, once bailed out, the banks would learn that no matter what happened the Federal Reserve and government would be there to cover all of their bad loans – and thus make more.   In short, providing insurance for default makes it more likely that it will occur.

The term is something like a pop psychology term for the system of socialized risk that defines our entire financial system.

With the benefit of hindsight we can now ask whether or not the bad loans stopped after the big bailouts of 2008.  Did large financial institutions change their behavior and start to behave?  The answer, increasingly, appears to be no, there has been no substantial change in lending behavior since the bailout.  The “moral hazard” appears to be very real – big bets on big risks have continued without much change.  And that’s not only why there is a new crisis but also why serious policy changes must take place. 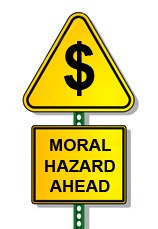 The term “moral hazard” is far from new.  In 2002 the International Monetary Fund (IMF) examined in detail whether their bailouts of nations and big banks actually encourages risk taking.  They found that it did, although they were not sure about the magnitude of the problem.  As they stated at the time:

As long as further evidence is needed to establish the magnitude of moral hazard, such action should proceed cautiously, weighing the possibility of moral hazard against other implications of the availability of IMF financing in alleviating the effects of crises.

Fast-forward to 2008 and the need for rapid bailout.  Caution was clearly thrown to the wind and enormous amounts of money were made available to financial institutions in trouble – damn the “moral hazard”.  How big has the effect been since then?

The poster child for the problem is MF Global, the investment house that made big bets on European sovereign debt in a clear belief that it would not be allowed to fail.  The counter argument against this being a case of “moral hazard” run amok is that they were a rogue organization, riddled with bad behavior and excessive risk taking.  But there is evidence that they were far from alone, with many big banks taking a lot of risk long after the bailouts.

It took a Freedom of Information Act request that went all the way up to the Supreme Court, but the some actions of the Federal Reserve since 2008 have been made public by Bloomberg.  A total of $7.77 trillion was sunk into institutions that were declared “healthy”, raising the question why they needed so much in emergency loans in the first place.  Profits from this action totaled at least $13 billion for the banks.

This is far from a partisan issue, with icons on the left and the right weighing in on the topic (although each stresses different kinds of “moral hazard”).  The disclosure prompted this statement:

“When you see the dollars the banks got, it’s hard to make the case these were successful institutions,” says Sherrod Brown, a Democratic Senator from Ohio who in 2010 introduced an unsuccessful bill to limit bank size. “This is an issue that can unite the Tea Party and Occupy Wall Street. There are lawmakers in both parties who would change their votes now.”

More disturbing than keeping Congress in the dark is how so much of this escaped the usual scrutiny from the Federal Reserve.  The Governor of the Minneapolis Federal Reserve (one of 13 people who should have had control over the situation), Gary H. Stern, said that he “Wasn’t aware of the magnitude.”  Clearly no one was watching what was going on.

The moral hazard is playing out very differently in Europe, where the Italian crisis is quickly coming to a head.  Strong action by the European Central Bank (ECB) has been slow to come in part because German Chancellor Angela Merkel insists that a framework of control be in place before any big bailout occurs.  Can they act in time to save the big institutions?  Is the sovereign debt crisis moving beyond Europe to Japan, among other nations?  The need for quick action is now being weighed against the moral hazard and the gears of bureaucracy are slowing things down.

The latest revelations about how the US system has handled the crises so far are making the case for caution around the world.  Something will have to change.

In the meantime, the world’s financial system remains almost paralyzed.  There will be no easy way out as the old regime will fall, one way or the other.  Will those who worry about “moral hazard” win and make major changes to how things are done?