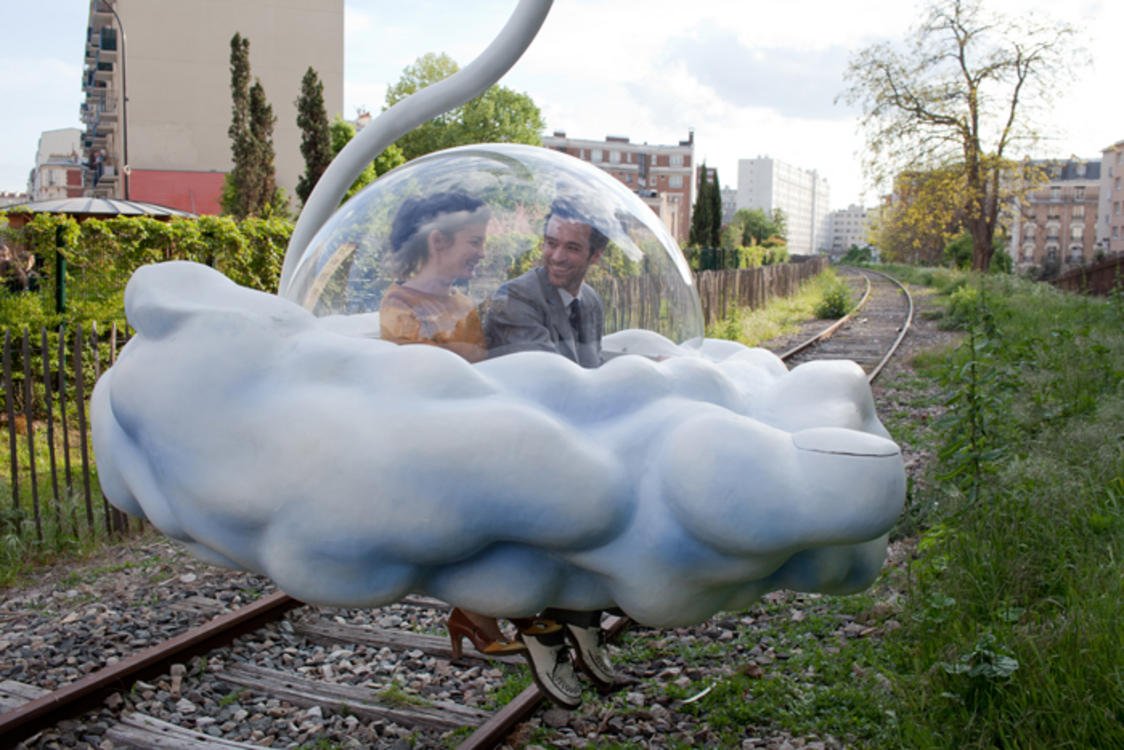 Mood Indigo (2013) is Michel Gondry’s seventh feature film in thirteen years. I am inclined to say he is known for his considerable music video work, having directed close to a hundred of these, but general filmgoers will remember Eternal Sunshine of the Spotless Mind (2004) and possibly The Green Hornet (2011). His short films and art installations have been featured at the Walker Art Center in the past. Gondry brings a dreamlike fluidity to nearly everything he does, though the flourishes are most notable in his narrative films. His most extravagant moments recall art house films of the past, they bring surrealist and experimental elements to mutate Hollywood formula. Mood Indigo is no different, though it has no multiplex aspirations.

Colin (Romain Duris) begins as a frustrated single man that laments how his oddball friends Chick (Gad Elmaleh) and Nicolas (Omar Sy) can be in relationships but he is not. The friends orchestrate an encounter with Chloe (Audrey Tautou) and after an awkward conversation about Duke Ellington, they begin the kind of romance that happens once in a lifetime. Life has its way with all of the friends; Chick’s obsession with the author Jean-Sol Parte leads him into financial trouble, and Chloe and Colin encounter their own troubles. As the film leaves the frantic dreams behind, it drops into black and white and leads us to an ending that is not diffused by the wonderland imagery that gets us there.

The first fifteen minutes of this film will delight fans of this kind of cinema. There are numerous references to films by directors such as Caro and Jeunet, Gilliam, Bunuel and Miike. The call-out to Delicatessen is unmistakable. Unrestrained by reality and conventional narrative, this opening shows us that the only constant in this cinema world is human emotional connection. The world of Mood Indigo is an abstraction and expression of Paris, with very little to connect it to the Paris on a map. There are mice who mime, there are cloud cars that are flown over the city via giant cranes, there are television chefs who reach out of the screen to help you make dinner. Each scene offers a new distortion, a new treatment that warps mis-en-scene but enhances the narrative.

Mood Indigo is an adaptation of the novel Froth on the Daydream, by Boris Vian. Vian was a friend and contemporary of Jean-Paul Sartre, and the constant references to Partre are a play on Sartre’s writing. There have been many films in the last few years that have attempted to capture the dreamy flights of literature in visual form. These have had mixed success, having to compete with the imaginations of those who had read the source books. Nearly all of them use CGI to create their fantasies, but Gondry has chosen to use a combination of physical animation and digital production to create his kind of unreality. This is delightful, especially in the shadow of summer movies like Transformers: Age of Extinction, but some audiences might find this a bit too arty and quirky. Not everyone is looking for a manic Wes Anderson.

The performances are equally artful. Expression is exaggerated, mannered and closer to a theatrical presentation than the intimacy of cinema. This works, for the most part, within the cartoonish activity inside of the frame, but it causes some distance to grow between viewer and character. There were times it seemed as if the actors were straining to compete with the visual delirium around them. Gondry has a keen grasp of visual art, and the most poignant moments in Mood Indigo happen in a photographic space not performance. Seeing Audrey Tautou in a film like this was a pleasure, but she didn’t have much opportunity to be as luminescent as she was in Amelie. Of course she shouldn’t play the same character all the time, but as it is there was little in Chloe that demanded she be played by someone as singular as Tautou. She could’ve done more.

There was a time when one of the hardest parts of adapting a novel was capturing the scope of the writer’s imagination in the limited media of film. This has ceased to be a problem for people with the means to make a modestly budgeted film, but this has also highlighted the real challenge to adaptation. Novels offer a range of intimacy that is tricky to capture on film. Time and medium offer a limited range to present the inner feelings and struggle of the character. Mood Indigo has this problem.

This is an engaging visual poem that begins playful and ends somewhere just short of transcendent. Emotional life pulses through the film, but it is not quite as strong as it could be. Whether it is because of the alienation caused by wonderland, or because of a narrative that doesn’t quite feel inevitable, the story of Chloe and Colin doesn’t have the soul it could. This detachment is often a weakness of animation, computer animation in particular, so it is unusual that a practical and old-fashioned film like Mood Indigo would have this problem. Then again, Gondry gives us a topsy-turvy world, and life on one side of the screen might only resemble life on the other.

(Courtesy: Drafthouse Film) Colin (Duris) and Chloé (Tautou) go on an adventure in a cloud-shaped gondola car in Mood Indigo.