It was a Saturday afternoon, and Max and I were driving into town, into the small northcentral Wisconsin citadel of Amery, population of 2,906.

We’d rounded a corner and spotted a man and woman walking along the edge of the gravel road. I, of course, lifted a finger from the steering wheel in greeting. They waved. A few minutes later, a pickup rolled by. I waved my finger at the driver, and he did the same to me.

It was after the fifth or sixth such encounter within five miles that Max, then about 14 years old, turned to me and exclaimed, “Mom, do you KNOW all these people?”

Well, of course not, but his question was understandable given our backgrounds.

Like him, and his sister Maggie, I’d grown up in the city. In my case it was the Bronx, NY, a place were you just didn’t wave hello to strangers in the street. My kids are products of Minneapolis; a smaller city, to be sure, but a city nonetheless, and one where a single-finger salute tends to be of a less than friendly nature. 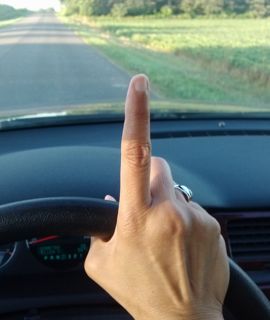 Since moving to farm country ten years ago, I’ve learned that while the “single-finger-farmer-wave” is the norm on roads winding through corn fields and cow pastures, even here it’s practiced with nuances. From what I’ve seen, men use the one-finger wave exclusively. They may add a slight nod (a remnant of tipping your hat). Women riding with men often do not wave, but if they do, they lift their entire hand. Women drivers have the most options: we can use a single finger, a flutter of several fingers, and, if we’re feeling particularly energetic, add and a nod.

I’ve got to tell you, I’ve become a big fan of this friendly expression. It encourages me to slow down a bit, and to look into the faces of the people who live within my community. In fact, I’ve taken this practice out of my car and into my pastures. As I mend fences or move my grass-fed cows to , or haul hay, I wave to motorists and bicyclists as they pass. Most wave back.

Do I know them all? Of course not, but I think I’ll have a better chance of recognizing them next time we cross paths at the farmers market or local ice cream parlor.

When I lived in a city of 8 million people, it was important to create a bit of distance when being jostled on crowded streets and standing elbow-to-elbow in subway trains. You made a point not to stare into someone’s face and challenge their envelope of privacy.

Staring directly at someone isn’t welcome in farm country either, but the opportunity to share a hello, to wave a greeting is there. Perhaps it’s because we live in a place where open spaces and weather conspire to keep us at a distance. Our farms are sometimes a quarter mile apart, if not further. The harsh winters discourage long walks that would take us past a neighbor sitting on the porch and willing to chew the fat for a while.

But it’s late summer, and the roads are open, the sidewalks clear of ice. We wave as we pass each other and remember that we’ve seen each other before.