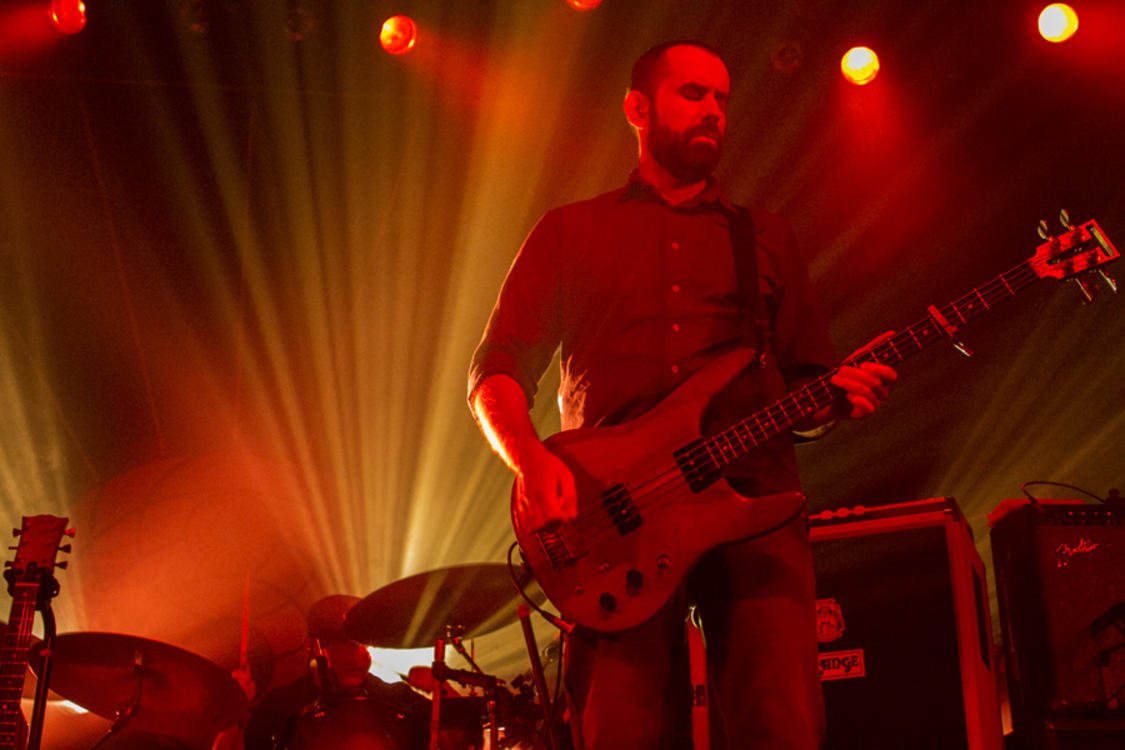 On Sunday, May 18, the post-rock instrumental band Mogwai brought their “Rave Tapes” tour to First Avenue mainroom. Not quite sold-out, the show still brought in a sizable crowd. Enough people to make the space look full, but still plenty of room to see or leave to get another drink if you were on the main floor. Mogwai have been around since 1995, and this show featured a handful of their earliest songs mixed in with some of the more epic songs from the last seven years. Based on the volume of the cheers as each song rolled out of the towering amps, I’d say they made the right choices for their set list.

Sitting here on this dreary post-Mogwai morning I have to wonder what Mogwai are like when they climb on their tour bus in the morning after a show like this. Are they chummy and full of antics? Do they eat cereal and tea while they watch video on-demand? Do they meditate toward the rising sun with their instruments in their laps? I consider these things, because on-stage, Mogwai is a strange creature, a weird creature. They don’t move around a whole lot, though lead guitarist Stuart Braithwaite often looks like he might fly off the stage as a result of an electrical spasm. Some people play their instruments, but he is one of those artists who are their instrument. Not too surprising considering the intensity this band has sustained for nearly twenty years. More than just a band on a tour, Mogwai is an event that happens to every city this visit or project they undertake. Outside of Braithwaite’s perpetual fusion, the rest of the band are mostly expressionless, perhaps even glum. For many other bands, this would make for a very boring show, but the intensity of the music and the often blinding light show made it very easy to forget they were even standing there making the music.

The stage featured the proggy analog art of the “Rave Tapes” album cover, with the twin hexagons set apart as neon lights which resembled eyes that watched over the entire crowd and band. The effect of this was not easy to miss, it appeared as if some great smoke and light speweing being unleashed its sound and fury upon its eager devotees. Mogwai, the band, were more like the handlers that wrangled King King into his cage. They controlled the beast of their music, so some extent, but ultimately it has a mind of its own. As the evening progressed, as our eyes and ears became more completely commanded by this giant aural phantom, it became clear to me that this monster was out of its cage and run rampant through the smokey mainroom.

The band claims that they kept the name Mogwai (an evil spirit from folk lore and the creatures in Gremlins) because they couldn’t ever think of anything better. I think this is a bit of a riddle, because the name fits them perfectly. In the press photos they seem like a group of unassuming Scottish fellows, but once they step on stage they shape-shift into something entirely different. There was no water, and the show started well before midnight, but something happened to these guys when they walked that short flight of steps onto the main stage. Even Braithwaite’s unassuming and humble bursts of banter, delivered in his native brogue and always ending with cheers, seemed like they were almost an out-of-character aside to the audience. As if he was stepping out his Mogwai form to make us feel slightly less stunned by the mass of sensation that was let loose on us. Our guide for the show, our medium for the experience.

For the encore, the band came back onstage sporting a pair of Twins baseball caps. I don’t know if this is somethign they do, but it was a pleasant folksy touch that added a bit of personality to a group that previously were mostly statues at their temple of sound. The finale was completely awe-inspiring, probably made more so because the performers suddenly looked much more like the people on the floor. They weren’t magicians, anymore, they looked like regular guys that just happened to be yolked to some undefinable spirit that had outgrown their control. Then, they walked off the stage. Unlike the creatures that inspired them, this Mogwai shrunk back into their cuddly and furry forms. They might have had a beer or two.  They probably went to sleep wondering where they had been the last few hours and why their ears were ringing like klaxons.

Majeuere opened the show, and his brand of electro-prog rock made perfect sense as an opening act. He composed sweeping synth scapes that recalled Vangelis, Kraftwerk or more modern darkwave acts from behind his collection of keyboards and mixers. His music was interesting and engaging, but the crowd seemed generally disinterested and I overheard a few grumbles about “watching a guy play his computer”. A stronger light show, or a video screen would have offered enough visual stimulation to keep more of the audience’s interest. Perhaps even a little bit of banter would have limited the distance and disengagement he presented to the crowd. I saw Zombi, a project he is a partner in, when they played the Varsity and that was a much more engaging performance. Perhaps in the future,his solo shows could be less “zombie.”