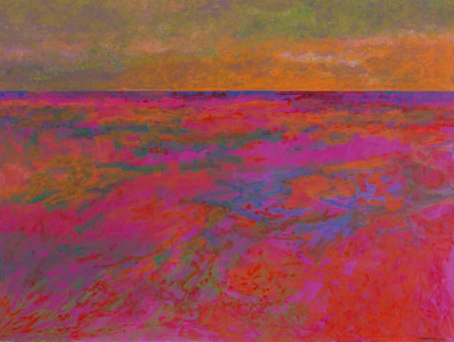 April 17 marks the passing of Minnesota artist George Morrison (1919-2000) 15 years ago. Seeing the exhibition Modern Spirit: The Art of George Morrison on view through April 26 at the Minnesota History Center in Saint Paul, reinforces his powerful, although under-recognized, voice in the aesthetic arch of 20th century art. Comprising some 80 works, Modern Spirit makes relevant the deep well of ideas that Morrison explored and refined over a six-decade career.

The Minnesota Museum of American Art (MMAA) in Saint Paul, and Arts Midwest, Minneapolis, organized Modern Spirit, and much of the work is from the museum’s collection. W. Jackson Rushing III, the Eugene B. Adkins Presidential Professor of Art History and Mary Lou Milner Carver Chair in Native American Art at the University of Oklahoma nimbly curated Morrison’s paintings, prints, drawings and sculpture into an evocative, comprehensive whole. This is the final leg in a five museum-tour that began in June 2013 at the Plains Art Museum in Fargo, ND.

Morrison’s life is a peripatic journey that takes him from Minnesota to New York City to France and back again. He was born one of twelve children in Chippewa City, a village that no longer exists on Lake Superior’s North Shore. An Ojibwe, he was a member of the Grand Portage Chippewa Band. At an early age he showed considerable artistic talent. After high school he studied at the Minneapolis School of Art, now the Minneapolis College of Art and Design where he graduated in 1943 with a scholarship to study at the Arts Student League in New York City. In this growing center of the arts world, he rigorously explored such abstract art movements as Cubism and Surrealism and became aware that Picasso and other modernists were inspired by ideas central to African and American Indian art.

Modern Spirit opens with several of Morrison’s early representational works, such as the oil on canvas landscape “Mt. Maude” from 1942. It then quickly moves into a memorable cache of highly abstract paintings and drawings from the late 1940s and early 1950s where works like the watercolors Sun and River, 1949, and Abstract Composition, 1950 reveal the influences of such European notables as Joan Miró, Arshile Gorky and Adolph Gottlieb.

Morrison’s first solo show was in 1948 at New York’s Grand Central Gallery.  After winning a Fulbright scholarship in 1952, he left New York for Paris to study at the École des Beaux-Art for three months and then at the Université de Aix-Marseilles in Antibes. In France he sharpened his modernist vision to a fine point captured in such resolved compositions as the ink and watercolor drawing Paris, 1952 and the oil on paper Untitled (Cap d’Antibes), 1955.

Morrison returned briefly to Minnesota’s North Shore in 1953, where he reconnected with Lake Superior’s horizon line, a motif that later became central to his artistic practice. He moved again to New York City in 1954 and lived in Greenwich Village. He ate and drank at the legendary Cedar Bar with such Abstract Expressionist luminaries as Franz Kline, William de Kooning and Jackson Pollock and continued to show his work.

By the 1950s Morrison’s artistic production reveals his instinctive command of abstract form, his uncanny sense of line, and his keen understanding of how color makes a surface vital or passive. Red Painting (Franz Kline Painting), 1960, a luminous stretch of red oil paint punctuated by slender eruptions of black and yellow, confirm his Abstract Expressionist chops. Part of a trade with Kline, Red Painting hung in Kline’s studio and his Provincetown home.

Morrison later taught in Minneapolis, Duluth, Dayton, Ohio, Cornell University in Ithaca, Penn State and New York City, before accepting an assistant professorship at the prestigious Rhode Island School of Design in 1963. Here, he and his artist wife, Hazel Belvo, discovered Provincetown, Cape Cod where he again was impressed by the sea and the horizon line. He also began to scavenge driftwood, a material integral to his late 1960s and 1970s work. One of the show’s most seductive works, due to its simplicity, is Art As Illusion, 1967, a small rectangle of driftwood demarcated by an implied horizon line. Such modest works are incubators for his forthcoming monumental wood collages like New England Landscape II, 1976, and his soaring square wood Red Totem I, 1977, with its satin-like surface.

In 1970 Morrison returned to Minneapolis to teach Art and American Indian Studies at the University of Minnesota until he retired in 1983. He lived in a renovated church in Saint Paul with Belvo and son Briand. In the mid- 1970s, they acquired land near Grand Portage on Lake Superior, which they named Red Rock for the local jasper.  Red Rock would soon become both a home and studio, and it was where George spent much of his time after retiring.

It is widely known that Morrison did not self-identify as an Indian artist saying, rather, “I am an artist who happens to be Indian.”  As Kay Walking Stick writes in the exhibit’s award-winning catalogue, “Morrison did not play the ‘Indian card’…George was an Abstract Expressionist.”  Thus, Modern Spirit raises critical cultural questions about racial and artistic identity – how one artist, who happens to be Indian, forged a meaningful path in the very white mid-20th century art world.

Morrison may be less recognized than some of his former New York colleagues, but his work is never derivative and, as Modern Spirit substantiates, his practice often illuminates our received knowledge of these other artists. Moreover, his oeuvre reflects a unique and flexible vision within the broad boundaries of Abstract Expressionism

I first met George in the late 1970s, and we became friends and colleagues after I reviewed his Northern Lights show for New York’s Arts Magazine. We went to museum shows and Pow Wows, attended lectures followed by dinner, where we debated the vagaries of the art world and Minnesota winters. I initially saw Modern Spirit at the Plains. Seeing it again was thrilling, like bumping into a dear friend after too much time apart.

To see Modern Spirit only once would be regrettable. Like a good book, it begs for more than a single reading to understand its narrative mysteries, it visual daringness, and its inspired intricacies. To miss the exhibition entirely would be tragic. Why? Because Modern Spirit is not only achingly beautiful, but it is also a scholarly gateway to understanding the eye and hand of a remarkable 20th century modernist artist, one who happened to be Minnesotan and happened to be Ojibwe. It will not happen again any time soon.

Modern Spirit: The Art of George Morrison is on view at the Minnesota History Center through April 24th.

For more information, go to: