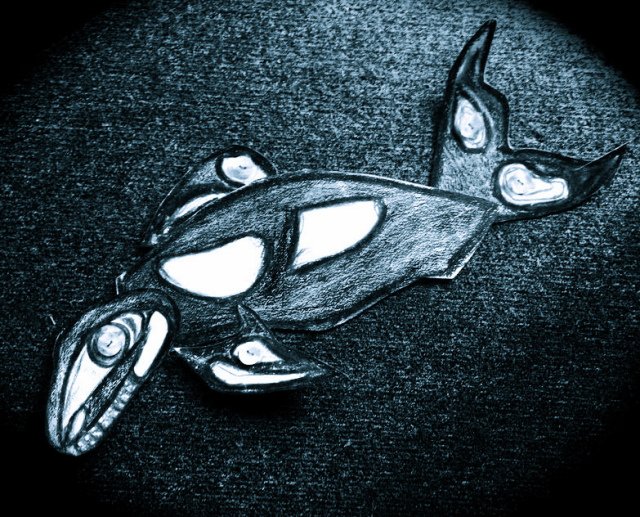 I was home sick yesterday, swaddled in polar fleece, sipping Phở Tái and channel surfing. I decided to watch the recently released movie Blackfish on Apple TV. This documentary about killer whales that perform at theme parks like SeaWorld brought to mind my life-long attraction to animals that interact with humans in ways that are–well, human. I grew up with Robbie, a black and brown dog I adored. I watched and wept over heart-tugging TV shows like Lassie and Flipper. And even though I was just old enough to find Dr. Doolittle–the Rex Harrison musical film version–rather ridiculous, the idea that animals had languages we could learn and that would enable us to connect peacefully with them made deep, personal sense to me.

I really loved Flipper. He was a smart and fun loving bottlenose dolphin (Flipper was a male but I learned that the role was played by various females with names like Susie, Kathy and Patty). This altruistic dolphin pal regularly saved the boys Sandy and Bud from danger and then romped with them, nodding and laughing with a rapid-fire “Heh, heh, heh!”

I know that I am not unique in feeling a sympathetic bond with certain animals, nurtured no doubt by such TV shows, films and books that I consumed over the past 50 years. After seeing the film Blackfish I wonder, is this the culture that brought about such a dramatic change in the life of cetaceans? Whales, dolphins and orca whales (a type of dolphin with a variety of names; I like orca best) have gone from being the monsters of Moby Dick to obedient performers who swim and exchange smooches with their human handlers at places like SeaWorld. It’s the fulfillment of my childhood fantasy.

Orca whales, beautiful for their graphic black and white markings and stunning geometry as they arc through ocean waves with tall dorsal fins until quite recently were not a creature to be trusted, especially by fishermen who saw them either as fearsome enemies, prey or as competition for fish. According to the Vancouver Aquarium web page, A Remarkable History Of Killer Whale Research At The Aquarium, ”a Browning fifty-caliber machine gun was mounted at Seymour Narrows” in 1961 to cull the invading hordes of killer whales.

In 1964 the artist Samuel Burich was commissioned to create a life-size sculpture of an orca for the Aquarium. Orcas range in size from 15 to 25 feet and can weigh up to six tons. Presumably needing a model, the artist and a fisherman went out to harpoon an orca whale. That idea alone boggles my mind, for art’s sake? What happened next ushered in an era of surprizing discoveries about orca whales.

The whale they harpooned did not die immediately and a decision was made to tow it back to the aquarium alive. So little was really known about orcas that fisheries experts did not even know exactly what to feed the whale. For several months before it died, the injured whale was studied and displayed, and became the subject of fascination, adoration, and unfortunately, popularity. 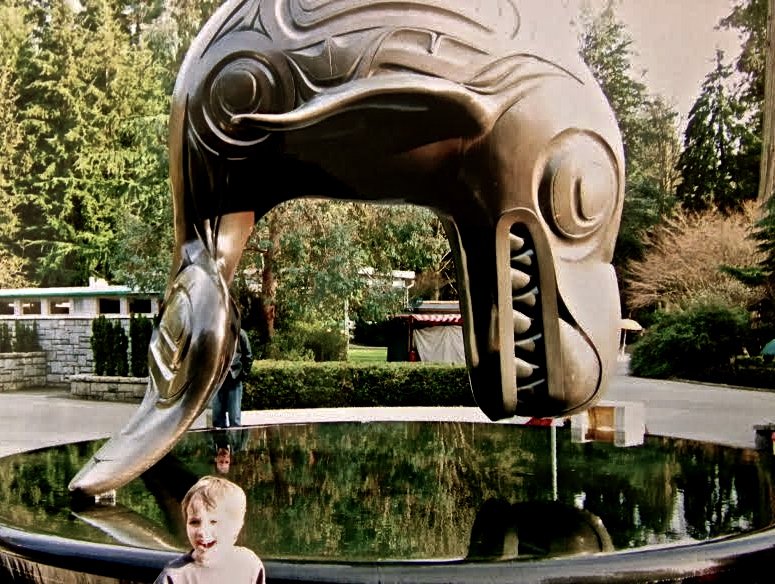 Moby Doll, as the whale was named, marks the beginning of the era when orca whales became an attraction for aquariums and theme parks around the world. (I was interested to read that the artist Samuel Burich helped take care of Moby Doll and completed his sculpture which hung for years from the ceiling of the foyer. Reportedly he had a change of heart and regretted his role in the capture of Moby Doll. If you visit the Vancouver Aquarium now you will find a beautiful sculpture, Chief of the Undersea World, by Haida artist Bill Reid.

Pretty quickly, fishermen began to capture live orca whales to sell to theme parks. Park managers learned that orcas were more gentle than terrible, and intelligent in a way that made them trainable. The entertainment program for audiences evolved rapidly and amazingly. I visited an orca show at SeaWorld in San Diego back in the seventies on a family vacation. I don’t remember much about it except that the whales leapt out of the water for fish, waved their fins and then splashed the crowd. We laughed with delight and then worried about the wet camera. Over the years, orca trainers amped up the entertainment value and started swimming with the whales, allowing themselves to be raised above the water on their snouts and tossed into swan dives; they held orca fins in waltzing dances and invited the whales to belly up pool side for caresses and kisses. Captain Ahab would have been astounded.

Just a few years ago things changed. The film Blackfish focuses on an event in 2010 that led to an OSHA ruling that has now put orca trainers behind a barrier when working with the whales. The film takes on the entertainment juggernaut and points out how dangerous the industry is for both for humans and orcas. It relies heavily on interviews with former trainers who really did bond in a Dr. Doolittle way with the whales. The death of one of their own, trainer Dawn Brancheau at SeaWorld in Orlando, shocked them enough to see the danger of believing these whales loved them like Lassie or Flipper. They are now ardent advocates for the whales saying that the way the whales are treated at places like SeaWorld fails in both love and understanding. The group would love to see orcas left alone in the wild.

The film bolsters the case against capturing and confining orcas with evidence of many amazing things that have been learned in the past fifty years about the whales. Orcas are smart, emotional, cultural and perhaps most human-like in their reaction to captivity. It does not make them happy. The interpretation the film offers is that orcas become traumatized and sometimes, unpredictably, aggressive in captivity which is why there have been dozens of instances where orcas have turned violently on their trainers. There is also violence among orcas in captivity. One of the things that I learned from the film and would love to have another lifetime as a marine biologist to study: orcas around the world vary in their languages. Each pod and community has its own shared, learned and taught sounds and customs for communicating and interacting.

On a ferry boat ride out of Victoria, British Columbia, a few years ago I saw a group of orcas pacing the boat and leaping through the water. Standing on the windy deck I had a feeling of emotion deep enough to rattle my sternum and root me to the spot. I was filled with a kindred spirit watching the orcas and complete wonder. One thing seemed clear: there is a lot to be learned from these creatures; why presume we have anything to teach them?

At top: Orca puppet by Lisa and Jamie Steinmann