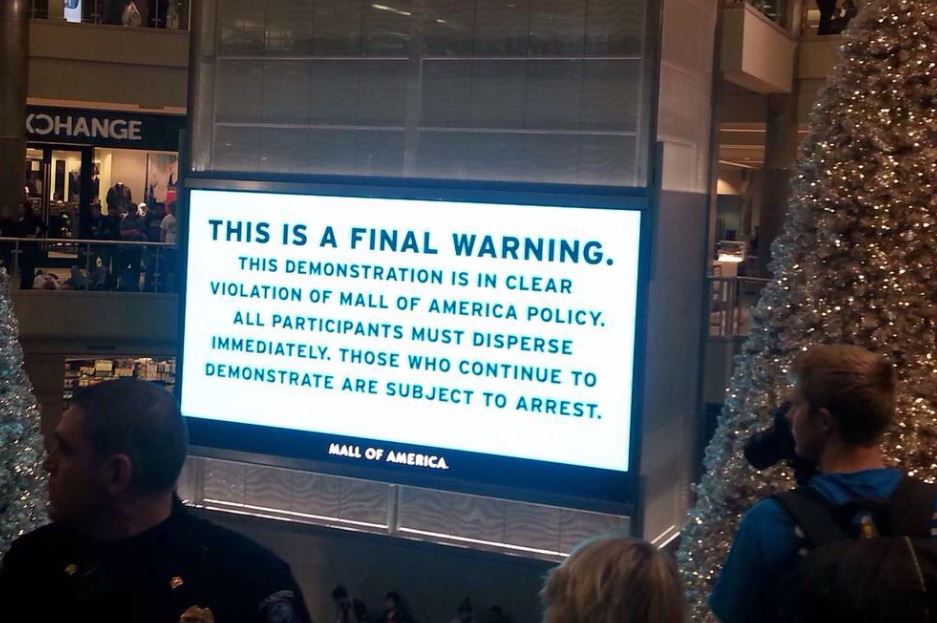 A warning at the #blacklivesmatter demonstration at the Mall of America.

The Mall of America (MOA) got caught with its underwear around its ankles last week when it tried to launch a #itsmymall Twitter campaign to promote the mall and to try to overcome the black eye it gave itself after its inane, but predictable, response to the peaceful anti-police violence protest last December.

MOA has been trying to prosecute, persecute and defame activists from Black Lives Matter Minneapolis, primarily because its protest took the position that the mall is public space, because it takes and receives public dollars and public subsidy. In an absolute stroke of genius, Black Lives Matter Minneapolis with its pro-Mike Brown, Eric Garner and anti-police violence protest in December, exposed the hypocrisy of private enterprise receiving public funding and public subsidy while enforcing private property rights.

By hosting a protest at the mall, Black Lives Matter treated the mall as a public space, a town square, since receiving public dollars makes it, well, public. Ironically, by launching a campaign (#itsmymall), implying that the MOA is the people’s mall, it makes the point of Black Lives Matter, which is, it is a public space. So which is it, MOA, our mall or your mall?

It also reveals that the MOA is experiencing financial pain as a result of the Boycott Mall of America campaign launched by Black Lives Matter. Black Lives Matter and all of us who joined the protest are correct: So-called private entities that take public monies (or public anything) that comes from taxpayers should not be afforded the rights of private property or private enterprise.

What Black Lives Matter inadvertently exposed was the slick underbelly of U.S. economics, and that is that this system uses its citizens and their money to support the enrichment of big business. It exposes the undemocratic workings of our so-called democracy.

I didn’t vote to give the Mall of America my money and neither did anyone else. Oops — my bad — some lawmakers who were supposedly elected to represent my interests (not the interests of the rich folks), gave them my money and yours.

And now the MOA has used the public resources of the city of Bloomington (the city with the love affair with Martin Luther King, Jr.) and its deceitful, dishonest and amoral prosecutor Sandra Johnson, to try to make the lie the truth through the force of unjust, but nevertheless legal, jurisprudence. As she said in her correspondence with MOA, “It’s the prosecution’s job to be the enforcer.”

Despite all of that, Black Lives Matter has still managed to expose the lie and in the process a group of volunteer Black and White primarily young people have managed to outwit, outmaneuver and make fools of well-paid (overpaid) professionals. Black Lives Matter, their supporters, and everyone who has articulated that Black lives don’t really matter to those who run this system are indeed right.

If Black lives really mattered in the U.S., then the city of Bloomington, the mall, lawmakers and others would encourage that the heinous and vengeful public nuisance, trespassing and disorderly conduct charges be dropped. They would say “You guys are right. We have a stain on the body politic. Police violence is indeed a problem. Let’s use all of our resources to put an end to this injustice.” But they won’t, because despite our illusions, wishes and hopes, it’s not as the saying goes, “that kind of party.”

Make no mistake, this is indeed a big deal. It’s why the government is spying on Black Lives Matters and the reason its leaders are being treated like criminals. It is extremely important that the government make examples of those who would challenge the principle or the idea that rich folks should be able to do whatever they want, even take your money and make private use of it. And it’s extremely important to the government that those who protest police violence be shut down, rather than shut down police violence.

This is a moment of clarity. These folks don’t, won’t, can’t play fair, but that makes sense when the entire system is unfair, corrupt and rotten. And just think — some folks think this is just about shopping.