The MNsure insurance marketplace is open for business, though not without some significant hiccups. As a trained MNsure Navigator, I’ve been doing my best to understand how the system is working for Minnesotans. Here are my impressions so far: 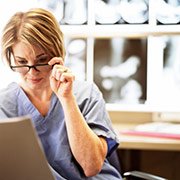 Overall, the MNsure website is quite promising. It makes it fairly easy to compare plans and costs, enroll each family member in a different plan, and see immediate eligibility for Insurance Affordability Programs (including Medical Assistance/Medicaid, MinnesotaCare, and premium tax credits). Once the site has worked out its numerous bugs, it’ll be a great resource.

However, MNsure.org’s design isn’t as user-friendly as I had hoped, at least not yet. There’s a lot of information to digest on every page. It requires a moderate degree of computer competency and overall comprehension of health-care concepts (premium, deductible, co-pay, etc.). I know that these will pose a major barrier to many people, including my clients—but that’s where Navigators come in. Navigators have completed roughly 15 hours of online training preparing them to guide people through their options.

The Navigator system is one black eye for MNsure; it’s been struck by many delays. Those applying as Navigators waited well past MNsure’s stated July 31 timeline to find out if they were approved. Contracts and background checks are still in process, and funding to outreach agencies was delivered late. The training, which was supposed to be available in August, didn’t come online until September 20. As of Thursday afternoon, MNsure had completed background checks on fewer than half of the Navigators who had finished the training, and less than ten percent of Navigator contracts were fully signed (it seems that MNsure has moved for-profit Brokers through the process more quickly than non-profit Navigators).

With insurance coverage starting no earlier than January 1 (and the first year’s open enrollment stretching through March) a few days’ delay isn’t going to make a difference in someone’s health care coverage. The only potential losses are those who become so frustrated with the system that they walk away, never to return. Navigators may also lose a few potential clients who have lost interest or become unreachable by the time MNsure actually gets Navigators fully approved.

I look forward to seeing MNsure develop over time. I hope that once they’ve worked out the glaring bugs, there is continued investment in improving the user experience. This may be a long shot, but I’d like to see planned “upgrades” (such as integrating applications for SNAP and other assistance programs) come quickly. None of this is cheap; MNsure won’t move forward if we quickly turn our backs on it. Let’s stay the course, remain committed to making MNsure work, and keep investing in our new marketplace.