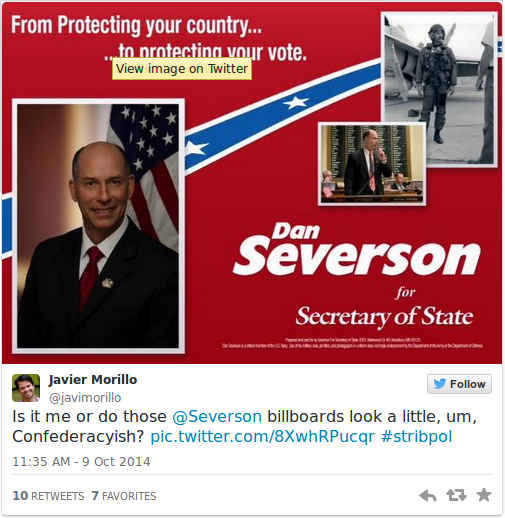 University of Minnesota graphic design associate professor Carol Waldron, who specializes in color theory and typography, isn’t the only one to see a curious message in Dan Severson’s design choices in his campaign for Minnesota Secretary of State (BSP noted Waldron’s take in U of M prof picks up on curious visual message in MNGOP Dan Severson’s SOS campaign logo).

Labor leader, DFL activist and fashion police podcaster at Wrong About Everything Javier Morillo-Alicea tweeted his response (embedded above).

Here’s what Waldron said to the MN Daily reporter writing a feature about the influence of design on message. In Campaign logos, colors influence message Kevin Karner reported:

Simon uses a default red, white and blue color scheme while omitting his party affiliation. However, the heavy use of blue emphasizes his background as a Democratic-Farmer-Labor state representative.

Severson also tries to indicate his party affiliation through color, but the placement of the blue ribbon with white stars over a red backdrop almost evokes the Confederate Flag — an odd choice for Minnesota.

Look at the billboard I posted. It is even *more* remniscent of a confederate flag because the bars are diagonal. It literally looks like the corner of a waving confederate flag.

Morillo had not seen our post about the design before tweeting his reaction to the billboards.