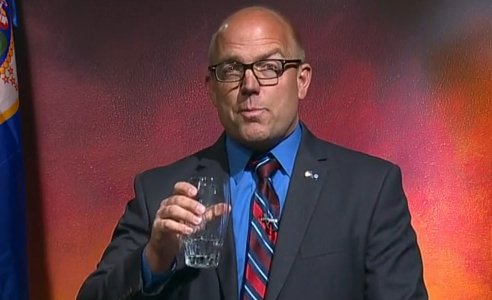 Rubio sipped in the middle of his GOP response to President Obama’s 2013 State of the Union address.

Miller raised a glass of water during the “Meet The Candidate” forum, but simply held it in front of him, then set it down. Nonetheless, the damage was done and Rubio’s moment brought to reader’s minds.

Bluestem had focused on the content of the moment in our earlier post, MN17A: Tim Miller calls minimum wage argument “political propaganda” that Republicans lost:

I believe the minimum wage argument is mostly political propaganda, but I admit that us Republicans have lost the battle on that propaganda.

The Prinsburg resident, who works for Habitat for Humanity in Willmar, picks up a glass of water, then sets it down while dismissing the raise that tens of thousands of Minnesotans received on August 1 as “propaganda.”

As we said, a number of readers have mentioned the Rubio moment it us.  And here we simply had been concentrating on the meanness of spirit that calls a raise for the  lowest paid workers “propaganda.”

Speaking of awkward, we’ll have more about this race later today, as we look at a mail piece paid for by the Republican Party that features a choice quotation by Miller–and the trail of corporate special interest spending attacking his opponent, Representative Andrew Falk, in this district.