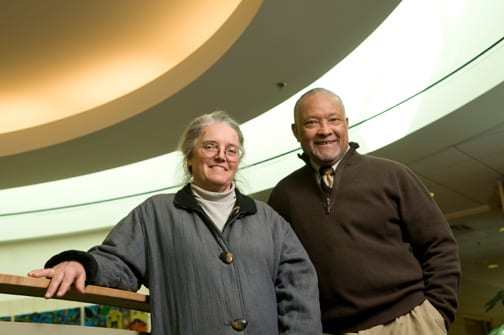 “There is no such thing as races,” Dr. Herbert Perkins said.  “There is only one human race.”

This ideal and the fight for social justice have become the life work of Dr. Perkins and Margery Otto.

“[Combating racism] has been a lifelong passion,” Dr. Perkins said, speaking for both himself and Otto.

And to their delight, they were honored for their work when The St. Paul Foundation named them co-recipients of the Facing Races Ambassadors Award.

“Having that affirmation, having that social approval…knowing that others appreciate the work we are doing [is encouraging].”

Dr. Perkins was a globetrotter.  He was born in Seattle, raised in Southern California and eventually, many years and many places later, landed in Minnesota, teaching at Hamline University.  Most recently, Dr. Perkins graduated with a Masters of Divinity from the United Theological Seminary in St. Paul.

Dr. Perkins said he is an admirer of Mahatma Gandhi and Oscar Romero for their “commitment to the people” and willingness to stand up to authority, and up for social justice.  But it was W.E.B. Dubois who was his greatest influence.

“[W.E.B. Dubois] is an intellectual hero, and someone committed to social justice and willing to stand up for his beliefs…a scholar,” he said.  “My first major high school paper was written on him and the NAACP.”

Meanwhile, Otto was growing up in Kansas City, Missouri in the 1950s.  At the age of 12, she said, her family began to move a lot, but she could always count on the family spending vacation time in Michigan during the summers.

“It was the only consistent place in my life,” she said.  “I still go there every year with my kids.”

Although she has lived many different places, it was in Kansas City, Otto said, that she saw a “strictly and brutally racially segregated”  world.  She was growing up white, she said, and like Dr. Perkins , Otto had also been inspired – by Mumia Abu Jamal and Dr. Martin Luther King, Jr.

“For Mumia Abu Jamal it would be that great truth telling that he does, the clarity and accuracy in his truth telling, and then Martin Luther King, Jr. for his way of calling us to our higher ideals,” she said.

With the harsh realities that segregation presented and the teachings of her idols in mind, Otto has created a life work in fighting racism.

Now, Otto is a lawyer and has worked on many racism-related cases.  She also teaches at United Theological Seminary with Dr. Perkins.

The two met while volunteering in an antiracism effort, and in 2006 they founded the Antiracism Study-Dialogue Circles (ASDIC) – for which they won the Ambassadors award – at Hamline University.

Dr. Perkins started the circles and the curriculum while teaching in Michigan, but he and Otto have built the program across the Twin Cities and have had about 500 participants and counting in the last four years.

The circles are four-credit, 12-week courses and the curriculum deals with the issue of racism and how it is present in all lives.  Participants share their perspectives and experiences, so that others may understand how racism affects everyone differently.

“Racism is this legacy that we’ve all received,” Otto said.  “None of chose to receive it.”

Many may ask, why the circles?  Well, Otto and Dr. Perkins said, the circles aim to build relationships across racial and ethnic barriers.

“‘Relationship’ is fundamental to human beings.  It is how we learn about ourselves and the world…and everything else that is fundamental to us.  It is how we construct our social realities by creating certain relationships among ourselves,” Otto said.  “Racism functions as a denial of relationship, cutting off the relationships that we probably would wish most to have, that human beings desire to have.  So in order to do antiracism, and to be in that work together, we need to do it together.”

However, in order build relationships, Otto said we must be able to talk about our experiences.

“I can’t sit with my book in the corner to really develop an antiracism lifestyle because I will learn so much more by being in dialogue with other people that are also working to change their own awarenesses and change the world around us,” she said.

Dr. Perkins also added that others act as a mirror, and through them we can understand and explore ourselves.  In addition, this self exploration allows us to understand and care about others, ultimately sparking a change in our patterns.

There are psychological, social, economic, and moral costs and losses, according to Dr. Perkins, that racism causes.

When the circles near the end, said Otto, participants being to feel a commitment to one another and are able to think in what Perkins’s idol W.E.B. Dubois called a double consciousness, or in other words, being aware of one’s self and of how others perceive you, simultaneously.  This double consciousness, according to Dr. Perkins and Otto, is what they hope circle participants will leave with.  But, ultimately, self-acceptance is what is needed.

Otto agreed and said it will never be perfect, “But we can love each other and support each other through the process.”

It is with that sentiment that they will continue to do antiracism work.