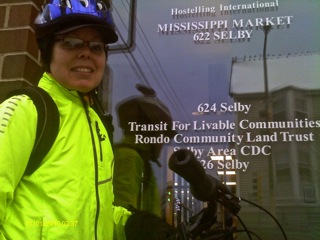 They start ticketing on Dale at four o’clock, Joan Pasiuk warns me. One avenue over though, I’ll probably find a spot. We’re making arrangements to meet at the St. Paul offices of Transit for Livable Communities, where she directs their successful Bike Walk Twin Cities program. It’s surprisingly solid parking advice from a woman who has been biking to work since the 1970s. It’s clear that Joan thinks about transportation a lot — even the kind she doesn’t use.

Transportation is a system, the way she sees it, linkages engineered to offer options for how to get where you want to go. Pasiuk poses the central question this way, “How do you build out a system that has a lot of connectivity to destinations?”

Minneapolis got a boost in this quest in 2005 when it was selected as one of four locations for pilot programs promoting non-motorized transit. Over the last seven years, (with Marin County, CA; Sheboygan, WI; and Columbia, MO) they’ve shared $28 million in federal funds. Charged with administering the Minneapolis area program, Transit for Livable Communities created Bike Walk Twin Cities (BWTC) and put Pasiuk at the helm.

BWTC has been busy. They funded 75 miles of new bikeways and sidewalk improvements. They provided startup and second phase funding to Nice Ride Minnesota, the on-street bike share people. They supported the U of M bike center, which opened in September. By backing the Community Partners Bike Library at Cycles for Change, they’ve extended their reach to less typical cyclists: immigrants, communities of color, and clients of social service organizations.

Pasiuk talks about this last effort with particular satisfaction. Slender, with a ready, steady gaze, she smiles as she recalls how a client stopped her on a recent visit to the Bike Library. “I was filling out a job application,” she says he had told her, “and for once I was able to say that I had reliable transportation.”

BWTC is also a success by less personal measures. In what they term a “robust effort” to measure changes in bicycling and walking, volunteers count bike riders and walkers once a month at targeted intersections. Once a year a complete survey is done. In addition to a straightforward count, it measures behavior, such as helmet use, and that bane of motorists, un-lit bikers after dark. Between 2007-2010, at 50 benchmark locations in Minneapolis, bicycling was up 33 percent and walking up 17 percent.

Pasiuk has observed changes during the thirty years she’s commuted on two wheels. Equipment has definitely improved. Once she’d sling a heavy chain around her neck. Today’s locks are light and compact by comparison. Studded tires are a boon in winter. “And lights,” she says, “We’ve had huge progress with lights.”

Accommodations for bike borne commuters are light years ahead. In the mid-1970s she rode her bike to an internship position with the State of Minnesota. The office building did not have a bike rack. She brought her bicycle up to her workspace and was told it was a fire hazard. In frustration she began locking it to the loading dock. They soon decided to install a bike rack.

Support for change is still not universal. Pasiuk acknowledges that there has been pushback. Some Edina residents have been critical of a project that creates bikeways by shifting traffic patterns. “It makes good use of an existing roadway,” says Pasiuk adding, “We can’t put trails everywhere.” The jury is still out on the effectiveness of some program innovations. One example is bike-boxes, a specially designated place for bikes to wait in the center of the road to make left turns.

Pasiuk has always liked the outdoors and being active. She grew up in the outskirts of Chicago in Joliet, Illinois. She remembers her family biking together for recreation. When she was a girl Interstate 80 was built through her hometown. Her whole family biked down the freeway the weekend before it was opened to cars.

While it’s not likely that bikes will re-take the interstates any time soon, it’s equally unlikely that Joan Pasiuk will be competing for the coveted parking spots near Selby and Dale. “When I was out there all those years using my bike as transportation I never thought of myself as being part of a movement,“ she says.

Certainly her leadership of Bike Walk Twin Cities has made non-motorized transit a better option for countless commuters. After new striping was completed on Riverside, a rider enthused in a letter to city hall, “the ride today was smooth, uninterrupted, and might I say eloquent.”

Ever been tempted to describe your morning drive to work as eloquent?