“I think everyone feels that they want to make where they live a better place.” In this matter-of-fact tone, Billie Young explained her life-long history of community involvement. Never content to just sit at home and do nothing, Young’s commitment to working to improve the community around her seems almost as natural as breathing.

Young’s contributions to St. Paul and the rest of the Twin Cities are as diverse as the cities themselves. The Science Museum of Minnesota, Regions Hospital, Minnesota Public Radio, the Landmark Center-these are just a few of the organizations that Young has served as a board member. Young’s role in shaping the St. Paul community extends beyond her board activities. She participated in the very first organizing committee for Grand Old Day in St. Paul. Her retail venture, the Old Mexico Shop, helped revitalize Grand Avenue during the 1970s and 1980s.

A highly mobile adult life never kept her from getting involved. Young’s husband, George, worked as a “large city schools superintendent,” an occupation that took the couple and their growing family to Guatemala, Colombia, Illinois, New Mexico, Ohio, and finally St. Paul.

Landing in St. Paul in 1970, Young immediately integrated herself into the city’s social and political fabric, volunteering her time with organizations such as the League of Women Voters. But simply attending meetings was not enough. Young explained that in 1971, “a lot of meetings for women at that time, the meeting was the object. I went to the meetings to get something done, or to organize something else, but the meeting was the [object]. I was just getting kind of bored with that.”

Young’s solution to that boredom was the Old Mexico Shop, where she sold Mexican crafts and folk art.  Young and her neighbor, Mary Wilson, opened the shop on Grand Avenue, which at the time was not the bustling thoroughfare that it is today. “A few stores were there,” said Young, “they kept their doors locked.”  The store and the street gained popularity, growing to Grand Avenue as we know it today.

After 22 years as a retailer, Young’s active spirit persists. She spoke about her thoughts on the transformation of Grand Avenue and its representation of St. Paul, her community involvement, and why she works to give back.

What was it like to be a part of Grand Avenue’s revitalization?

Well, my partner and I were the first women members of the Grand Avenue Business Association. Each new business that would come in was kind of a triumph for us, and we would celebrate it. Grand Old Day started when I was on the street. I was on the first committee for Grand Old Day. And the Grand Meander-those are all old promotions that a little handful of us got started. In a way…it’s still a great street. In the past, it was a little better because it had lower rents, and you had a lot of local entrepreneurs, and that’s what made it really interesting. Now we’ve got some national chains, and they just aren’t…they’re just more stable than the original fly-by-night local people. But they weren’t as interesting. We had a stained-glass guy and all kinds of really interesting local stores. And Selby has kind of taken over the role that Grand Avenue once held. The rents are lower on Selby. It’s kind of the entrepreneurial street now, which is what Grand Avenue was. But Grand Avenue is still a great street, a great asset. A lot of us spent a lot of time promoting the street. The Old Mexico shop was certainly a big part of it for a long time. 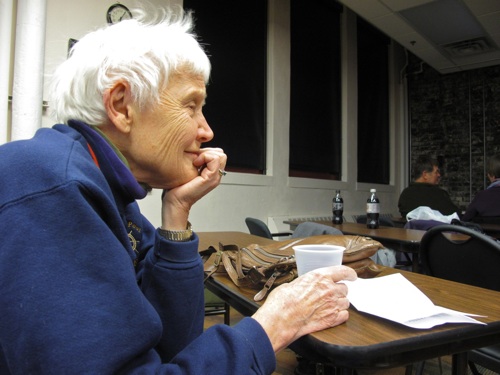 What are your feelings on the influence of national chains on Grand Avenue?

Well, we proved that the street could support that level of business, so when they first came, we were thrilled. That was validation of our success in promoting the street. But when a lot of them came, why, it makes it kind of like any other commercial street in the country. And for a while, we were unique, because we had stores that were unique to St. Paul. Now the Grand Hand up here is a great example of a store that’s locally owned and shows great taste, and so there’s still individual people on the street. But the big chains make us look like any commercial street, and we were pretty unusual for a while. But, it validated the fact that we were big enough and strong enough to bring them in. And I think it’s kind of an inevitable progression that that’s going to happen. And that’s the engine that drives Selby, so let Selby have it. Sure, let that develop!

So it’s a way of cycling through?

Could you describe your volunteer board activities?

Well, I’m a trustee at Regions Hospital, I’m a believer in Regions. It’s owned by Health Partners, which is nonprofit. I think health insurance really should be nonprofit, I think it’s obscene that they’re profit-making organizations. And I’m on the board at the Landmark Center, which is quite a monument to St. Paul, the old Federal Courts building. And it’s become a great venue for a great many people. You have, oh, gee, thousands of people come in now and most of the programs are free or very low cost, so that pleases me. I like that. Schubert Club has a gorgeous museum, if people haven’t seen the Schubert Club museum…It’s new, it should be toured. And the woodworkers’ gallery is another very unusual place in the Landmark Center.

What draws you into working on these boards?

Oh! Well, why not? Come on! [laughs] I think everyone feels that they want to make where they live a better place, and I certainly feel that way. I like St. Paul. I’ve been on the Science Museum board, Riverfront Corporation board, and it’s a lot of fun to think you’re making a difference, or you have ideas. Sometimes they’re good ones and sometimes they’re gosh-awful, but you know…No, I think that’s a pretty universal feeling for people in communities. A great many people want to be involved.

You’ve lived in so many different states and countries. Do you find that in St. Paul people are more involved than in other places?

No, I don’t think that’s…Every place I’ve lived there has been civic involvement. At least the people that I’ve know. You know, it depends on one’s social group, I presume, but, oh no, everybody I’ve known is interested and involved. We have different things. Everyone I know has some commitment to some nonprofit-arts, or public service organization that they’re giving their time to. It’s a privilege.