Lebanese-American writer Kathryn Haddad co-founded Mizna in 1999, when artists like her had no place to tell their stories.

“There was a frustration with the fact that the Arab-American voice wasn’t being heard in a multicultural kind of scene,” she said. “Nobody even was aware of it, or even if you tried to bring it up, they didn’t even know what I was talking about.”

Today the nonprofit Mizna, located in northeast Minneapolis, sustains a literary journal with national readership and hosts regular arts events. That Haddad and her colleagues started Mizna before 9/11 – after which many outsiders became more interested in Arab and Muslim culture – is an important distinction to note, she said.

Just weeks ago, Haddad began a leave of absence from Mizna’s executive director post. She plans to return to the group, she said, although she’s not yet sure in what capacity. 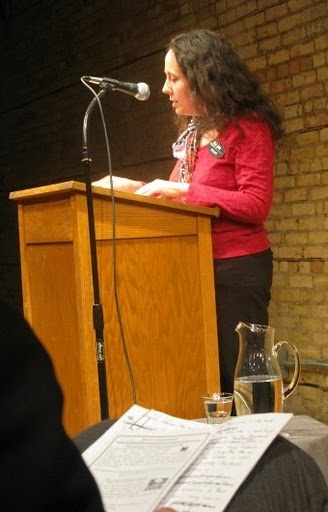 In the meantime, Haddad, who also works as a full-time high school English teacher in Bloomington and whose play, “With Love from Ramallah,” was staged at the Mixed Blood Theater in 2004, will use her newfound free time to pursue personal projects.

DP: You grew up in Coon Rapids with your mother, who had family ties to Minnesota, and your father, who originally came from Lebanon to the United States for college. Can you describe your first trip to Lebanon in 2000?

I was expecting it to be emotional, but I didn’t expect it to be as emotional as it was for me. Because I had never been there, I had only seen pictures, I’d heard of it, but for some reason, when I was there in my father’s village, I was choking back tears all the time. I just felt like crying the whole time, which is a very strange experience, to feel this connected and this really emotional about a place that I had never been to before.

I think it was because there was this longing that my father had instilled in us throughout our whole lives for this place. My dad was an amateur photographer, and he had taken these beautiful slides of his village, and so we grew up seeing that, all the time. On special occasions, we’d look at these huge pictures and he’d tell us stories, so for all of these years, I’d heard about it. And then to actually be standing in the spot was very overwhelming.

DP: Going back again to your childhood, can you talk about your grandmother, who left Lebanon to get away from the war?

She always wanted to go back and she couldn’t because of the war, and so she would cry. She would come to our house and she would cry about Lebanon. She couldn’t speak English, and my Arabic was very, very bad, but we could understand her from her face.

She would say over and over, “Lubnān, Lubnān,” and she would cry and cry. And that’s my main memory of my grandmother. She wanted to go back, but she couldn’t because of the war. And she was by herself, and she was old, and they didn’t want to send her back.

She died in California, and was buried in California. … It was a discussion when she died, about whether we would fly her back, and it was decided that wouldn’t be practical. And so, just knowing that my grandmother never came back was just really emotional.

DP: So when you finally were able to visit Lebanon, did you feel at all like you were bringing a part of your grandmother back with you?

I was the first one that hadn’t on my dad’s side. And the history is so old there. Here you don’t get that feeling of thousands of years of history, so just that overwhelming feeling that, I’m the first one who was not born here. And maybe a loss and longing for something that I never had.

DP: Are you religious?

DP: What drives you today?

I think one thing is justice, I think wanting justice definitely drives me.

As for Mizna and developing Mizna and doing that, it was a desire to have Arab-American stories by Arab-Americans out there, because there’s so much said about the Arab and Muslim community by others that is inaccurate, offensive, simplistic (and) stereotypical.

DP: Is there anything else you think is important for readers to know about you?

I’m hoping for the future, for myself personally, that I can still be an active force in the arts community in the Twin Cities, somehow, whatever it is. And I hope I can continue to use what skills I’ve gained through Mizna to be able to help other people.

I’d like to put my own work out there, but I also would like to see what opportunities there are to build structures that we need. You know, not only for the Arab American community, but for all people who need their voices to be heard.