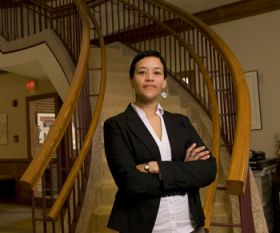 Growing in up in apartheid South Africa and witnessing her country’s first democratic election shaped the philosophy and character of Angelique Kedem, the new director of St. Paul’s Promise Neighborhood.

After receiving a Master’s of Public Administration from the University of the Western Cape, Kedem moved to the U.S. in 2001 at the age of 25. She taught developmental English in the junior college system in Texas, and then special education at an Oklahoma elementary school during her first year in the United States.

In 2002, she moved to Minnesota, volunteering for organizations such as the African American Teen Pregnancy Collaborative, the Women’s Initiative for Self Empowerment (WISE), and the State Council on Black Minnesotans. Kedem became the state director for the Juvenile Detention Alternative Initiative (JDAI), where she helped battle the disparities that affect children of color in the justice system.

Now, Kedem is at the helm of the Promise Neighborhood initiative, headed by the Amherst H. Wilder Foundation, as the project moves from a year-long planning phase into the implementation phase.

The planning phase, which took place over the last year, assessed the major assets and needs of the community, with a focus on “an effort to build a continuum of cradle to career supports that help ensure the success of all children in St. Paul,” said Kedem. “Essentially, the initiative’s focus is on having children show up ‘ready to learn’ — addressing the issues outside of the classroom to help children succeed in the classroom.”

The $500,000 federal planning grant the initiative received last year, along with over $150,000 from community donors, went to gathering the necessary information and developing appropriate strategies necessary to apply for a much larger federal implementation grant of $4 to $6 million, which would be spread out over five years.

St. Paul won’t know until December, at the earliest, whether or not they will receive the grant.

Until then, with funding from local foundations, the initiative will focus on implementing some core objectives in two low-performing and under-resourced public schools: Jackson Preparatory Magnet School and Maxfield Magnet Elementary School, both located in the St. Paul Promise Neighborhood target area, and both with a high population of children of color — 75 percent children of color, according to Kedem, with the majority being Hmong and African American.

There, they hope to create a hub where families can access resources and information on services, says Kedem, “such as housing, mental health and job information, along with culturally specific navigators to connect with families — parent engagement, tutoring supports and access to after school time programs.”

Work will also be done on securing in-school medical and dental care for the children and expanding access to Early Childhood Education.

The effort hopes to help close the achievement gap and address what Kedem calls the “big elephant in the room that no one has really touched yet,” the clear racial-economic disparities in Minnesota.

Kedem brings two things with her from her experience of growing up in South Africa.

The second thing, Kedem takes from the Truth and Reconciliation Commission, which is the organization that gave amnesty to those who came clean about their involvement in apartheid and offered their repentance — and that is to have the pain and the suspicions of the victims acknowledged.

“What I’m hoping to do is be an effective part of this collective that’s already begun,” said Kedem. “[That we are] truly hearing what people in the neighborhood are trying to say, that we’re really hearing what they need, that we’re using the community strength and resources, and that we’re building really strong equal partnerships between our formal systems and the community.”