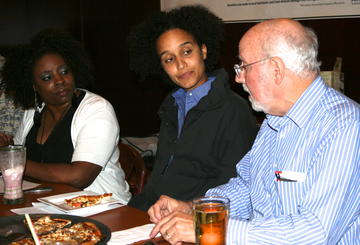 Alan Shilepsky likes talking, especially about politics and books. You can sit hours and hours with him in a good coffee shop and discuss politics and the world without getting bored. Shilepsky has strong opinions and does not hesitate to share them. He knows that he puts people’s backs up but it seems not to bother him.

I first met Shilepsky before the election to discuss the Voter ID Amendment, which he supported. In his years as an election judge, he always appreciated when people would show an ID, especially when they had complicated names. For Shilepsky, voting and being an election judge has a big importance – it is a civic responsibility and duty. He thinks that election judges are guardians of democracy and he is proud that people take this office so seriously.

Not only is Shilepsky disappointed by the defeat of the Voter ID Amendment, he is even more disappointed that Mitt Romney did not win the presidential election. Shilepsky is a convinced Republican, but this was not always the case.

When Shilepsky went to university, back in the 1960s, he was a very active Democrat. He took part in political campaigning, ranging back to Gene McCarthy (1968) and forward to Paul Tsongas and Bill Clinton in 1992.

He recalls a picnic in a park with SDS members during the summer of 1970, and an argument over the best way to build a fire and roast hot dogs. Three of the SDS members had been Eagle Scouts, which, Shilepsky said, is about as all-American as you could get.

That summer ended with the Sterling Hall bombing on August 24, 1970, a bombing organized by the “New Year’s Gang”  as a protest against the University’s connections with the U.S. military. The bombing killed one physics graduate student and injured others. “When this bomb got off, it changed my mind,” said Shilepsky. “It was as if I lived through a revolution.”

After the bombing, Shilepsky questioned his Democratic values and tried to accommodate, to find a nonviolent way of decision making. That questioning continued until, 25 years later, he changed his political affiliation and became a Republican.

Shilepsky cites President Bill Clinton as one of the reasons that he quit the DFL in 1995. At that time, he joined the Minnesota Independence Party (now the Reform Party of Minnesota) and ran in 1996 for state representative. Eventually, he became a Republican.

But still as a Republican, Shilepsky is critical. He is no blind follower, who agrees with everything. He criticizes the election campaigns and says that “both sides are demonizing each other.” He is convinced that the both parties are playing games in elections and that nowadays voters are too focused on one issue. Shilepsky calls this the “single-issue kill” and tells a story of a guy who said that he always votes for the candidate with the strangest name – so he voted for Shilepsky.

Shilepsky tells a lot of personal stories and revels in memories when he was active in politics. Since he gave up his political career, Shilepsky focuses on his work in his own computer consulting business. But a man like Shilepsky never quits politics. You feel his passion when he talks about it and there is always a little smile on his lips when he tells his stories.

When I ask him, how he feels about the outcome of the election, his smile vanishes and he admits that he is not happy at all.

In Shilepsky’s opinion, Obama is not strong enough to be president. He remembers an advertisement of the 2008 election campaign — Hillary Clinton said that Obama doesn’t have enough experience to be president. Shilepsky explains that the Benghazi crisis showed, for example, that Hillary’s campaign was right. He says this crisis was not handed well by Obama and Shilepsky accuses him of having hesitated several times before. Shilepsky says that we should remember that Obama “was the one that took three tries to finally pull the trigger on Bin Laden.” He says this proves that Obama is indecisive.

Shilepsky is scared that Obama will chose the wrong people for his team. Clinton, for example, will leave and the President will pick personally – “look how he viscerally defends Susan Rice against very reasonable questions. This is personal, and it should not be.”

In Shilepsky’s opinion, Obama is pretty hard to read and during the election campaign, he showed little of what he really cared about. Shilepsky accuses Obama of having stuck to certain projects just for the election campaign, like his plans for new nuclear plants. He questions whether Obama will stick to his plan of new plants or if he will just relicense old ones.

Regarding manufacturing, Shilepsky is afraid that “we will see more promotion of ‘blue sky’ technologies that are not developed enough to provide energy and transportation we need.” This demand of clean energy “will not run Google’s server farms or the average commuter’s car or house.” In Shilepsky’s opinion, this will harm America’s economy as Obama’s plans are too idealistic and won’t create manufacturing jobs for America’s middle class.

When I interviewed Shilepsky the last time, he also spoke about core values, which are missed in America’s society. In the “Three issues” article, Shilepsky stated that there “were middle class values which should be encouraged, so people make commitments again. The people should be able to choose eclectically from new perspectives, but they should also re-stigmatize behaviors that increase long-term poverty and dependence, and furthermore could hurt children’s life prospects.”

To stress what he means, Shilepsky tells a story about a child who bought himself an alarm clock to get up in time for school. His parents did not care and the kid had to take care of himself. Shilepsky thinks that in our society such behavior cannot be judged anymore. Everybody gets what they need but nobody expects to give anything in return. Shilepsky would like to see that “we encourage productive behavior by all our citizens, and encourage people to feel self-esteem for that, not for their consumption behavior.” And Shilepsky is afraid that the Democrats will fail to promote those values that matter to him.

Alan Shilepsky is a very passionate reader and every time he talks about a certain issue, he comes up with a quote or idea from one of the books he has read.

After the election, Shilepsky posted on his Facebook page “Tuesday killed the Mockingbird.” Following Harper Lee’s novel “To kill a Mockingbird”, Shilepsky tried to express his feelings. He tells that after posting this, he received a lot of anger from his friends. The ugliness, with which some people responded to his opinion and word play, said Shilepsky, showed him that a lot of minds are poisoned during this election campaign. The ugly politics and the ideological fight between the two parties were creating a “hate week.”

George Orwell is one of Shilepsky’s heroes and he compares the election campaign with Orwell’s book 1984. The “hate week” is designed to increase the hatred of the enemy. Shilepsky explains that the people do not recognize that this is the kind of thing the political parties do. Romney and Obama are just figures in a play and he further explains that America’s political system has developed from a party-centric system to a candidate- and money-centric system to an interest-centric system.

Different interests are splitting the different parties and the candidates are just playing their part in this system.

In his opinion, the Republican Party has to understand the need for compromise. The two main wings of the party, the libertarians and evangelicals, were very disappointing as they did not embody the idea of loyalty.

As Shilepsky talks about what the Republicans have to do, he expands his idea to the whole society. Nowadays, he says, people want to control everything and we want to have a perfect government that symbolizes our values to 100 percent. Shilepsky wishes that the society could accept imperfection, as there will be never a perfect government that represents everything, neither a Republican nor a Democratic one.

He believes that the interest-centric system we are living in supports just a certain kind of thinking and endangers our democracy. Shilepsky explains that he voted “No” against the Marriage Amendment; however he recognizes that some people voted “Yes” and this is the freedom of conscience. This diversity is great and in Shilepsky’s opinion one of the reasons for the success of the western civilization.

Our conversation draws to a close and our coffee is almost empty. But there is one thought left, that Shilepsky wants to share. He blames the mainstream media for reinforcing the ugliness of the election campaign by stigmatizing the Democrats and Republicans. Shilepsky accuses the media of calling them liars, but says that if we are honest, “in a real world everybody lies.” He is afraid that people are not skilled enough to evaluate what is right and what is wrong; what is important and what is not.

“I’m trying to reevaluate what is important at this stage of my life” and the media is definitely not a help.

UPDATED 12/12/12 with clarifications and corrections by Alan Shilepsky