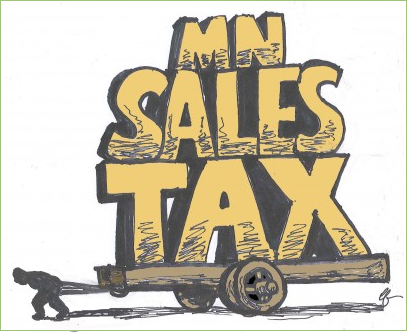 On December 21, Revenue Commissioner Myron Frans held the second of two minority business tax forums at African Development Center in Minneapolis. It was part of an effort by the Minnesota Department of Revenue to “get as much feedback as possible about tax reform and how the tax code impacts small businesses to ensure [Frans] is giving the best advice to Governor Dayton as he puts together his tax package for the 2012 legislative session,” according to a department of revenue community invite.

Present at the meeting was also Minnesota Human Rights Commissioner Kevin Lindsey. Commissioner Frans said that Minnesota’s current tax system is out of date and too complex. He also admitted that a simpler tax system is needed. However, the business people told the commissioner that any tax reform must keep people of color in mind.

“We are more than happy to pay our fair share,” admitted African Development Center (ADC) Executive Director Hussein Samatar whose organization works with the state’s African immigrant communities. Samatar was among a small group of business folk who attended the Minneapolis forum at the ADC. The first forum had been held one week before in St. Paul.

“I totally agree that we need tax reform, but I think we have to be careful about increasing [taxes] without helping the people who need the most,” said Sadik Warfa, a small business owner in Minneapolis.

Commissioner Frans admitted to Minnesota’s reputation of being a “high tax state” but said the state also has an unbalanced tax system: People ages 45-64 are paying more income taxes than any other age group. He also pointed out that job creation in Minnesota has been down since 2004. 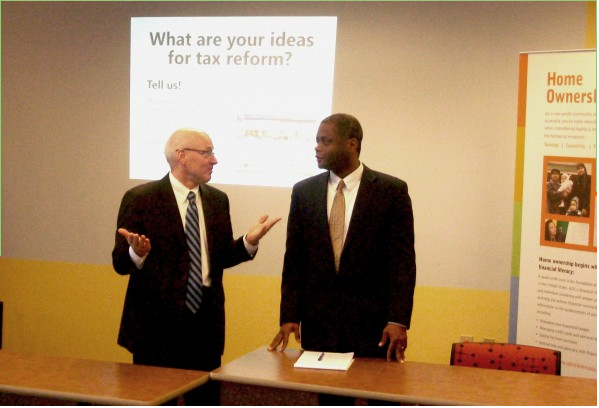 When speaking with the MSR later, Frans said, “Almost all sales taxes in general are regressive. Some of the things that we really look to and is concerning to us are alcohol and tobacco taxes [and] motor vehicle taxes. They all tend to be fairly regressive taxes because they tend to be paid at the same rate by the folk at the lower income bracket. Clothing taxes aren’t as regressive as some of the other sales taxes because there is an element of choice.”

The state should seriously look into lowering the sales tax rate, urged Abdikahman Kahin, who operates Afro Deli and Coffee, an ADC venture located inside the center. “Most of our customers are students and low-income customers,” he pointed out.

There is an estimated $400 million of lost revenue from online sales that is not taxed. “Every state loses [sales] taxes” on ‘e-commerce’ purchases, said Frans. “It’s a federal issue, and we hope Congress can fix it in the coming year.”

When someone suggested that tax breaks should be given to businesses who hire former offenders, the revenue commissioner responded that in Minnesota 40 cents of every dollar of state tax revenue goes to tax breaks; $11 billion was subtracted from $27 billion of the total state tax revenue in 2010.

“We have been looking at how we lower the overall rates so that employers and businesses pay a lower overall corporate income-tax rate, which would then in turn have them have the money to hire people as they need [them].

“If we can figure out a way to make it work and make it effective, we certainly are willing to look at it,” he continued. “Can we target something that is clearly needed for ex-offenders, or are we better off just lowering the overall [tax] rate and encouraging people to make those hires? That’s a tough question.”

After the forum, Frans told the MSR that he enjoyed “the give and take” between him and the early morning forum attendees. “This often happens…if you give the people who show up the facts and let them discuss the problems…and their suggestions are very enlightening for me because everyone has a different perspective. I learned a lot on how the system works and how it doesn’t work.”

The feedback he received will help him design “a tax reform package,” said Frans. “We will testify before the legislature [sometime in January], and we are working closely now with the new legislative leaders and the new tax [committee] leaders. I think for the first time in many, many years we have a group of leaders who really want to move this state forward,” he pointed out.

Samatar said the forum was very informative. “One, it became clear that we do need a [tax] reform that addresses the needs of the entire community,” he noted. “Secondly, the discussion was…that we need the reform but [also we need to be aware of] what the outcome is for the community.”

Samatar added that both Frans and Minnesota Human Rights Commissioner Kevin Lindsey heard from “many high-skilled people who work with small businesses who had specific issues with the [state revenue] commissioner [who could describe] what’s working and what’s not. I really felt that the commissioners were listening to what we had to say.

“We have to make sure that that shift [in taxes] does not impact more on people who have less,” Samatar continued. “We are asking for fairness and equity based on how much you are earning and how you spend it. It was really fantastic for them to understand [that] from the grassroots perspective.”

“It was a good discussion specifically from [a] minority business perspective and understanding what factors that needs to be taken into consideration by the governor and Commissioner Frans as they seek to find a fair and equitable tax system for all of us,” said Lindsey.