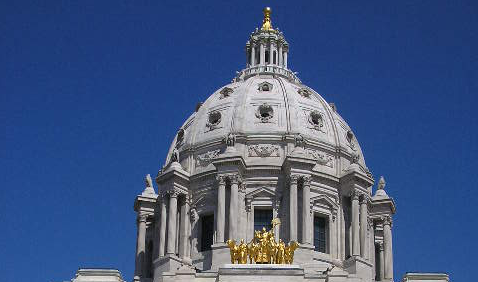 The majority leader in the Minnesota House is among 28 Republicans who have signed on to a bill that would block transgender inclusive school policies.

Republican Majority Leader Joyce Peppin signed on to the bill on Monday. She is among more than a dozen Republicans who have added their names to the bill since it was introduced in early March by 17 Republicans.

The bill is one being touted by anti-LGBT groups, the Minnesota Child Protection League and the Minnesota Family Council. The bill is a reaction to recent policies enacted in the Minneapolis and St. Paul school districts that increases safety and inclusion for transgender and gender nonconforming students. It is also a reaction to an appeals process put in place by the Minnesota State High School League that allows transgenders student to play on athletics teams based on their gender.

Bill proponents missed an important deadline on Friday. Bills that haven’t passed a committee by March 20, cannot move forward in the legislative process except for extraordinary circumstances such as a forced floor vote or attachment as an amendment to another bill that has made through committee processes. Both of those tactics were tried in the Senate last week. They failed.

The Minnesota Child Protection League has been applying pressure on Republican leadership over the past few weeks, criticizing House Speaker Kurt Daudt for not forcing the bill through and calling out Peppin for not signing on.

On Saturday, one day after the bill failed to meet the committee deadline, MNCPL slammed Republican leadership:

Who would have thought that Speaker Daudt would prevent the Student Physical Privacy Act, HF1546, from getting a hearing in the House Education Committee before tomorrow’s deadline? Education Chair Erickson has no committee hearing scheduled. She won’t hear the bill! In fact, she removed herself as an author before it was introduced on March 9th.

…This is unconscionable! In fact, with no hearing in sight, some who have been quietly opposing HF 1546 feel quite safe now telling their constitutents they support it after all, since no vote appears evident.

In an email on Tuesday, MNCPL continued the pressure:

“with hundreds of emails and calls to legislators to get them to move, the Minnesota House has not allowed the Student Physical Privacy Act, HF1546, to move forward.
Does that surprise you? Who is responsible for that?

If you’re hearing that the Speaker has no influence to determine what and how bills get to the floor for a vote, you’re being misinformed. While the Speaker can’t accomplish whatever he wants, he sets up priorities, allows action on bills to proceed, and usually succeeds in blocking what he wants to block. And he has innumerable avenues to promote the issues he thinks are important. In fact, here is what Speaker Daudt said concerning his own power:

As speaker of the House, Daudt realizes he has the power to steer public policy. “When you do your job, you want to solve problems and want to make positive impacts,” Daudt said. (January 3, 2015, ABC Newspapers)

The pressure appears to be working. In addition to Majority Leader Peppin, an additional ten Republicans have signed on to the bill bringing the total to 28. They are: Joe McDonald of Delano, Dennis Smith of Maple Grove, Marion O’Neill of Maple Lake, Bob Vogel of Elko New Market, Jim Nash of Waconia, Bob Dettmer of Forest Lake, Dale Lueck of Aitkin, Bob Barrett of Lindstrom, Mark Uglem of Champlin, and Dan Fabian of Roseau.