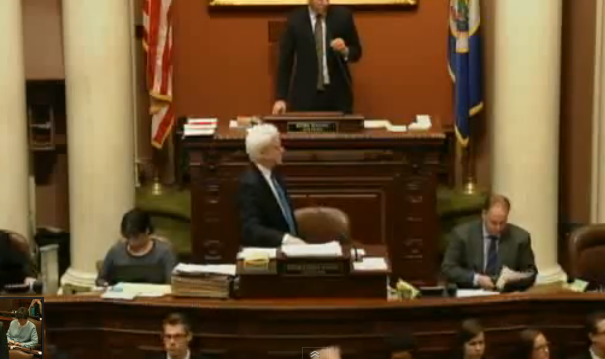 A deal apparently brokered between House Republican leaders, Senate Democratic leaders and Governor Dayton will allow the governor to raise the pay of his commissioners without legislative approval during a one day window on July 1, 2015.

Dayton drew the ire of Republicans when he notified them several weeks ago that he was using the authority the legislature had recently granted him to give his commissioners raises that put them at about parity with what they might get in the private sector. Since commissioner salaries had been prevented from rising significantly for the past decade, the resulting increases were large percentages, which Republicans said was too much and “cronyism.”

The political heat went up a few notches last Thursday when Senate Majority Leader Tom Bakk amended the bill so it delayed Dayton’s authority to give the raises until July 1 – the beginning of the next fiscal year. In a rare pubic show of high-level party disunity, Dayton called his fellow Democrat “conniving” and said he could no longer trust him. It took intervention from House Speaker Kurt Daudt, a Republican, to apparently make a compromise deal.

If a House-Senate conference committee works out the differences, Republicans will have the political satisfaction of saying they rescinded the recent raises and that it will be Dayton’s decision to put the pay raises back into effect. The bill rescinds the raises through July 1 and temporarily takes away Dayton’s power to grant the raises. It permanently takes away the governor’s power to grant raises without legislative approval on July 2.

With the one day window, Governor Dayton retains the ability to put commissioner pay at a market level rate. DFLers in the House and the Senate will also have the political cover of being able to say they voted against the raises.

Tangled up in this debate was the original topic of the bill: funding to cover unanticipated government expenses of the last year. This includes about $1.35 million to help out the Minnesota Zoo which had cost overruns from government mandated pay raises and bad weather that kept attendance and gate revenue down. It also includes about $10.4 million to deal with safety issues at the State Hospital in St. Peter and $2 million to reimburse state expenses from preparing for the Ebola scare of last year.

Debate on such a “deficiency” spending bill is usually non-political. However, as the House debated the bill which eventually passed on a 106-21 margin, members on both sides tried to score political points.

Rep. Steve Drazkowski (R-Mazzepa) was one of the loudest opponents of the bill saying all of the spending in bill could have been anticipated except for the Ebola scare. He blamed unions saying their agreement with the state was behind the increase spending at the zoo.

Rep. Ryan Winkler (DFL-Golden Valley) told Drazkowski that if Republicans voted for the bill they would be passing up an opportunity to stop the pay raises to the governor’s commissioners.

If you like political theater, watch the video of the full debate at the top of the story.

Below: just released salary study that helped Governor Dayton set the raises for his commissioners.