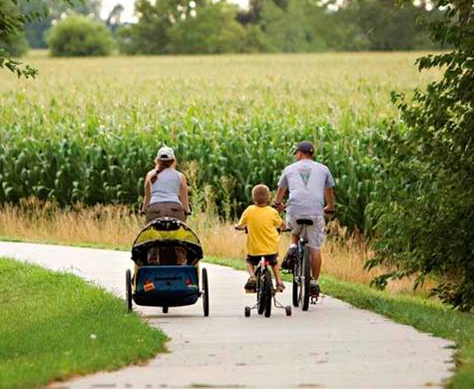 But this “core cities versus the rest of us” theme was definitely a big part of the Minnesota GOP’s 2014 campaign, and a lot of analysts are convinced that is why Republicans won. For instance, MinnPost’s excellent reporter Briana Bierschbach noted:

“…Republicans had a potent message, too, and it was a simple one: Rural Democrats had left their constituents behind by voting with their Minneapolis and St. Paul leadership.”

Exhibit A in the Republicans’ rural victimization case was funding for pedestrian and bike infrastructure, something Republicans often characterize as “metrocentric.” In other words, they maintain it isn’t of interest to suburban, exurban or rural citizens. For instance, GOP gubernatorial candidate Jeff Johnson tried to appeal to non-urban votes with this riff:

“We have spent billions of dollars on trains, trollies, bike paths, and sidewalks, but not nearly enough on the basic infrastructure most Minnesotans use every day: our roads and bridges.”

Beyond the campaign trail, that theme also has sometimes been a battle cry during Met Council transportation planning discussions. Finance and Commerce reports that:

“The suburban counties argue that the Met Council’s transportation investment plan emphasizes urban transit, bike and pedestrian options at the expense of highways, which they say could cause further congestion and safety issues.”

However, a survey released today calls the Republicans’ assumption into question. The poll found majority support in every region of the state for additional funding for pedestrian and bicycle infrastructure. The random sample of 1,000 Minnesotans sponsored by the Minnesotans for Healthy Kids Coalition found that the strongest support was in St. Paul and Minneapolis (71% support). However, there was roughly the same high level of support in the suburbs, which are key political battlegrounds because that’s where population is growing most rapidly:

In other words, if a politician mentions the DFL’s support of bike and pedestrian infrastructure funding in rural Minnesota they’re more likely to help the DFLer than hurt them.

The moral of the story is that the appeal of pedestrian and biking infrastructure improvements is hardly limited to the hipsters and fitness freaks in the core cities. Politicians who campaign or govern based on that false assumption may have a rude awakening.