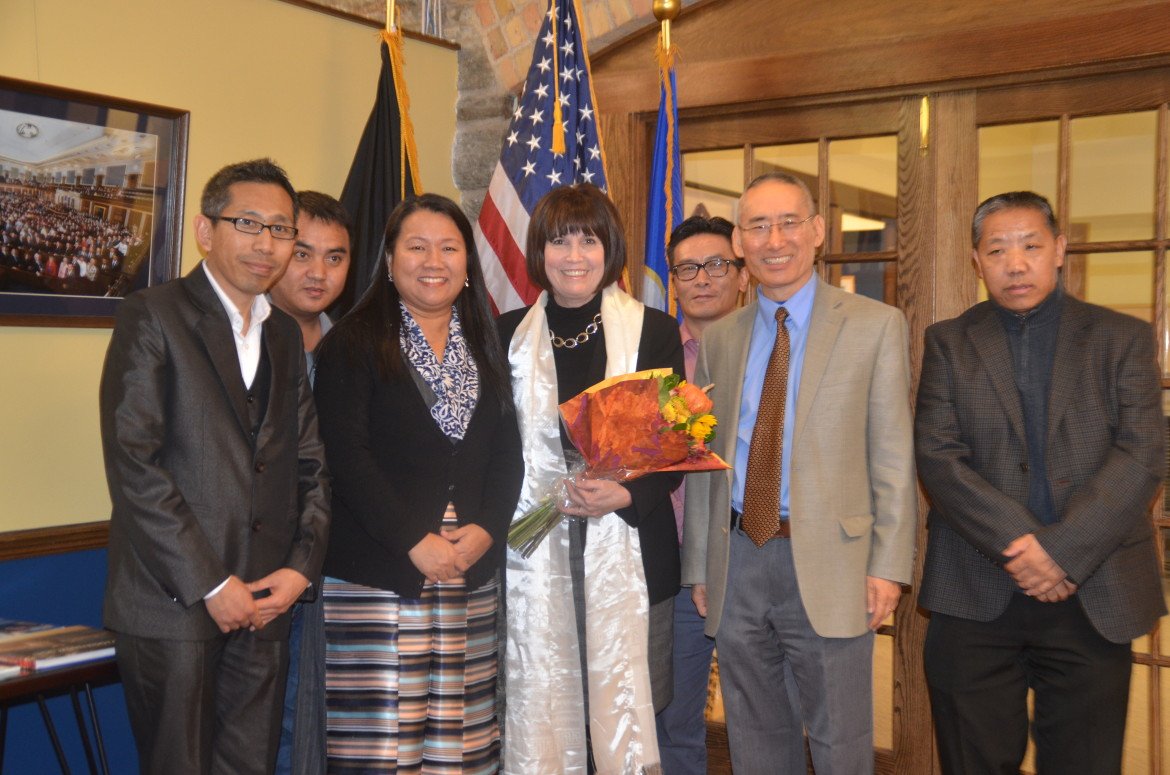 Board members of the Tibetan American Foundation of Minnesota along with Rep. Betty McCollum (center) at her office in St. Paul.

Rep. Betty McCollum (D-MN), one of the U.S. congressional delegation members who visited Tibet early this month is scheduled to share her Tibet trip story with the Tibetans in Minnesota some time this coming January.

Briefly speaking to the board members of the Tibetan American Foundation of Minnesota on Nov. 25 at her office in St. Paul, Minnesota, the U.S. congresswoman said that she particularly urged the Chinese leaders not to “interfere” in the Tibetan religious tradition of reincarnations.

“I told them not to appoint the religious leaders, because even as a ‘Christian,’ I don’t want anyone to appoint my pastors,” said Betty McCollum.

“I would like to speak about the trip and I also have some photos to share,” McCollum said.

McCollum and six others including Nancy Pelosi, leader of the opposition Democratic Party in the House of Representatives visited Tibet and Hong Kong early this month as a part of their official trip to China.

According to the delegation, the trip was meant, “to deepen understanding, increase mutual respect and further strengthen U.S.-China ties,” but the group also said that they had heated discussions with the Chinese leaders on several issues including the “religious and human rights issues,” in China.

Pelosi, a long time friend of the Dalai Lama and a strong critic of Beijing’s Tibet policy who was denied permission to visit the region six years ago, wasn’t afraid to speak out about her Tibet trip experience to the world immediately after the rare visit.

Following the rare trip, the leader of the opposition Democratic Party in the House of Representatives aired a statement in which the leader said that she conveyed to the Chinese government officials “the strong, bipartisan support the Dalai Lama enjoys in the Congress of the United States and among the American people.”

Many Tibetans on social media expressed their gratitude towards Pelosi for her timeless support and making effort to visit Tibet, and the Tibetan American Foundation particularly visited the Congressman Betty McCollum at her office in St. Paul Wednesday and thanked her and her delegation for making the rare trip to Tibet.

Tendar Tsering is a Tibetan journalist based in Minnesota. Previously he worked for several U.S. and Canada based news portals from India.